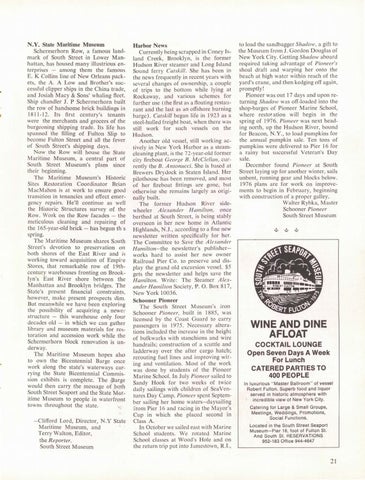 N.Y. State Maritime Museum Schermerhorn Row, a famous landmark of South Street in Lower Manhattan, has housed many illustrious enterprises - among them the famous E. K Collins line of New Orleans packets, the A. A Low and Brother&#39;s successful clipper ships in the China trade, and Josiah Macy &amp; Sons&#39; whaling fleet. Ship chandler J. P Schermerhorn built the row of handsome brick buildings in 1811-12. Its first century&#39;s tenants were the merchants and grocers of the burgeoning shipping trade. Its life has spanned the filling of Fulton Slip to become Fulton Street and all the fever of South Street&#39;s shipping days. Now the Row will house the State Maritime Museum, a central part of South Street Museum&#39;s plans since their beginning. The Maritime Museum&#39;s Historic Sites Restoration Coordinator Brian MacMahon is at work to ensure good transition in tenancies and effect emergency repairs. He&#39;ll continue as well the Historic Structures survey of the Row. Work on the Row facades - the meticulous cleaning and repairing of the 165-year-old brick - has begun th Âˇs spring. The Maritime Museum shares South Street&#39;s devotion to preservation on both shores of the East River and is working toward acquisition of Empire Stores, that remarkable row of 19thcentury warehouses fronting on Brooklyn&#39;s East River shore between the Manhattan and Brooklyn bridges. The State&#39;s present financial constraints , however, make present prospects dim. But meanwhile we have been exploring the possibility of acquiring a newer structure - this warehouse only four decades old - in which we can gather library and museum materials for restoration and accession work while the Schermerhorn block renovation is underway. The Maritime Museum hopes also to own the Bicentennial Barge once work along the state&#39;s waterways carrying the State Bicentennial Commission exhibits is complete. The &quot;lllarge would then carry the message of ,bqth South Street Seaport and the State Maritime Museum to people in waterfrpnt towns throughout the state. -Clifford Lord, Director, N.Y State Maritime Museum, and Terry Walton, Editor, the Reporter, South Street Museum

Harbor News Currently being scrapped in Coney Island Creek, Brooklyn, is the former Hudson River steamer and Long Island Sound ferry Catskill. She has been in the news frequently in recent years with several changes of ownership, a couple of trips to the bottom while lying at Rockaway, and various schemes for further use (the first as a floating restaurant and the last as an offshore burning barge). Catskill began life in 1923 as a steel-hulled freight boat, when there was still work for such vessels on the Hudson. Another old vessel , still working actively in New York Harbor as a steamcleaning plant, is the 72-year-old former city fireboat George B. McClellan,_ currently the B. Antonucci. She is based at Brewers Drydock in Staten Island. Her pilothouse has been removed, and most of her fireboat fittings are gone, but otherwise she remains largely as originally built. The former Hudson River sidewheeler Alexander Hamilton, once berthed at South Street, is being stably overseen in her new home in Atlantic Highlands, N.J. , according to a fine new newsletter written specifically for her. The Committee to Save the Alexander Hamilton-the newsletter&#39;s publisherworks hard to assist her new owner Railroad Pier Co. to preserve and display the grand old excursion vessel. $5 gets the newsletter and helps save the Hamilton. Write: The Steamer Alexander Hamilton Society, P. 0. Box 817, New York 10036. Schooner Pioneer The South Street Museum&#39;s iron Schooner Pioneer, built in 1885, was licensed by the Coast Guard to carry passengers in 1975. Necessary alterations included the increase in the height of bulkwarks with stanchions and wire handrails; construction of a scuttle and ladderway over the after cargo hatch; rerouting fuel lines and improving wiring and ventilation. Most of the work was done by students of the Pioneer Marine School. In July Pioneer sailed to Sandy Hook for two weeks of twice daily sailings with children of SeaVentures Day Camp. Pioneer spent September sailing her home waters-daysailing from Pier 16 and racing in the Mayor&#39;s Cup in which she placed second in Class A. In October we sailed east with Marine School students. We rotated Marine School classes at Wood&#39;s Hole and on the return trip put into Jamestown, R.I.,

to load the sandbagger Shadow, a gift to the Museum from J. Gordon Douglas of New York City. Getting Shadow aboard required taking advantage of Pioneer&#39;s shoal draft and warping her onto the beach at high water within reach of the yard&#39;s crane, and then kedging off again, promptly! Pioneer was out 17 days and upon returning Shadow was off-loaded into the shop-barges of Pioneer Marine School, where restoÂˇrntion will begin in the spring of 1976. Pioneer was next heading north, up the Hudson River, bound for Beacon, N.Y., to load pumpkins for the annual pumpkin sale. Ten tons of pumpkins were delivered to Pier 16 for a rainy but successful Veteran&#39;s Day sale. December found Pioneer at South Street laying up for another winter, sails unbent, running gear and blocks below. 1976 plans are for work on improvements to begin in February, beginning with construction of a proper galley. Walter Rybka, Master Schooner Pioneer South Street Museum