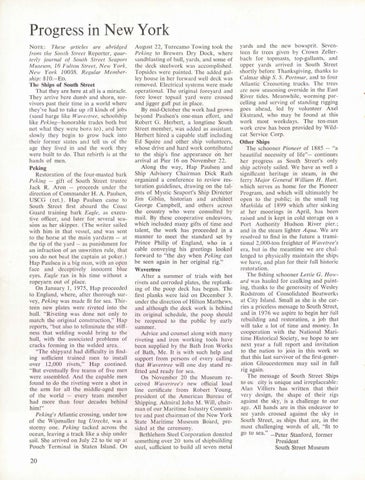 Progress in New York NOTE: These wticles are abridged from the South Street Reporter, quarterly journal of South Street Seaport Mus eum, 16 Fulton Street, N ew York , N ew York 10038. Regular Membership: $10.-ED. The Ships of South Street That they are here at all is a miracle. They arrive here dumb and shorn, survivors past their time in a world where they&#39;ve had to take up Rll kinds of jobs (sand barge like Wav ertree, schoolship like Peking-honorable trades both but not what they were born to), and here slowly they begin to grow back into their former states and tell us of the age they lived in and the work they were built to do. That rebirth is at the hands of men. Peking Restoration of the four-masted bark Peking - gift of South Street trustee Jack R. Aron - proceeds under the direction of Commander H. A. Paulsen, USCG (ret.). Hap Paulsen came to South Street first aboard the Coast Guard training bark Eagle, as executive officer, and later for several seasons as her skipper. (The writer sailed with him in that vessel, and was sent to the horse at the main yardarm - at the tip of the yard - as punishment for an infraction of an unwritten rule, that you do not beat the captain at poker.) Hap Paulsen is a big man, with an open face and deceptively innocent blue eyes. Eagle ran in his time without a ropeyarn out of place. On January 1, 1975, Hap proceeded to England, where, after thorough survey, Peking was made fit for sea. Thirteen new plates were riveted into the hull. &quot;Riveting was done not only to match the original construction,&quot; Hap reports, &quot;but also to teliminate the stiffness that welding would bring to the hull, with the associated problems of cracks forming in the welded area. &quot;The shipyard had difficulty in finding sufficient trained men to install over 12,000 rivets,&quot; Hap contined. &quot;But eventually five teams of five men were assembled. And the capable men found to do the riveting were a shot in the arm for all the middle-aged men of the world - every team member had more than four decades behind him!&quot; Peking&#39;s Atlantic crossing, under tow of the Wijsmuller tug Utrecht, was a stormy one . Peking tacked across the ocean, leaving a track like a ship under sail. She arrived on July 22 to tie up at Pouch Terminal in Staten Island. On

August 22, Turecamo Towing took the Peking to Brewers Dry Dock, where sandblasting of hull, yards, and some of the deck steelwork was accomplished. Topsides were painted. The added galley house in her forward well deck was removed. Electrical systems were made operational. The _original forey ard and fore lower topsail yard were crossed and jigger gaff put in place. By mid-October the work had grown beyond Paulsen&#39;s one-man effort, and Robert G. Herbert, a longtime South Street member, was added as assistant. Herbert hired a capable staff including Ed Squire and other ship volunteers, whose drive and hard work contributed to the ship&#39;s fine appearance on her arrival at Pier 16 on November 22. Along the way, Hap Paulsen and Ship Advisory Chairman Dick Rath organized a conference to review restoration guidelines, drawing on the talents of Mystic Seaport&#39;s Ship Director Jim Giblin, historian and architect George Campbell, and others across the country who were consulted by mail. By these cooperative endeavors, which included many gifts of time and talent, the work has proceeded in a manner to meet the standard set by Prince Philip of England, who in a cable conveying his greetings looked forward to &quot;the day when Peking can be seen again in her original rig.&quot; Wavertree After a summer of trials with hot rivets and corroded plates, the replanking of the poop deck has begun. The first planks were laid on December 3. under the direction of Hilton Matthews, and although the deck work is behind its original schedule, the poop should be reopened to the public by early summer. Advice and counsel along with many riveting and iron working tools have been supplied by the Bath Iron Works of Bath, Me . It is with such help and support from persons of every calling that Wavertree will one day stand refitted and ready for sea. On November 20 the Museum received Wavertree&#39;s new official load line certificate from Robert Young, president of the American Bureau of Shipping. Admiral John M . Will , chairman of our Maritime Industry Commitâ&amp;#x20AC;˘ tee and past chairman of the New York State Maritime Museum Board, presided at the ceremony. Bethlehem Steel Corporation donated something over 20 tons of shipbuilding steel, sufficient to build all seven metal

yards and the new bowsprit. Seventeen fir trees given by Crown Zellerbach for topmasts, top-gallants, and upper yards arrived in South Street shortly before Thanksgiving, thanks to Calmar ship S. S. Portmar, and to four Atlantic Creosoting trucks. The trees arc now seasoning overside in the East River tides. Meanwhile, worming parcelling and serving of standing rigging goes ahead, led by volunteer Axel Ekstrand, who may be found at this work most weekdays . The ten-man work crew has been provided by Wildcat Service Corp. Other Ships The schooner Pioneer of 1885 - &quot;a beautiful necessity of life&quot;- continues her progress as South Street&#39;s only ship actively sailed. We have as well a significant heritage in steam, in the ferry Major G eneral William H . Hart , which serves as home for the Pioneer Program, and which will ultimately be open to the public; in the small tug Mathilda of 1899 which after sinking at her moorings in April, has been raised and is kept in cold storage on a Port Authority Hudson River pier.; and in the steam lighter Aqua. We are resolved to find in the future a transitional 2,000-ton freighter of Wavetree&#39;s era, but in the meantime we are challenged to physically maintain the ships we have, and plan for their full historic restoration. The fishing schooner Lettie G. Howard was hauled for caulking and painting, th anks to the generosity of Wesley Rodstrom of Consolidated Boatworks at City Island. Small as she is she carries a priceless message to South Street, and in 1976 we aspire to begin her iull rebuilding and restoration, a job that will take a lot of time and money. In cooperation with the National Maritime Historical Society, we hope to see next year a full report and invitation to the nation to join in this work so that this last survivor of the first-generation Gloucestermen may sail in full rig again. The message of South Street Ships to ou city is unique and irreplaceable : Alan Villiers has written that their very design, the shape of their rigs against the sky, is a challenge to our age. All hands are in this endeavor to see yards crossed against the sky in South Street, as ships that are, in the most challenging words of all, &quot;fit to go to sea.&quot; -Peter Stanford , former President South Street Museum