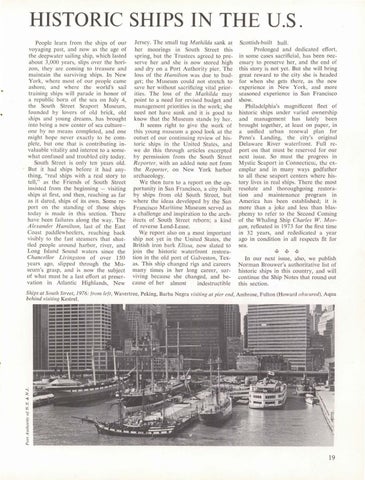 HISTORIC SHIPS IN THE U.S. People learn from the ships of our voyaging past, and now as the age of the deepwater sailing ship, which lasted about 3,000 years, slips over the horizon , they are coming to treasure and maintain the surviving ships. In New York, where most of our people came ashore, and where the world&#39;s sail training ships will parade in honor of a republic born of the sea on July 4, the South Street Seaport Museum , founded by lovers of old brick, old ships and young dreams, has brought into being a new center of sea cultureone by no means completed, and one might hope never exactly to be complete, but one that is contributing invaluable vitality and interest to a somewhat confused and troubled city today. South Street is only ten years old. But it had ships before it had anything, &quot; real ships with a real story to tell,&quot; as the Friends of South Street insisted from the beginning - visiting ships at first, and then, reaching as far as it dared, ships of its own. Some report on the standing of those ships today is made in this section. There have been failures along the way. The Alexander Hamilton, last of the East Coast paddlewheelers, reaching back visibly to the fast steamers that shuttled people around harbor, river, and Long Island Sound waters since the Chancellor Livingston of over 150 years ago, slipped through the Museum&#39;s grasp, and is now the subject of what must be a last effort at preservation in Atlantic Highlands, New

Jersey. The small tug Mathilda sank at her moorings in South Street this spring, but the Trustees agreed to preserve her and she is now stored high and dry on a Port Authority pier. The loss of the Hamilton was due to budget; the Museum could not stretch to save her without sacrificing vital priorities. The loss of the Mathilda may point to a need for revised budget and management priorities in the work; she need not have sunk and it is good to know that the Museum stands by her. It seems right to give the work of this young museum a good look at the outset of our continuing review of historic ships in the United States, and we do this through articles excerpted by permission from the South Street Reporter, with an added note not from the Reporter, on New York harbor archaeology. We then turn to a report on the opportunity in San Francisco, a city built by ships from old South Street, but where the ideas developed by the San Francisco Maritime Museum served as a challenge and inspiration to the architects of South Street reborn; a kind of reverse Lend-Lease. We report also on a most important ship not yet in the United States, the British iron bark Elissa, now slated to join the historic waterfront restoration in the old port of Galveston, Texas. This ship ch anged rigs and careers many times in her long career, surviving because she changed, and because of her almost indestructible

Scottish-built hull. Prolonged and dedicated effort, in some cases sacrificial, has been necessary to preserve her, and the end of this story is not yet. But she will bring great reward to the city she is headed for when she gets there, as the new experience in New York, and more seasoned experience in San Francisco show. Philadelphia&#39;s magnificent fleet of historic ships under varied ownership and management has lately been brought together, at least on paper, in a unified urban renewal plan for Penn&#39;s Landing, the city&#39;s original Delaware River waterfront. Full report on that must be reserved for our next issue. So must the progress in Mystic Seaport in Connecticu&lt;, th&lt;! exemplar and in many ways godfather to all these seaport centers where history lives in real ships. There the most resolute and thoroughgoing restoration and maintenance program in America has been established; it is more than a joke and less than blasphemy to refer to the Second Coming of the Whaling Ship Charles W. Morgan, refioated in 1973 for the first time in 32 years, and rededicated a year ago in condition in all respects fit for sea.

In our next issue, also, we publish Norman Brouwer&#39;s authoritative list of historic ships in this country, and will continue the Ship Notes that round out this section .