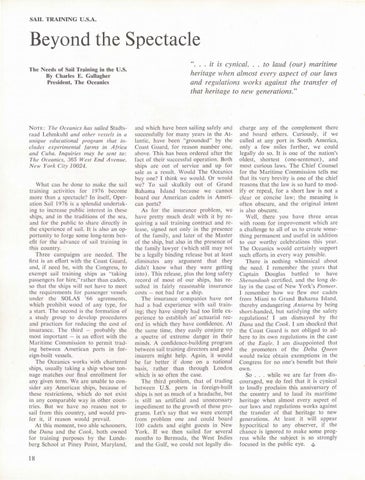 Beyond the Spectacle The Needs of Sail Training in the U.S. By Charles E. Gallagher President, The Oceanics

NOTE: The Oceanics has sailed Stadtsraad Lehmkuhl and other vessels in a unique educational program that includes experimental farms in Africa and Cuba. Inquiries may be sent to: The Oceanics, 365 West End A venue, New York City 10024. What can be done to make the sail training activities for l 976 become more than a spectacle? In itself, Operation Sail l 976 is a splendid undertaking to increase public interest in these ships, and in the traditions of the sea, and for the public to share directly in the experience of sail. lt is also an opportunity to forge some long-term benefit for the advance of sail training in this country. Three campaigns are needed. The first is an effort with the Coast Guard, and, if need be, with the Congress, to exempt sail training ships as &quot;taking passengers for hire,&quot; rather than cadets, so that the ships will not have to meet the requirements for passenger vessels under the SOLAS &#39;66 agreements, which prohibit wood of any type, for a start. The second is the formation of a study group to develop procedures and practices for reducing the cost of insurance. The third - probably the most important - is an effort with the Maritime Commission to permit trading between American ports in foreign-built vessels. The Oceanics works with chartered ships, usu ally taking a ship whose tonnage matches our fin al enrollment for any given term. We are unable to consider any American ships, because of these restrictions, which do not exist in any comparable way in other countries. But we have no reason not to sail from this country, and would prefer it, if reason would prevail. At this moment, two able schooners, the Dana and the Cook, both owned for training purposes by the Lundeberg School at Piney Point, Maryland,

&quot; it is cynical. . . to laud (our) mantzme heritage when almost every aspect of our laws and regulations works against the transfer of that heritage to new generations.&quot;

and which have been sailing safely and successfully for many years in the Atlantic, have been &quot;grounded&quot; by the Coast Guard, for reason number one, above. This has been ordered after the fact of their successful operation. Both ships are out of service and up for sale as a result. Would The Oceanics buy one? I think we would. Or would we? To sail skulkily out of Grand Bahama Island because we cannot board our American cadets in American ports? As for the insurance problem, we have pretty much dealt with it by requiring a sail trai ning contract and release, signed not only in the presence of the family, and later of the Master of the ship, but also in the presence of the fa mily lawyer (which still may not be a legally binding release but at least eliminates any argument that they didn&#39;t know what they were getting into). This release, pl us the long safety record of most of our ships, has resulted in fairly reasonable insurance costs - not bad for a ship. The insurance companies have not had a bad experience with sail training; they have simply had too little experience to establish anÂˇ actuarial record in which they have confidence. At the same time, they easily conjure up a spectre of extreme danger in their minds. A confidence-building program between sail training directors and good insurers might help. Again, it would be far better if done on a national basis, rather than through London which is so often the case. The third problem, that of trading between U.S. ports in foreign-built ships is not as much of a headache, but is still an artificial and unnecessary impediment to the growth of these programs. Let&#39;s say that we were exempt from problem one and could board 100 cadets and eight guests in New York. If we then sailed for several months to Bermuda, the West Indies and the Gulf, we could not legally dis-

charge any of the complement there and board others. Curiously, if we called at any port in South America, only a few miles further, we could legally do so. It is one of the nation&#39;s oldest, shortest (one-sentence), and most curious laws. The Chief Counsel for the Maritime Commission tells me that its very brevity is one of the chief reasons that the law is so hard to modify or repeal, for a short law is not a clear or concise law; the meaning is often obscure, and the original intent is also obscure. Well, there you have three areas with room for improvement which are a challenge to all of us to create something permanent and useful in addition to our worthy celebrations this year. The Oceanics would certainly support such efforts in every way possible. There is nothing whimsical about the need. I remember the years that Captain Douglas battled to have Shenandoah certified, and the long delay in the case of New York&#39;s Pioneer. I remember how we flew our cadets from Miani to Grand Bahama Island, thereby endangering Antarna by being short-handed, but satisfying the safety regulations! I am dismayed by the Dana and the Cook. I am shocked that the Coast Guard is not obliged to adhere to its own regulations in the case of the Eagle. I am disappointed that the promoters of the Delta Queen would twice obtain exemptions in the Congress for no one&#39;s benefit but their own. So . . . while we are far from discouraged, we do feel that it is cynical to loudly proclaim this anniversary of the country and to laud its maritime heritage when almost every aspect of our laws and regulations works against the transfer of that heritage to new generations. At least it will appear hypocritical to any observer, if the chance is ignored to make some progress while the subject is so strongly focused in the public eye. .i,