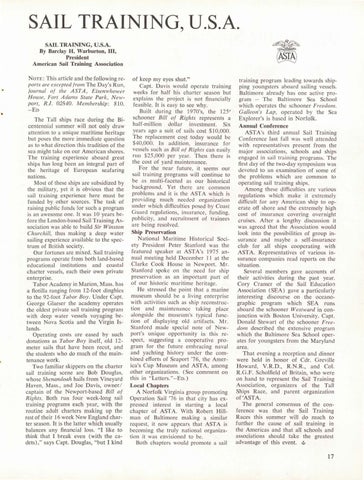 SAIL TRAINING, U.S.A. SAIL TRAINING, U.S.A. By Barclay H. Warburton, III, President American Sail Training Association Norn : This article and the following reports are excepted from The Day&#39;s Run, journal of the ASTA, Eisenwhower House, Fort Adams State Park, Newport, R.l. 02840. Membership: $10. -ED The Tall ships race during the Bicentennial summer will not only draw attention to a unique maritime heritage but poses the more immediate question as to what direction this tradition of the sea might take on our American shores. The training experience aboard great ships has long been an integral part of the heritage of European seafaring nations. Most of these ships are subsidized by the military, yet it is obvious that the sail training experience here must be funded by other sources. The task of raising public funds for such a program is an awesome one. It was 10 years before the London-based Sail Training Association was able to build Sir Winston Churchill, thus making a deep water sailing experience available to the spectrum of British society. Our fortunes are mixed. Sail training programs operate from both land-based educational institutions and coastal charter vessels, each their own private enterprise. Tabor Academy in Marion, Mass. has a flotilla ranging from 12-foot dinghies to the 92-foot Tabor Boy. Under Capt. George Glaeser the academy operates the oldest private sail training program with deep water vessels voyaging between Nova Scotia and the Virgin Islands. Operating costs are eased by such donations as Tabor Boy itself, old 12meter sails that have been recut, and the students who do much of the maintenance work. Two familiar skippers on the charter sail training scene are Bob Douglas, whose Shenandoah hails from Vineyard Haven, Mass., and Joe Davis, owner/ captain of the Newport-based Bill of Rights. Both run four week-long sail training programs each year, with the routine adult charters making up the rest of their 16 week New England charter season. It is the latter which usually balances any financial Joss. &quot;I like to think that I break even (with the cadets),&quot; says Capt. Douglas, &quot;but I kind

of keep my eyes shut.&quot; Capt. Davis would operate training weeks for half his charter season but explains the project is not financially feasible. It is easy to see why. Built during the 1970&#39;s, the I 25&#39; schooner Bill of Rights represents a half-million dollar investment. Six years ago a suit of sails cost $10,000. The replacement co~t today would be $40,000. l n addition, insurance for vessels such as Bill of Rights can easily run $25,000 per year. Then there is the cost of yard maintenance. For the near future , it seems our sail training programs will continue to be as multi-faceted as our historical backgrouncj. Yet there are common problems and it is the AST A which is providing much needed organization under which difficulties posed by Coast Guard regulations, insurance, funding , publicity, and recruitment of trainees are being resolved. Ship Preservation National Maritime Historical Society President Peter Stanford was the featured speaker at ASTA&#39;s 1975 annual meeting held December 11 at the Clarke Cook House in Newport. Mr. Stanford spoke on the need for ship preservation as an important part of of our historic maritime heritage. He stressed the point that a marine museum should be a living enterprise with activities such as ship reconstruction and maintenance taking place alongside the museum&#39;s typical function of displaying old artifacts. Mr. Stanford made special note of Newport&#39;s unique opportunity in this respect, suggesti ng a cooperative program for the future embracing naval and yachting history under the combined efforts of Seaport &#39;76, the America&#39;s Cup Museum and ASTA, among other organizations. (See comment on this in &quot;Letters.&quot;-Eo.) Local Chapters A Norfolk Virginia group promoting Operation Sail &#39;76 in that city has expressed interest in starting a local chapter of AST A. With Robert Hillman of Baltimore making a similar request, it now appears that ASTA is becoming the truly national organization it was envisioned to be. Both chapters would promote a sail

training program leading towards shipping youngsters aboard sailing vessels. Baltimore already has one active program - The Baltimore Sea School which operates the schooner Freedom. Galleon&#39;s Lap, operated by the Sea Explorer&#39;s is based in Norfolk. Annual Conference ASTA&#39;s .third annua l Sail Training Conference last fall was well attended with representatives present from the major associations, schools and ships engaged in sail training programs. The first day of the two-day symposium was devoted to an examination of some of the problems which are common to operating sail training ships. Among these difficulties are various regulations which make it extremely difficult for any American ship to operate off shore and the extremely high cost of insurance covering overnight cruises. After a lengthy discussion it was agreed that the Association would look into the possibilities of group insurance and maybe a self-insurance club for all ships cooperating with ASTA. Representatives of various insurance companies read reports on the situation. Several members gave accounts of their activities during the past year. Cory Cramer of the Sail Education Association (SEA) gave a particularly interesting discourse on the oceanographic program which SEA runs aboard the schooner Westward in conjunction with Boston University. Capt. Donald Stewart of the schooner Freedom described the extensive program which the Baltimore Sea School operates for youngsters from the Maryland area. That evening a reception and dinner were held in honor of Cdr. Greville Howard, V.R.D., R.N.R., and Col. R.G.F. Scholfield of Britain, who were on hand to represent the Sail Training Association, organizers of the Tall Ships Race, and parent organization of ASTA. The general consensus of the conference was that the Sail Training Races this summer will do much to further the cause of sail training in the Americas and that all schools and associations should take the greatest advantage of this event. .t 0