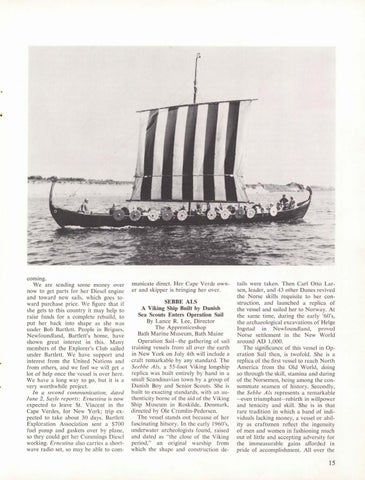 coming. We are sending some money over now to get parts for her Diesel engine and toward new sails, which goes to ward purchase price. We figure that if she gets to this country it may help to raise funds for a complete rebuild , to put her back into shape as she was under Bob Bartlett. People in Brigues, Newfoundland, Bartlett's home, have shown great interest in this. Many members of the Explorer's Club sailed under Bartlett. We have support and interest from the United Nations and from others, and we feel we will get a lot of help once the vessel is over here. We have a Jong way to go, but it is a very worthwhile project. Jn a second communication, dated June 2, Sayle reports: Ernestina is now expected to leave St. Vincent in the Cape Verdes, for New York; trip expected to take about 30 days. Bartlett Exploration Association sent a $700 fuel pump and gaskets over by plane, so they could get her Cummings Diesel working. Ernestina also carries a shortwave radio set, so may be able to com-

municate direct. Her Cape Verde owner and skipper is bringing her over.

SEBBE ALS A Viking Ship Built by Danish Sea Scouts Enters Operation Sail By Lance R. Lee, Director The Apprenticeshop Bath Marine Museum, Bath Maine Operation Sail-the gathering of sail training vessels from all over the earth in New York on July 4th will include a craft remarkable by any standard. The Seebbe Ats, a 55-foot Viking longship replica was built entirely by hand in a small Scandinavian town by a group of Danish Boy and Senior Scouts. She is built to exacting standards, with an authenticity borne of the aid of the Viking Ship Museum in Roskilde, Denmark, directed by Ole Crumlin-Pedersen. The vessel stands out because of her fascinating hitsory. In the early I 960's, underwater archeologists found, raised and dated as "the close of the Viking period," an original warship from which the shape and construction de-

tails were taken. Then Carl Otto Larsen, leader, and 43 other Danes revived the Norse skills requisite to her construction, and launched a replica of the vessel and sailed her to Norway. At the same time, during the early '60's, the archaeological excavations of Helge lngstad in Newfoundland, proved Norse settlement in the New World around AD 1,000. The significance of this vessel in Operation Sail then, is twofold. She is a replica of the first vessel to reach North America from the Old World, doing so through the skill, stamina and daring of the Norsemen, being among the consummate seamen of history. Secondly, the Sebbe Als represents a remarkable -even triumphant-rebirth in willpower and tenacity and skill. She is in that rare tradition in which a band of individuals lacking money, a vessel or ability as craftsmen reflect the ingenuity of men and women in fashioning much out of little and accepting adversity for the immeasurable gains afforded in pride of accomplishment. All over the