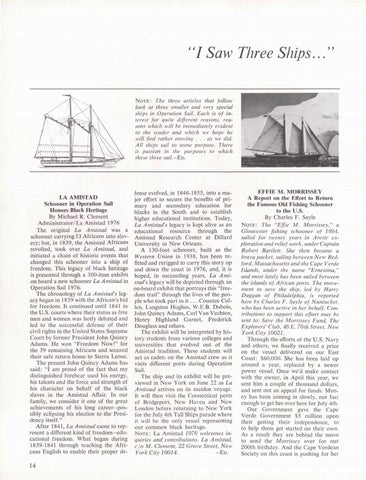 &#39;&#39;I Saw Three Ships ... &#39;&#39; NoTE: The three articles that follow look at three smaller and very special ships in Operation Sail. Each is of interest for quite different reasons, reasons which will be immediately evident to the reader and which we hope he will find rather moving ... as we did. A II ships sail to some purpose. There is passion in the purposes to which these three sail.-ED.

fense evolved, in 1846-1855, into a maLAAMISTAD jor effort to secure the benefits of priSchooner in Operation Sail mary and secondary education for Honors Black Heritage blacks in the South and to establish By Michael R. Clement higher educational institutions. Today, Administrator/La Amistad 1976 La Amistad&#39;s legacy is kept alive as an The original La Amistad was a educational resource through the schooner carrying 53 Africans into slav- Amistad Research Center at Dillard ery; but, in 1839, the Amistad Africans University in New Orleans. revolted, took over La Amistad, and A 130-foot schooner, built as the initiated a chain of historic events that Western Union in 1938, has been rechanged this schooner into a ship of fitted and rerigged to carry this story up freedom. This legacy of black heritage and down the coast in 1976, and, it is is presented through a 300-item exhibit hoped, in succeeding years. La Amion board a new schooner La Amistad in stad&#39;s legacy will be depicted through an Operation Sail 1976. on-board exhibit that portrays this &quot;freeThe chronology of La Amistad&#39;s leg- dom trail&quot; through the lives of the peoacy began in 1839 with the African&#39;s bid ple who took part in it ... Countee Culfor freedom. It continued until 1841 in len, Langston Hughes, W.E.B. Dubois, the U.S. courts where their status as free John Quincy Adams, Carl Van Vechten, men and women was hotly debated and Henry Highland Garnet, Frederick Jed to the successful defense of their Douglass and others. civil rights in the United States Supreme The exhibit will be interpreted by hisCourt by former President John Quincy tory students from various colleges and Adams. He won &quot;Freedom Now!&quot; for universities that evolved out of the the 39 remaining Africans and secured Amistad tradition. These students will their safe return home to Sierra Leone. act as cadets on the Amistad crew as it The present John Quincy Adams has visits different ports during Operation said: &quot;I am proud of the fact that my Sail. distinguished forebear used his energy, The ship and its exhibit will be prehis talents and the force and strength of viewed in New York on June 22 as La his character on behalf of the black Amistad arrives on its maiden voyage. slaves in the Amistad Affair. In our It will then visit the Connecticut ports family, we consider it one of the great of Bridgeport, New Haven and New achievements of his long career-pos- London before returning to New York sibly eclipsing his election to the Presi- for the July 4th Tall Ships parade where dency itself.&quot; it will be the only vessel representing After 1841, La Amistad came to rep- our common black heritage. resent a different kind of freedom-edu- NOTE: La Amistad 1976 welcomes incational freedom. What began during quiries and contributions. La Amistad, 1839-1841 through teaching the Afri- c/o M. Clement, 22 Grove Street, New cans English to enable their proper de- York City 10014. -ED.

EFFIE M. MORRISSEY A Report on the Effort to Return the Famous Old Fishing Schooner to the U.S. By Charles F. Sayle NOTE: The &quot;Effie M. Morrissey,&quot; a Gloucester fishing schooner of 1894, sailed for twenty years in A retie exploration and relief work, under Captain Robert Bartlett. She then became a brava packet, sailing between New Bedford, Massachusetts and the Cape Verde Islands, under the name &quot;Ernestina,&quot; and most lately has been sailed between the islands of African ports. The movement to save the ship, led by Harry Duggan of Philadelphia, is reported here by Charles F. Sayle of Nantucket , who has been active in her behalf. Contributions to support this effort may be sent to: Save the Morrissey Fund, The Explorers&#39; Club, 46 E. 70th Street, New York City 10021 . Through the efforts of the U.S. Navy and others, we finally received a price on the vessel delivered on our East Coast: $60,000. She has been laid up around a year, replaced by a newer power vessel. Once we&#39;d make contact with the owner, in April this year, we sent him a couple of thousand dollars, and sent out an appeal for funds. Money has been coming in slowly, not fast enough to get her over here for July 4th. Our Government gave the Cape Verde Government $5 million upon their getting their independence, to to help them get started on their own. As a result they are behind the move to send the Morrissey over for our 200th birthday. And the Cape Verdean Society on this coast is pushing for her