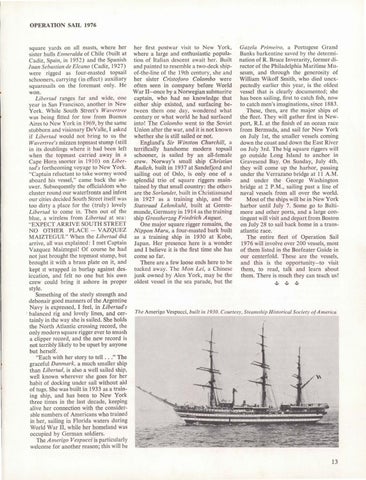 square yards on all masts, where her her first postwar visit to New York, Gaze/a Primeiro, a Portugese Grand sister hulls Esmeralda of Chile (built at where a large and enthusiastic popula- Banks barkentine saved by the determiCadiz, Spain, in 1952) and the Spanish tion of Italian descent await her. Built nation of R. Bruce Inverarity, former diJuan Sebastian de Elcano (Cadiz, 1927) and painted to resemble a two-deck ship- rector of the Philadelphia Maritime Muwere rigged as four-masted topsail of-the-line of the 19th century, she and seum, and through the generosity of schooners, carrying (in effect) auxiliary her sister Cristofaro Colombo were William Wikoff Smith, who died unexsquaresails on the foremast only. He often seen in company before World pectedly earlier this year, is the oldest War II-once by a Norwegian submarine vessel that is clearly documented; she won. Libertad ranges far and wide, one captain, who had no knowledge that has been sailing, first to catch fish, now year in San Francisco, another in New either ship existed, and surfacing be- to catch men&#39;s imaginations, since 1883. . These, then, are the major ships of York. While South Street&#39;s Wavertree tween them one day, wondered what wasÂˇ being fitted for tow from Buenos century or what world he had surfaced the fleet. They will gather first in NewAires to New York in 1969, by the same into! The Colombo went to the Soviet port, R.I. at the finish of an ocean race stubborn and visionary De Valle, I asked Union after the war, and it is not known from Bermuda, and sail for New York if Libertad would not bring to us the whether she is still sailed or not. on July 1st, the smaller vessels coming Wavertree&#39;s mizzen topmast stump (still England&#39;s Sir Winston Churchill, a down the coast and down the East River in its doublings where it had been left terrifically handsome modern topsail on July 3rd. The big square riggers will when the topmast carried away in a schooner, is sailed by an all-female go outside Long Island to anchor in Cape Horn snorter in 1910) on Liber- crew. Norway&#39;s small ship Christian Gravesend Bay. On Sunday, July 4th, tad&#39;s forthcoming voyage to New York . Radich, built in 1937 at Sandefjord and they will come up the harbor, passing &quot;Captain reluctant to take wormy wood sailing out of Oslo, is only one of a under the Verrazano bridge at 11 A.M. aboard his vessel,&quot; came back the an- splendid trio of square riggers main- and under the George Washington swer. Subsequently the officialdom who tained by that small country: the others bridge at 2 P.M., sailing past a line of cluster round our waterfronts and infest are the Sorlandet, built in Ch;Âˇistiansand naval vessels from all over the world. our cities decided South Street itself was in 1927 as a training ship, and the Most of the ships will be in New York too dirty a place for the (truly) lovely Statsraad Lehmkuhl, built at Geeste- harbor until July 7. Some go to BaltiLibertad to come in. Then out of the munde, Germany in 1914 as the training more and other ports, and a large conblue, a wireless from Libertad at sea: ship Grossherzag Friedrich August. tingent will visit and depart from Boston &quot;EXPECT ARRIVE SOUTH STREET One major square rigger remains, the on July 28 to sail back home in a transNO OTHER PLACE - VAZQUEZ Nippon Maru, a four-masted bark built atlantic race. MAIZTEGUI.&quot; When the Libertad did as a training ship in 1930 at Kobe, The entire fleet of Operation Sail arrive, all was explained: I met Captain Japan. Her presence here is a wonder 1976 will involve over 200 vessels, most Vazquez Maiztegui! Of course he had and I believe it is the first time she has of them listed in the Beefeater Guide in not just brought the topmast stump, but come so far. our centerfold. These are the vessels, brought it with a brass plate on it, and There are a few loose ends here to be and this is the opportunity-to visit kept 1t wrapped in burlap against des- tucked away. The Mon Lei, a Chinese them, to read, talk and learn about them. There is much they can teach us! iccation, and felt no one but his own junk owned by Alen York, may be the crew could bring it ashore in proper oldest vessel in the sea parade, but the .to .to .t. style. Something of the steely strength and debonair good manners of the Argentine Navy is expressed, I feel, in Libertad&#39;s &#39; balanced rig and lovely lines, and cer- The Amerigo Vespucci, built in 1930. Courtesy, Steamship Historical Society of America tainly in the way she is sailed. She holds the North Atlantic crossing record, the only modern square rigger ever to smash a clipper record, and the new record is not terribly likely to be upset by anyone but herself. &quot;Each with her story to tell ... &quot;The graceful Danmark, a much smaller ship than Libertad, is also a well sailed ship, well known wherever she goes for her habit of docking under sail without aid of tugs. She was built in 1933 as a training ship, and has been to New York three times in the last decade, keeping alive her connection with the considerable numbers of Americans who trained in her, sailing in Florida waters during World War II, while her homeland was occupied by German soldiers. The Amerigo Vespucci is particularly welcome for another reason; this will be