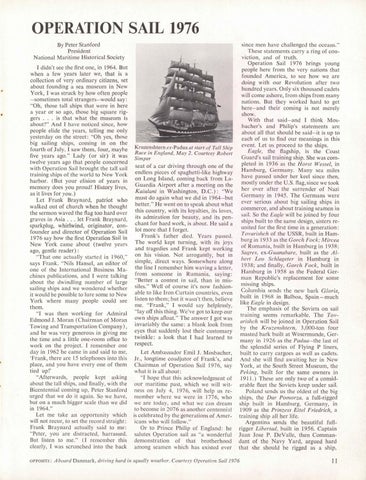 OPERATION SAIL 1976 By Peter Stanford President National Maritime Historical Society I didn't see the first one, in 1964. But when a few years later we, that is a collection of very ordinary citizens, set about founding a sea museum in New York, I was struck by how often people -sometimes total strangers-would say: "Oh, those tall ships that were in here a year or so ago, those big square riggers . . . is that what the museum is about?" And I have noticed since, how people elide the years, telling me only yesterday on the street: "Oh yes, those big sailing ships, coming in on the fourth of July. I saw them, four, maybe five years ago." Lady (or sir) it was twelve years ago that people concerned with Operation Sail brought the tall sail training ships of the world to New York harbor. (But your elision of years in memory does you proud! History lives, as it lives for you.) Let Frank Braynard, patriot who walked out of church when he thought the sermon waved the flag too hard over graves in Asia ... let Frank Braynard, sparkplug, whirlwind, originator, confounder and director of Operation Sail 1976 say how the first Operation Sail in New York came about (twelve years ago, gentle reader) : 'That one actually started in 1960," says Frank. "Nils Hansel, an editor of one of the International Business Machines publications, and I were talking about the dwindling number of large sailing ships and we wondered whether it would be possible to lure some to New York where many people could see them. "I was then working for Admiral Edmond J. Moran (Chairman of Moran Towing and Transportation Company), and he was very generous in giving me the time and a little one-room office to work on the project. I remember one day in 1962 he came in and said to me, 'Frank, there are 15 telephones into this place, and you have every one of them tied up!' "Afterwards, people kept asking about the tall ships, and finally, with the Bicentennial coming up, Peter Stanford urged that we do it again. So we have, but on a much bigger scale than we did in 1964." Let me take an opportunity which will not recur, to set the record straight: Frank Braynard actually said to me: "Peter, you are distracted, harrassed. But listen to me." (I remember this clearly, I was scrunched into the back OPPOSITE :

Kruzenshtern ex-Padua at start of Tall Ship Race in England, May 2. Courtesy Robert Simper seat of a car driving through one of the endless pieces of spaghetti-like highway on Long Island, coming back from LaGuardia Airport after a meeting on the Kaiulani in Washington, D.C.): "We must do again what we did in 1964-but better." He went on to speak about what this country, with its loyalties, its loves, its admiration for beauty, and its penchant for hard work, is about. He said a lot more that I forget. Frank's father died. Years passed. The world kept turning, with its joys and tragedies and Frank kept working on his vision. Not arrogantly, but in simple, direct ways. Somewhere along the line I remember him waving a letter, from someone in Rumania, saying: "Better a contest in sail, than in missiles." Well of course it's now fashionable to like Iron Curtain countries, even listen to them; but it wasn't then, believe me. "Frank," I would say helplessly, "lay off this thing. We've got to keep our own ships afloat." The answer I got was invariably the same: a blank look from eyes that suddenly lost their customary twinkle: a look that I had learned to respect. Let Ambassador Emil J. Mosbacher, Jr., longtime coadjutor of Frank's, and Chairman of Operation Sail 1976, say what it is all about: "I hope that this acknowledgment of our maritime past, which we will witness on July 4, 1976, will help us remember where we were in 1776, who we are today, and what we can dream to become in 2076 as another centennial is celebrated by the generations of Americans who will follow." Or to Prince Philip of England: he salutes Operation sail as "a wonderful demonstration of that brotherhood among seamen which has existed ever

since men have challenged the oceans." These statements carry a ring of conviction, and of truth. Operation Sail 1976 brings young people here from the very nations that founded America, to see how we are doing with our Revolution after two hundred years. Only six thousand cadets will come ashore, from ships from many nations. But they worked hard to get here-and their coming is not merely show. With that said-and I think Mosbacher's and Philip's statements are about all that should be said-it is up to each of us to find our meanings in this event. Let us proceed to the ships. Eagle, the flagship, is the Coast Guard's sail training ship. She was completed in 1936 as the Horst Wessel, in Hamburg, Germany. Many sea miles have passed under her keel since then, mostly under the U.S. flag, since we took her over after the surrender of Nazi Germany in 1945. The Germans were ever serious about big sailing ships in commerce, and about training seamen in sail. So the Eagle will be joined by four ships built to the same design, sisters reunited for the first time in a generation: Tovarishch of the USSR, built in Hamburg in 1933 as the Gorch Fack; Mircea of Rumania, built in Hamburg in 1938; Sagres, ex-Guanabare, built as the Albert Leo Schlageter in Hamburg in 1938; and finally, Gorch Fack, built in Hamburg in '1953 as the Federal German Republic's replacement for some missing ships. Columbia sends the new bark Gloria, built in 1968 in Balboa, Spain-much like Eagle in design. The emphasis of the Soviets on sail training seems remarkable. The Tovarishch will be joined in Operation Sail by the Kruzenshtern, 3,000-ton four masted bark built at Wesermunde, Germany in 1926 as the Padua-the last of the splendid series of Flying P liners, built to carry cargoes as well as cadets. And she will find awaiting her in New York, at the South Street Museum, the Peking, built for the same owners in 1911.) These are only two of a considerable fleet the Soviets keep under sail. Poland sends us the oldest of the big ships, the Dar Pomorza, a full-rigged ship built in Hamburg, Germany, in 1909 as the Prinzess Eitel Friedrich, a training ship all her life. Argentina sends the beautiful fullrigger Libertad, built in 1956. Captain Juan Jose P. DeValle, then Commandant of the Navy Yard, argued hard that she should be rigged as a ship,