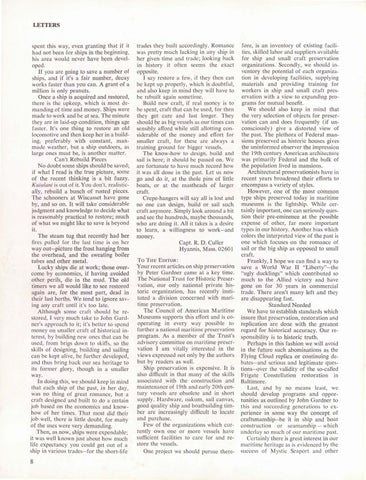 LETIERS spent this way, even granting that if it had not been for ships in the beginning, his area would never have been developed. If you are going to save a number of ships, and if it&#39;s a fair number, decay works faster than you can. A grant of a million is only peanuts. Once a ship is acquired and restored, there is the upkeep, which is most demanding of time and money. Ships were made to work and be at sea. The minute they are in laid-up condition, things age faster. It&#39;s one thing to restore an old locomotive and then keep her in a building, preferably with constant, manmade weather, but a ship outdoors, as large ones must be, is another matter. Can&#39;t Rebuild Pieces No doubt some ships should be saved; if what I read is the true picture, some of the recent thinking is a bit fuzzy. Kaiulani is out of it. You don&#39;t, realistically, rebuild a bunch of rusted pieces. The schooners at Wiscasset have gone by, and so on. It will take considerable judgment and knowledge to decide what is reasonably practical to restore; much of what we might like to save is beyond it. The steam tug that recently had her fires pulled for the last time is on her way out-picture the frost hanging from the overhead, and the sweating boiler tubes and other metal. Lucky ships die at work; those overcome by economics, if having avoided other perils, die in the mud. The old timers we all would like to see restored again are, for the most part, dead in their last berths. We tend to ignore saving any craft until it&#39;s too late. Although some craft should be restored, I very much take to John Gardner&#39;s approach to it; it&#39;s better to spend money on smaller craft of historical interest, by building new ones that can be used, from brigs down to skiffs, so the skills of designing, building and sailing can be kept alive, be further developed, and thus bring back our sea heritage to its former glory, though in a smaller way. In doing this, we should keep in mind that each ship of the past, in her day, was no thing of great romance, but a craft designed and built to do a certain job based on the economics and knowhow of her times. That most did their job well, there is little doubt, for many of the uses were very demanding. Then, as now, ships were expendable; it was well known just about how much life expectancy you could get out of a ship in various trades-for the short-life

trades they built accordingly. Romance was pretty much lacking in any ship in her given time and trade; looking back in history it often seems the exact opposite. I say restore a few, if they then can be kept up properly, which is doubtful, and also keep in mind they will have to be rebuilt again sometime. Build new craft, if real money is to be spent, craft that can be used, for then they get care and last longer. They should be as big vessels as our times can sensibly afford while still allotting considerable of the money and effort for smaller craft, for these are always a training ground for bigger vessels. The know-how to design, build and sail is here; it should be passed on. We are fortunate to have much record how it was all done in the past. Let us now go and do it, at the thole pins of little boats, or at the mastheads of larger craft. Crepe-hangers will say all is Jost and no one can design, build or sail such craft anymore. Simply look around a bit and see the hundreds, maybe thousands, who are doing it. All it takes is a desire to learn, a willingness to work-and money. Capt. R. D. Culler Hyannis, Mass. 02601 To THE EonoR: Your recent articles on ship preservation by Peter Gardner came at a key time. The National Trust for Historic Preservation, our only national private historic organization, has recently instituted a division concerned with maritime preservation. The Council of American Maritime Museums supports this effort and is cooperating in every way possible to further a national maritime preservation program. As a member of the Trust&#39;s advisory committee on maritime preservation I am vitally interested in the views expressed not only by the authors but by readers as well. Ship preservation is expensive. It is also difficult in that many of the skills associated with the construction and maintenance of 19th and early 20th century vessels are obsolete and in short supply. Hardware, oakum, sail canvas, good quality ship and boatbuilding timber are increasing! y difficult to locate and purchase. Few of the organizations which currently own one or more vessels have sufficient facilities to care for and restore the vessels. One project we should pursue there-

fore, is an inventory of existing facilities, skilled labor and suppliers available for ship and small craft preservation organizations. Secondly, we should inventory the potential of each organization in developing facilities, supplying materials and providing training for workers in ship and small craft preservation with a view to expanding programs for mutual benefit. We should also keep in mind that the very selection of objects for preservation can and does frequently (if unconsciously) give a distorted view of the past. The plethora of Federal mansions preserved as historic houses gives the uninformed observer the impression the 19th century American architecture was primarily Federal and the bulk of the population lived in mansions. Architectural preservationists have in recent years broadened their efforts to encompass a variety of styles. However, one of the most common type ships preserved today in maritime museums is the lightship. While certainly important, one can seriously question their pre-eminence at the possible expense of other, far more important types in our history. Another bias which colors the interpreted view of the past is one which focuses on the romance of sail or the big ship as opposed to small craft. Frankly, I hope we can find a way to save a World War II &quot;Liberty&quot;-the &quot;ugly ducklings&quot; which contributed so much to the Allied victory and have gone on for 30 years in commercial trade. There aren&#39;t many left and they are disappearing fast. Standard Needed We have to establish standards which insure that preservation, restoration and replication are done with the greatest regard for historical accuracy. Our responsibility is to historic truth. Perhaps in this fashion we will avoid in the future such abominations as the Flying Cloud replica or continuing debates- and serious and legitimate questions-over the validity of the so-called Frigate Constellation restoration in Baltimore. Last, and by no means least, we should develop programs and opportunities as outlined by John Gardner to this and succeeding generations to experience in some way the concept of craftsmanship-be it in ship and boat construction or seamanship - which underlay so much of our maritime past. Certainly there is great interest in our maritime heritage as is evidenced by the success of Mystic Seaport and other