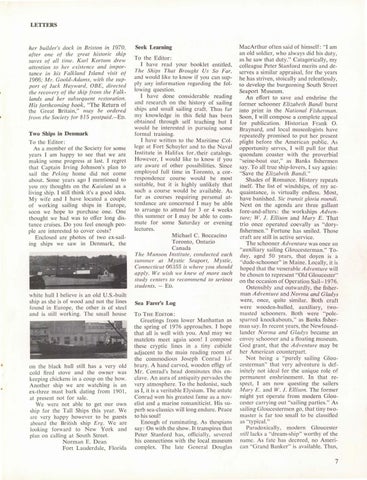 her builder&#39;s clock in Briston in 1970, after one of the great historic ship saves of all time. Karl Kortum drew attentio11 to her existence and importance in his Falkland Island visit of 1966; Mr. Goold-Adams, with the support of Jack Hayward, OBE, directed the recovery of the ship from the Falklands and her subsequent restoration. His forthcoming book, &quot;The Return of the Great Britain,&quot; may be ordered from the Society for $15 postpaid.-ED.

Two Ships in Denmark To the Editor: As a member of the Society for some years I am happy to see that we are making some progress at last. I regret that Captain Irving Johnson&#39;s plan to sail the Peking home did not come about. Some years ago I mentioned to you my thoughts on the Kaiulani as a living ship. I still think it&#39;s a good idea. My wife and I have located a couple of working sailing ships in Europe, soon we hope to purchase one. One thought we had was to offer long distance cruises. Do you feel enough people are interested to cover costs? Enclosed are photos of two ex-sailing ships we saw in Denmark, the

white hull I believe is an old U.S.-built ship as she is of wood and not the lines found in Europe, the other is of steel and is still working. The small house

on the black hull still has a very old cold fired stove and the owner was keeping chickens in a coup on the bow. Another ship we are watching is an ex-three mast bark dating from 1901, at present not for sale. We were not able to get our own ship for the Tall Ships this year. We are very happy however to be guests aboard the British ship Erg. We are looking forward to New York and plan on calling at South Street. Norman E. Dean Fort Lauderdale, Florida

Seek Learning To the Editor: I have read your booklet entitled, The Ships That Brought Us So Far, and would like to know if you can supply a ny information regarding the following question. I have done considerable reading and research on the history of sailing ships and small sailing craft. Thus far my knowledge in this field has been obtained through self teaching but I would be interested in pursuing some formal training. I have written to the Maritime College at Fort Schuyler and to the Naval Institute in Halifax for, their catalogs. However, I would like to know if you are aware of other possibilities. Since employed full time in Toronto, a correspondence course would be most suitable, but it is highly unlikely that such a course would be avai lable. As far as courses requiring personal attendance are concerned I may be able to arrange to attend for 3 or 4 weeks this summer or I may be able to commute for some Saturday or evening lectures. Michael C. Boccacino Toronto, Ontario Canada The Munson Institute, conducted each summer at Mystic Seaport, Mystic, Connecticut 06355 is where you should apply. We wish we knew of more such study centers to recommend to serious students. - ED.

Sea Farer&#39;s Log To THE EDITOR: Greetings from lower Manhattan as the spring of 1976 approaches. I hope that all is well with you. And rriay we matelots meet again soon! I compose these cryptic lines in a tiny cubicle adjacent to the main reading room of the commodious Joseph Conrad Library. A hand carved, wooden effigy of Mr. Conrad&#39;s head dominates this enclave. An aura of antiquity pervades the very atmosphere. To the hedonist, such as I, it is a veritable Elysium. The astute Conrad won his greatest fame as a novelist and a marine romaniticist. His superb sea-classics will long endure. Peace to his soul! Enough of ruminating. As thespians say: On with the show. It transpires that Peter Stanford has, officially, severed his connections with the local museum complex. The late General Douglas

MacArthur often said of himself: &quot;I am an old soldier, who always did his duty, as he saw that duty.&quot; Catagorically, my colleague Peter Stanford merits and deserves a similar appraisal, for the years he has striven, stoically and relentlessly, to develop the burgeoning South Street Seaport Museum. An effort to save and enshrine the former schooner Elizabeth Bandi burst into print in the National Fisherman. Soon, I will compose a complete appeal for publication. Historian Frank 0. Braynard, and local museologists have repeatedly promised to put her present plight before the American public. As opportunity serves, I will pull for that quondam coaster with the proverbial &quot;seine-boat oar,&quot; as Banks fishermen say. To all true ship-lovers, I say again: &quot;Save the Elizabeth Bandi.&quot; Shades of Romance. History repeats itself. The list of windships, of my acquaintance, is virtually endless. Most, have banished. Sic transit gloria mundi. Next on the agenda are three gallant fore-and-afters: the workships Adventure; W. J. Ellison and Mary E. That trio once operated coevally as &quot;doryfishermen.&quot; Fortune has smiled. Those craft are still in active service. The schooner Adventure was once an &quot;auxiliary sailing Gloucesterman.&quot; Today, aged 50 years, that doyen is a &quot;dude-schooner&quot; in Maine. Locally, it is hoped that the venerable Adventure will be chosen to represent &quot;Old Gloucester&quot; on the occasion of Operation Sail-1976. Ostensibly and outwardly, the fisherman Adventure and Norma and Gladys were, once, quite similar. Both craft were wooden-hulled, auxiliary, twomasted schooners. Both were &quot;polesparred knockabouts,&quot; as Banks fisherman say. In recent years, the Newfoundlander Norma and Gladys became an envoy schooner a nd a floating museum. God grant, that the Adventure may be her American counterpart. Not being a &quot;purely sailing Gloucesterman&quot; that very adventure is definitely not ideal for the unique role of permanent enshrinement. In that respect, I am now questing the sailers Mary E. and W. J. Ellison. The former might yet operate from modern Gloucester carrying out &quot;sailing parties.&quot; As sailing Gloucestermen go, that tiny twomaster is far too small to be classified as &quot;typical.&quot; Paradoxically, modern Gloucester still lacks a &quot;dream-ship&quot; worthy of the name. As fate has decreed, no American &quot;Grand Banker&quot; is available. Thus,