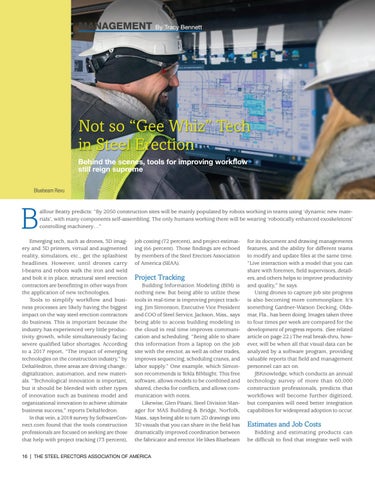 Not so “Gee Whiz” Tech in Steel Erection Behind the scenes, tools for improving workflow still reign supreme Bluebeam Revu

alfour Beatty predicts: “By 2050 construction sites will be mainly populated by robots working in teams using ‘dynamic new materials’, with many components self-assembling. The only humans working there will be wearing ‘robotically enhanced exoskeletons’ controlling machinery…”

Emerging tech, such as drones, 3D imagery and 3D printers, virtual and augmented reality, simulators, etc., get the splashiest headlines. However, until drones carry I-beams and robots walk the iron and weld and bolt it in place, structural steel erection contractors are benefitting in other ways from the application of new technologies. Tools to simplify workflow and business processes are likely having the biggest impact on the way steel erection contractors do business. This is important because the industry has experienced very little productivity growth, while simultaneously facing severe qualified labor shortages. According to a 2017 report, “The impact of emerging technologies on the construction industry,” by DeltaHedron, three areas are driving change.: digitalization, automation, and new materials. “Technological innovation is important, but it should be blended with other types of innovation such as business model and organizational innovation to achieve ultimate business success,” reports DeltaHedron. In that vein, a 2018 survey by SoftwareConnect.com found that the tools construction professionals are focused on seeking are those that help with project tracking (73 percent),

job costing (72 percent), and project estimating (66 percent). Those findings are echoed by members of the Steel Erectors Association of America (SEAA).

Project Tracking Building Information Modeling (BIM) is nothing new. But being able to utilize these tools in real-time is improving project tracking. Jim Simonson, Executive Vice President and COO of Steel Service, Jackson, Miss., says being able to access building modeling in the cloud in real time improves communication and scheduling. “Being able to share this information from a laptop on the job site with the erector, as well as other trades, improves sequencing, scheduling cranes, and labor supply.” One example, which Simonson recommends is Tekla BIMsight. This free software, allows models to be combined and shared, checks for conflicts, and allows communication with notes. Likewise, Glen Pisani, Steel Division Manager for MAS Building &amp; Bridge, Norfolk, Mass., says being able to turn 2D drawings into 3D visuals that you can share in the field has dramatically improved coordination between the fabricator and erector. He likes Bluebeam

16 | THE STEEL ERECTORS ASSOCIATION OF AMERICA

for its document and drawing managements features, and the ability for different teams to modify and update files at the same time. “Live interaction with a model that you can share with foremen, field supervisors, detailers, and others helps to improve productivity and quality,” he says. Using drones to capture job site progress is also becoming more commonplace. It’s something Gardner-Watson Decking, Oldsmar, Fla., has been doing. Images taken three to four times per week are compared for the development of progress reports. (See related article on page 22.) The real break-thru, however, will be when all that visual data can be analyzed by a software program, providing valuable reports that field and management personnel can act on. JBKnowledge, which conducts an annual technology survey of more than 60,000 construction professionals, predicts that workflows will become further digitized, but companies will need better integration capabilities for widespread adoption to occur. 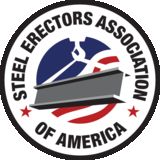