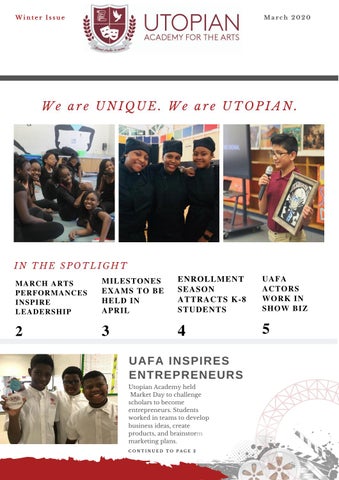 We are UNIQUE. We are UTOPIAN.

IN THE SPOTLIGHT MILESTONES

Teams earned Eagle Bucks for product sales that they could use to buy items from other vendors or add to their bottom lines.

Sixth graders Trinity Pride and Nylah Joye helped to develop Ice Cold Gems, bracelets with beads. "They are very colorful," Pride said. All but one sold at the marketplace. "We learned that sometimes you have to modify your product to make it better."

The team learned that starting a business can be challenging. "Sometimes, we argued about the designs, but the next day we would be laughing about it," Turner said. "We really got along well."

Fine arts teachers are planning special performances that will allow students to share their talents.

theater students to showcase themselves," Calvin said. "We want them to get up there and be amazing."

On March 20, UAFA will host its first Literary and Monologue Competition at 6 p.m. at the campus in Ellenwood. The new show is being developed by Angelic Calvin, office manager at UAFA and her daughter, UAFA's inaugural valedictorian Sydney Oshuna-Williams, a senior at Stilwell School of the Arts. Industry judges will rank performances. "We want our

The dance program will have its recital on March 22 at Riverdale Town Center. Dance instructor Crystal Devaughn is allowing upperclassman to take a new leadership role in the annual production. "They are taking over planning, recital tryouts, costuming, and will do some choreograpphy. It is good to see our eighth graders be leaders."

Market Day. Fellow accessory makers Gabrielle Ibalo and Nyla Elliott, said their "Love Braclets" sold out of its customized brand that allowed shoppers to add their names. The team made $107 on Market Day. The key is to diversify, Elliott said. "We had bracelets for males and females. We are still selling them." The team that produced Drip Lips coconut lip gloss is also still selling products. One of their best customers is Ebonne Craft,

Dean of Arts. "I use it everyday," Craft said. "I love their lip gloss. It's natural and it's light, but also stylish. It goes with any ensemble." Marketing gave one team a competitive edge. Teammates Markel Johnson, Caleb Thomas, and Cameron Jones wore pins on their shirts to attract attention to their pin and button business. "We were top sellers," Thomas said. They made $144.

MILESTONES EXAMS TO BE HELD IN APRIL

Utopian Academy is preparing students for success on the Georgia Milestones Assessments, which will be administered after Spring Break in April. Students have been invited to attend Saturday School on March 7, 14, 21, and 28 to receive support in subjects that will be tested on the exam. The program is an extended learning opportunity. In addition, assignments are also

given on SuccessMaker software so that students can practice at home. UAFA is a state leader among commission charter schools for its performance on the Milestones. In 2019, UAFA outperformed Clayton County Schools in math, science, reading, and language arts in grades 6-8. "We work to make sure our students are well prepared ," said Dr. Ron Boykins, UAFA middle school principal.

UAFA's new offerings are attracting parents interested in enrolling in a school that provides a K-8 education under one roof. UAFA won approval from the Clayton County Board of Education to open an elementary school in the 2020-21 academic year. UAFA Founder and Superintendent Dr. Artesius Miller has been working with a team of administrators and faculty members to develop a plan for the new school, including writing a new curriculum, searching for elementary school teachers and a principal, and recruiting students. "Our school is an open book. We want you to be a part of the process," Miller said to a crowd of parents at a recent Open House. "We are all about parental engagement. If you believe children can realize their dreams. Great things happen." Miller then shared the history of UAFA, including opposition to the school in its early years. He also discussed student successes and news of its close ties with Clayton County Schools. He warned parents "that if you wait to enroll, there is a likelihood that a seat will not be available."

Several parents in the audience were excited about the idea of sending their aspiring musicians, actors, chefs, and directors to UAFA in the fall. The school is open for tours from 9 - 11 a.m. Tuesdays and Thursdays. The final Open House will be held on March 11. New applicant registration documents are due by April 10. A school lottery is scheduled for April 30 if necessary to keep class sizes small. Fifth grader Connor Bruce, who came to Open House in February with his grandmother said he would like to "start classes tomorrow. I have heard a lot of good things. I think it will be fun here," he said. "I like drawing and photography." His friend José Juarez also planned to apply."I think it is really cool that they have more art classes and activities here." Sheena Wave said her daughter Clarke wants to study dance. Ware plans to enroll her in the new kindergarten class. "The other school we are zoned for, she cannot go there. I did some research on their test scores. I think this will be a better fit for her. She is interested in dance. We only live about six minutes from here."

Two Utopian Academy scholars have taken their passion for acting to the next level. They have agents and screen time. Sixth grader Jonah

class, and now I'm here. The thing that I like about acting is that it is so versatile. You can do it at any age. I get to continue working on my skills at Utopian. It is a versatile learning environment."

Slade began his acting career in elementary school. He became interested in acting because his stepmother was working as an actor.

Slade has appeared in a Toyota commercial that was filmed in "I tried it and I Atlanta and the really liked it, so I television show just kept doing it," "Black Lightning," Slade said. "First I was getting help at among other projects. He says home with pointers and tips. he hopes to work Then, I took a Troy as a pilot and actor when he is an Rollins acting adult.

Seventh grader Jomar Crawford got his big break at UAFA when he was selected by a talent scout at J. Pervis Talent Agency Inc. after submitting headshots and performing a monologue. Crawford starred in a recent school musical. Now, he has a Hollywood agent.

He landed a part in the Lifetime holiday movie, starring Kirstie Alley. "It was fun working on a live set. I got to experience new things and see how it would be when I land a lead role," he said. "I hope that my agent books me for something big next."

LIGHTS, CAMERA, ACTION! We are UNIQUE. We are UTOPIAN.

PARTNERSHIPS University of Georgia and Clayton County Extension 4-H are hosting two summer camps for students and 4-H members. The first camp is from June 14-19 in Hampton, GA. The second camp is from June 29-July 3 and from July 13-17 on Tybee Island. To register or sponsor a camper call 770473-3945 or send an email to uge1063@uga.edu.

MENTORING UAFA hosted visits from community partners at the J. Pervis Talent Agency Inc. and Maria Curry of Turner Broadcasting System. The guests toured the campus and met with students and administrators.

LEADERSHIP Utopian alumna Cyniah Chambers stood before judges at American Idol to share her powerful vocal talent. She was praised and given a ticket to Hollywood with three yes votes from the judges. "I voted when she first opened her mouth. That was a clear yes," said Grammy-Award winning singer Lionel Richie.

Utopian Academy scholars performed in the school musical "The Wiz" this academic year. The students received a standing ovation at Stilwell School of the Arts for their singing, dancing, and set design talents.

CONTINUE TO STRIVE FOR EXCELLENCE CLASS OF 2019