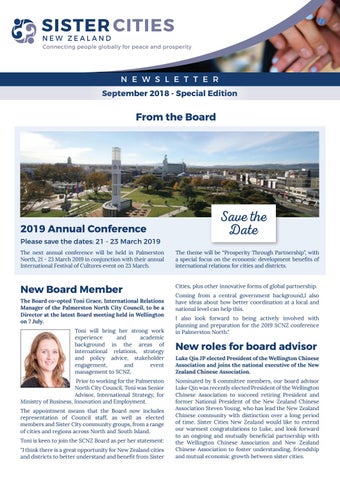 The next annual conference will be held in Palmerston North, 21 - 23 March 2019 in conjunction with their annual International Festival of Cultures event on 23 March.

The theme will be â&amp;#x20AC;&amp;#x153;Prosperity Through Partnershipâ&amp;#x20AC;?, with a special focus on the economic development benefits of international relations for cities and districts.

Cities, plus other innovative forms of global partnership.

The Board co-opted Toni Grace, International Relations Manager of the Palmerston North City Council, to be a Director at the latest Board meeting held in Wellington on 7 July. Toni will bring her strong work experience and academic background in the areas of international relations, strategy and policy advice, stakeholder engagement, and event management to SCNZ. Prior to working for the Palmerston North City Council, Toni was Senior Advisor, International Strategy, for Ministry of Business, Innovation and Employment. The appointment means that the Board now includes representation of Council staff, as well as elected members and Sister City community groups, from a range of cities and regions across North and South Island. Toni is keen to join the SCNZ Board as per her statement: &quot;I think there is a great opportunity for New Zealand cities and districts to better understand and benefit from Sister

Coming from a central government background,I also have ideas about how better coordination at a local and national level can help this. I also look forward to being actively involved with planning and preparation for the 2019 SCNZ conference in Palmerston North.&quot;

My recent visit to Japan By Hiromi Morris, SCNZ President NZ White Sox - National Softball Team with Grassroots Spirit It was a great opportunity for me to spend time as an assistant with the NZ White Sox, “National Team with Grassroots Spirit” for their training in Ichihara City (Chiba), my hometown, prior to the World Women’s Softball Championship held early August. They are all fine, well-mannered young women and I was very impressed with their humbleness and politeness. They are top athletes representing New Zealand, but also they are enthusiastic to learn a different culture and tradition and promoting Kiwi culture through interacting with local people. Despite their hard training schedule they were willing to spend time at softball clinics and friendly matches for school children and a local softball team with disabilities. This experience assured me the importance of people-to-people connection at a grassroots level. Ichihara City is registered as a host town for New Zealand for the 2020 Tokyo Olympic and Paralympic Games participating in their national initiative promoting exchanges.

Auckland Mayor’s visit to Tokyo Coincidentally, Auckland Mayor Phil Goff visited Tokyo while I was in Japan and it was a real pleasure to be able to accompany the Mayor for meetings with Utsunomiya (Tochigi) and Shinagawa (Tokyo) Mayors, as SCNZ President and to assist with some interpreting. ATEED Chief Executive Nick Hill, David Taipari - Chairman of Independent Māori Statutory Board and Marty Rogers - Tāmaki Makaurau Regional Manager, Te Puni Kōkiri also attended these meetings. Both relationships have remained strong through student exchanges over 36 years with Utsunomiya and 25 years with Shinagawa respectively. Nearly 2,000 Utsunomiya students have visited Auckland over the years. Lynfield College has taken a big role for Auckland/ Shinagawa student exchanges with an educational and homestay programme that started in 1990 and a Summer School programme in 1994. For the 25th anniversary of their Friendship City relationship, on behalf of the SCNZ Board, I presented certificates to acknowledge the effort and contribution by the Mayors and Citizens of both cities. Lynfield College Principal Cath Knell and International Education Director Gill Austin joined this special occasion.

Kōrero 2018 Christchurch By Caroline Pope, SCNZ Newsletter Editor Kōrero 2018 Christchurch was held in late June as the third in a nationwide series of panel discussions. These were designed to encourage people-to-people links between young people across ethnicities as well as between generations and different groups within the community. Events had been held in Auckland and Wellington so Christchurch was next on the agenda. Kōrero enabled SCNZ and partners to bring together future leaders to talk about challenges and opportunities of being global citizens and what benefits international connections and cultural diversity have for our communities.

we hope that this conversation inspires future action towards better connections both internationally as well as in our own communities.

It was inspiring to hear from a diverse group of our youth and community leaders, as well as words of wisdom from MP Michael Wood (pictured top right). Our panelists were Philomena Petaia, Kirsten Marsh, Earl Magtibay, Candy Zhang and Ashlyn Oswalt (above right, L-R).

SCNZ board member Marcus Boshier moderated the event and while unfortunately there wasn’t enough time to discuss as many topics as we would have liked, it was a great way to open lines of communication and see a genuine and tangible interaction.

Some of the questions put forward to our panellists included: Do you consider yourself a global citizen? Should secondary languages be compulsory in schools? The panelists gave us some fascinating insights and

Chinese visitors and basic Mandarin phrases; as well as links to further resources developed by New Zealand’s tourism industry. It also has an application form for use of the Year of Tourism logo which is endorsed by both the Chinese and New Zealand governments – Sister Cities and affiliated organisations across New Zealand are welcome to apply to use the logo throughout 2019 and in the buildup to the 2018/19 peak summer season. If you would like to get involved please contact MBIE’s tourism policy team at cnzyot@mbie.govt.nz.

Fukuoka Garden wins national awards Supplied by Auckland Council The Fukuoka Garden in Western Springs Lakeside Park has won Best Overall Project and Best Local Government Project at the Sister City New Zealand Awards – an annual programme recognising outstanding sister city initiatives that foster international understanding and friendship. The Fukuoka Garden is a redevelopment of the original garden built in Auckland Zoo, which was gifted to Auckland in 1989 from Japan’s Fukuoka City in recognition of the sister city relationship. The relocation of the garden from its original site was part of an expansion plan for the zoo. Mayor Phil Goff says the awards are a testament to the strong relationship between Auckland and Fukuoka. “It’s great to see the Fukuoka Garden project, and the Auckland/Fukuoka relationship, recognised at this year’s Sister Cities New Zealand Awards. Auckland and Fukuoka have been sister cities for more than 30 years and in that time our relationship has gone from strength to strength,” says Mayor Phil Goff. “The garden’s redevelopment was an opportunity to deepen our ties with Fukuoka City and create a space that all Aucklanders can enjoy. Together we have created an authentic Japanese garden that incorporates salvaged materials from the original garden, along with some modifications to suit its new location and enhance accessibility. “I look forward to discussing the success of this project during my visit to Fukuoka,” he says.

The community group played a fundamental role in lobbying for the reinstatement of the Fukuoka Garden and was highly involved in the planning, design and construction of the new garden.

Central Auckland oasis Albert-Eden-Roskill Ward Councillor Cathy Casey, who chaired the project steering group, was a strong advocate for the garden’s restoration. “The restored garden remains true to traditional Japanese design and is a real oasis in central Auckland. It’s bigger, better, free of charge and offers a beautiful space for people to enjoy some peace and tranquility,” she says. “There was close collaboration between many areas of the council, together with the Friends of Fukuoka Garden and valued input from Fukuoka City Greenery Department and Professor Kubota, the designer of the original garden, to bring this new garden to life.”

Fusion of cultures The Fukuoka Garden opened at its new location in July 2017 and is a fusion of Japanese and New Zealand native plant species. It has a tea pavilion, waterfall and pond. Some features of the original garden that have been incorporated include four bonsai trees, paving stones, lanterns, a water basin and the entrance feature. The design of the new garden was created by Fukuoka’s ZEN Environmental Design Ltd with Fukuoka City Greenery Department and Professor Iekatsu Kubota. Auckland Council’s landscape architects also worked closely with the Japanese-based designers to ensure the garden remained true to traditional Japanese design. 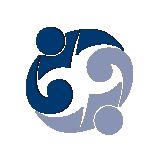