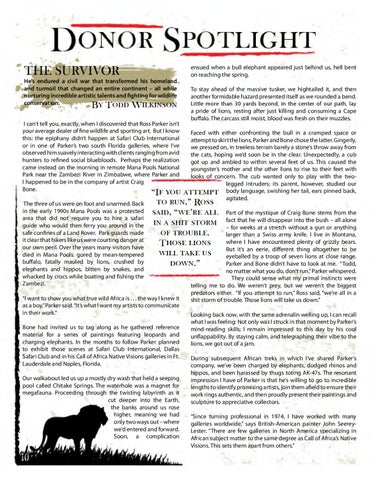 He’s endured a civil war that transformed his homeland and turmoil that changed an entire continent – all while nurturing incredible artistic talents and fighting for wildlife conservation. By Todd Wilkinson I can’t tell you, exactly, when I discovered that Ross Parker isn’t your average dealer of fine wildlife and sporting art. But I know this: the epiphany didn’t happen at Safari Club International or in one of Parker’s two south Florida galleries, where I’ve observed him suavely interacting with clients ranging from avid hunters to refined social bluebloods. Perhaps the realization came instead on the morning in remote Mana Pools National Park near the Zambezi River in Zimbabwe, where Parker and I happened to be in the company of artist Craig Bone. The three of us were on foot and unarmed. Back in the early 1990s Mana Pools was a protected area that did not require you to hire a safari guide who would then ferry you around in the safe confines of a Land Rover. Park guards made it clear that hikers like us were courting danger at our own peril. Over the years many visitors have died in Mana Pools: gored by mean-tempered buffalo, fatally mauled by lions, crushed by elephants and hippos, bitten by snakes, and whacked by crocs while boating and fishing the Zambezi.

To stay ahead of the massive tusker, we hightailed it, and then another formidable hazard presented itself as we rounded a bend. Little more than 30 yards beyond, in the center of our path, lay a pride of lions, resting after just killing and consuming a Cape buffalo. The carcass still moist, blood was fresh on their muzzles. Faced with either confronting the bull in a cramped space or attempt to skirt the lions, Parker and Bone chose the latter. Gingerly, we pressed on, in treeless terrain barely a stone’s throw away from the cats, hoping we’d soon be in the clear. Unexpectedly, a cub got up and ambled to within several feet of us. This caused the youngster’s mother and the other lions to rise to their feet with looks of concern. The cub wanted only to play with the twolegged intruders; its parent, however, studied our attempt body language, swishing her tail, ears pinned back, agitated.

“If you to run,” Ross said, “we’re all in a shit storm of trouble. Those lions will take us down.”

“I want to show you what true wild Africa is . . . the way I knew it as a boy,” Parker said. “It’s what I want my artists to communicate in their work.” Bone had invited us to tag along as he gathered reference material for a series of paintings featuring leopards and charging elephants. In the months to follow Parker planned to exhibit those scenes at Safari Club International, Dallas Safari Club and in his Call of Africa Native Visions galleries in Ft. Lauderdale and Naples, Florida. Our walkabout led us up a mostly dry wash that held a seeping pool called Chitake Springs. The waterhole was a magnet for megafauna. Proceeding through the twisting labyrinth as it cut deeper into the Earth, the banks around us rose higher, meaning we had only two ways out – where we’d entered and forward. Soon, a complication

ensued when a bull elephant appeared just behind us, hell bent on reaching the spring.

Part of the mystique of Craig Bone stems from the fact that he will disappear into the bush – all alone – for weeks at a stretch without a gun or anything larger than a Swiss army knife. I live in Montana, where I have encountered plenty of grizzly bears. But it’s an eerie, different thing altogether to be eyeballed by a troop of seven lions at close range. Parker and Bone didn’t have to look at me. “Todd, no matter what you do, don’t run,” Parker whispered. They could sense what my primal instincts were telling me to do. We weren’t prey, but we weren’t the biggest predators either. “If you attempt to run,” Ross said, “we’re all in a shit storm of trouble. Those lions will take us down.” Looking back now, with the same adrenalin welling up, I can recall what I was feeling: Not only was I struck in that moment by Parker’s mind-reading skills; I remain impressed to this day by his cool unflappability. By staying calm, and telegraphing their vibe to the lions, we got out of a jam. During subsequent African treks in which I’ve shared Parker’s company, we’ve been charged by elephants, dodged rhinos and hippos, and been harassed by thugs toting AK-47s. The resonant impression I have of Parker is that he’s willing to go to incredible lengths to identify promising artists, join them afield to ensure their work rings authentic, and then proudly present their paintings and sculpture to appreciative collectors. “Since turning professional in 1974, I have worked with many galleries worldwide,” says British-American painter John SeereyLester. “There are few galleries in North America specializing in African subject matter to the same degree as Call of Africa’s Native Visions. This sets them apart from others.”