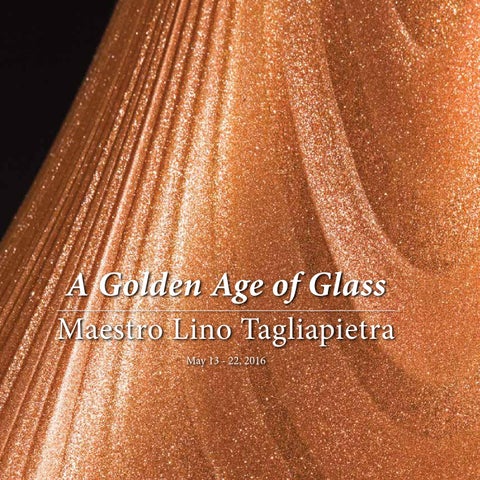 A Golden Age of Glass

A Golden Age is a period in a field of endeavor when great tasks were accomplished. The term originated from early Greek and Roman poets, who used to refer to a time when mankind lived in a better time and was pure.Â

A Golden Age of Glass

Maestro Lino Tagliapietra When we take an adventure, we mine the depths of the unknown in search of physical and spiritual treasures. We risk what is familiar and easy. A maestro of Lino Tagliapietra’s caliber could freely dwell in his comfort zone and still dazzle us with his creations. But his spirit of adventure, risk, and learning drives him to push the medium of glass and test the seemingly boundless limits of his skill. The results are indeed treasures, both in that they are stunning tactile objects to behold and in that they contribute to an intangible awakening of the spirit. Fittingly, Tagliapietra’s recent body of work revitalizes a centuries-old glass-making technique called avventurine (from the Italian for adventure), which began in 17thcentury Murano when a member of the Miotti family accidentally dropped some copper filings into a glass batch. The delicate process of incorporating metal into liquid glass then cooling it in a low oxygen, reducing atmosphere as the mineral deposits clump gingerly together is capricious and often results in failure. Just to prepare the material is a feat of alchemy. When it works, shimmering striations of crystallized metal suspend wondrously in the glass. As Tagliapietra has described it “….sometimes I feel that it is not glass … but I feel the absolute magic and the preciousness of a material that came from the past.”

Though the discovery of avventurine dates back centuries, it is experiencing a Golden Age in the hands of Lino Tagliapietra. He has said that “the material is very important and beautiful, but it is important to make something special.” Beyond the challenge of preparing the material is the enterprise of using it to create art. Tagliapietra explains: “If you compare the chunk of avventurine glass in a solid form on the table you can see it is a beautiful piece of glass—a beautiful material. Then to transform this beautiful material into a sculpture is sometimes more challenging—not only because of the difficulty of working with the material technically, but because it is so beautiful by itself.” Yet, Tagliapietra does just that, metamorphosing a beautiful material into an even richer treasure that quenches both our lust for beauty and our fundamental pursuit of the sublime. The extraordinarily attenuated necks in the Dinosaur series and the swan-like Oca curve and stretch the glass to ethereal heights. Alternatively, the Cuore D’oro balances its weight on a narrow point and swells like an organ filling with air. The serpentine Fenice works and the winged Batman reveal how colors can vary from silver to gold, copper red to blue, purple to green depending on the filtering effects of the colored glass comprising the body of the material, and how the suspended metal deposits can be pulled into assorted shapes. Shakespeare’s admonition not to gild the lily flounders in the presence on Tagliapietra’s Goccia d’Oro, or Golden Teardrop. Tagliapietra’s gift is that he elevates the beautiful to the transcendent with grace and humility. His admiration for the magic of avventurine glass goes back to his childhood, from which he also learned the spirit of adventure that allows him to bring this venerable material to a modern and breathtaking level.

â&#x20AC;&#x153;For me, it is a really great honor and pleasure to handle this glass. Even when I was a kid, I remember everyone talking about the magic of avventurine glass and how difficult it is to work with, but I loved the part about the magic.â&#x20AC;?

“… sometime I feel that it is not glass … I feel the absolute magic of a material that came from the past.”

““If you compare the chunk of avventurine glass in a solid form on the table you can see it is a beautiful piece of glass—a beautiful material—then to transform this beautiful material into a sculpture is sometimes more challenging, not only because of the difficulty of working with the material technically, but because it is so beautiful by itself. That is why it is difficult to approach.”

“It’s true, the material is very important and beautiful, but it is important to make something special, to make it human—make it come alive.”

Beginning in the mid 1940’s until 1989, Maestro Lino Tagliapietra worked in various for-profit Murano factories including Vetreria Galliano Ferro, Venini & Co., and finally as the Artistic and Technical Director of Effetre International (1976-1989). In the summer of 1979, Lino was invited to the Pilchuck Glass School in Stanwood, Washington. From this point on, glassblowing would undergo a profound transformation. Tagliapietra generously shared what he knew with artists in the United States and subsequently throughout the world, because Lino believed that if glassmaking at its highest level was to survive, it must expand beyond the island of Murano. During his more than 30 years of international teaching, he has instilled a demand for excellence, a strong work ethic, and a love of the medium that has changed and elevated the glass art movement forever. Defying criticism from the community back home, Tagliapietra has never stopped sharing his knowledge. But the giving was not a one-way street; Tagliapietra benefited equally from the young artists that he taught and with whom he collaborated. After years of factory production work, Tagliapietra came face-to-face with new ways of regarding the material and with individuals who considered it a medium for art. They were blowing glass for the sheer joy and challenge of it. This creative exchange with artists throughout the world expanded Lino’s ideas for what can be accomplished with the medium of glass. We see in Lino‘s work the highest level of skill and mastery of material and a personal quest for new discoveries. Tagliapietra’s career is defined by dedication to workmanship and innovation. Lino’s work has a presence which references yet transcends time and at the age of 81, Lino continues to challenge himself by finding the next exciting or sublime form of expression and creativity. His latest works made at the Museum of Glass, Tacoma, WA in January (2016) were some of the most powerful works I have seen in blown glass. We are so fortunate in our lifetime to witness a maestro and artist in one, who through his openness to life and humanity is able to transform avventurine and silica into these miraculous works of art. Schantz Galleries is proud to present this special exhibition of works featuring these sculptural works in avventurine glass by Lino Tagliapietra. 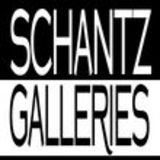 A Golden Age in Glass

A Golden Age in Glass