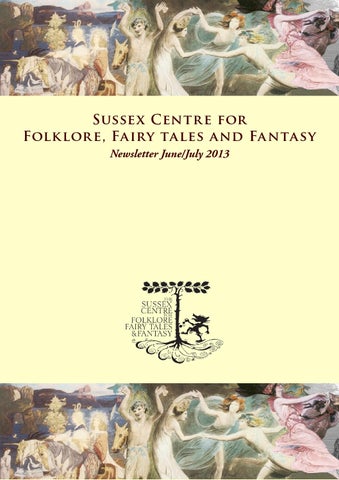 HIS EXHIBITION WILL feature the illustrations of six familiar and much-loved fairy-tales – Little Red Riding Hood, Cinderella, Snow White, Sleeping Beauty, Rapunzel and Beauty and the Beast – from collections by Grimm, Perrault and others. As well as framed pictures, there will also be first edition books and other artefacts of various illustrators, among them Arthur Rackham, Charles Robinson, Mervyn Peake and Mabel Lucie Attwell. ‘Grimm Girls: Picturing the “Princess”’ is curated by Dr Anne Anderson, a Visiting Research Fellow at the University of Chichester, in association with the University’s English Department and the Sussex Centre for Folklore, Fairy Tales and Fantasy. Dr Anderson and leading fantasy and fairy-tale experts Terri Windling, Maria Nikolajeva and Jack Zipes will give presentations on the art of illustrating fairy-tales at a one-day symposium to be held at the University of Chichester on Monday 25 November. This event is open to the public.

A Review of ‘Conteuses: An Evening with K ate Bernheimer’, 7 June 2013 By Joanna Coleman

HIS SURREAL EVENING was organised by surrealist scholar Dr Catriona McAra, who was dressed in black and white as Lucy Gold, one of Bernheimer’s central characters. We were hosted by Danielle Arnaud, whose London house was also a contemporary art gallery. Also there were Kate Bernheimer, described by Helen Pilinovsky as ‘a latter-day Rumpelstilstkin’, ‘turning the straw of the two-dimensional modern stereotype of the fairy tale into the gold of complex subversion’,1 Samantha Sweeting, shape-shifter of modern art, Tessa Farmer, whose fairies have infiltrated every­ where from the Museum of Natural History to Tasmania, as well as writers and editors from Bernheimer’s shortly to be published collection of re-written myths, including Aamer Hussein and Elanor Dymott. McAra introduced the evening by inviting us to ponder the role of contemporary feminist practice in the tales woven, fabricated, diagrammed or digitised in the 21st century. Bernheimer read an extract from her new novel, Happy Endings, whose heroine has committed suicide and is employed by unnamed powers to accompany other suicides in their final moments. The extract began with the description of a town in the wake of an erupted volcano – ash everywhere, like snow. Uniformity, a technique identified by Max

Luthi, Bernheimer’s ‘aesthetic and ethical guru’,2 as typical to the fairy tale, is here achieved not through artifice but through natural disaster; this is not a city of gold or silver, but infinite ash. Happy Endings’ particular version of uniformity seemed both ancient and modern, uniquely relevant to a contemporary world in which our own wondrous artifice is bordered by the threat of catastrophe. The second piece Bernheimer shared with us was part of a series of short films co-created with Noah Saterstrom. It narrated the tale of a brother and sister trying to survive in the cruelty of a postapocalyptic space. Whether that apocalypse be the loss of the parents or the loss of fellow humanity is not specified – like a modern Hansel and Gretel, the children are simply trying to reach home. Samantha Sweeting then presented a filmed meditation on her recent art installations, which include the intimate study of metamorphosis, breastfeeding and nurture, Bestilalia (I never imagined life without you), and He loved her and sometimes she loved him too, in which the act of sleeping beside another becomes an art installation.

Tessa Farmer’s installations, from a dead possum assailed by bees and beetles (fairy artillery) to a fairy nest within a mummified, medieval dog, were grotesque and bizarre, and the fairies intricate 2  Kate Bernheimer, ‘The Fairy Way of Reading (and Writing): An Introduction,’ Evening Will Come: A Monthly Journal of Poetics 30 (2013): n.pag. Web. 25 June 2013.

creations of ruthless horror. They at once charm us with their detail and make us ponder uncomfortably just what our own actions would look like, were we to be 1cm tall and installed in a museum. In Jack Zipes’ most recent book The Irresistible Fairy Tale, he posits that the fairy tale is essentially a utopian genre, where ‘the course of things is ordered in such a way that it fully corresponds to the demands of naïve morality, in other words, to our absolute instinctual judgement of what is good and just.’3 Bernheimer’s response was that the fairy tale is utopian because it is a space in which there is no limitation. Providing us with a way of thinking needed today more than ever, fairy tales are places of unlimited possibility where the way forward is often the gravest, the strangest, and the greatest. The 7th June was a thoroughly unique evening in which this possibility was fostered and celebrated. 3  Jack Zipes, An Irresistible Fairy Tale (Princeton: Princeton University Press, 2012), Kindle edition, n.pag.

Cinderella vs Jack   in gender divide

RECENT SURVEY of over 1,000 UK parents showed a traditional gender divide when choosing their favourite fairy tales. When asked to name their favourite fairy tale, 32% of mums and 34% of daughters chose Cinderella, while 30% of dads and 27% of sons chose Jack and the Beanstalk. The survey also found that 3 in 10 parents choose not to read fairy tales with their children, with sons more likely to be disinterested in fairy tales than daughters. The figures were released at the opening of National Bookstart Week, during which children will be invited to take part in fairy tale-themed activities in their local libraries and bookshops. For the full article, visit the Booktrust’s website.

Maleficent Directed by Robert Stromberg and starring Angelina Jolie as the title character, this film will focus on the untold story of the evil witch. To be released in July 2014.

Into the Woods A witch (Meryl Streep) conspires to teach important lessons to various characters of popular children’s stories including Little Red Riding Hood (Jonny Depp plays the Wolf ), Cinderella (rumoured to be Anna Kendrick, with Jake Gyllenhaal to play her prince), Jack and the Beanstalk, and Rapunzel. James Corden and Emily Blunt will play a baker and his wife. To be released December 2014.

Cinderella Kenneth Branagh is set to direct a live-action ‘Cinderella’, with Helena Bonham Carter as the fairy godmother and Cate Blanchett as the wicked stepmother. Downton Abbey’s Lily James will play the eponymous role. To be released March 2015.

Pan In a dark reimagining of J.M. Barrie’s Peter Pan, Aaron Eckhart will play detective Hook, on the trail of a childlike kidnapper. AnnaSophia Robb plays sole survivor Wendy, who helps him on his quest. Sean Bean is in the role of Smee, chief detective and Hook’s lone ally on the police force. There is also a ‘Peter Pan Begins’ in the works, featuring Channing Tatum, and Hunger Games director Gary Ross plans to direct an adaptation of the 2004 children’s book Peter and the Starcatchers.

In a 3D period epic, a young commander (Liam Hemsworth) joins forces with Sinbad and Aladdin, after his king is murdered in a coup, to rescue Queen Scheherazade. To be released 2014.

Pinocchio Guillermo del Toro is producing a 3D stop-motion animated film of Pinocchio; the artwork released so far is gorgeous but the project is currently on hold.

Leprechaun Facts LiveScience.com, of all places, has published this handy set of leprechaun facts, compiled by Benjamin Radford, deputy editor of Skeptical Inquirer.

How to get your fairy-tale fix Ten ways to keep up-to-date with fairy tales. With retellings, novels, television series, and movies, there are lots of ways to maintain your recommended daily intake of fairy tales.

A Triune Tale of Diminutive Swine ‘The Three Little Pigs’ told in a steampunk style, by John Branyan and Bret Hawkins. Published by the Rockshow Comedy Store.

RAMARYE ISSUE 3 is now available, with contents as follows:

• ‘Hans Christian Andersen: It’s Me The Story’s About’, Neil Philip • ‘The Well of D’yerree-in-Dowan’, Patrick Ryan • ‘Dragons of East and West’, Rosalind Kerven • ‘Death and a pickled onion’, Jakob Löfgren • ‘My Favourite Story When I was Young’, William Gray • A review of Sophia Kingshill and Jennifer Westwood’s The Fabled Coast, Jacqueline Simpson • A review of Peter Davies’ The Fairies Return, Or, New Tales for Old, Andrew Teverson 10

HUGELY SUCCESSFUL project to teach the traditional songs of the South Downs to a new generation of singers came to an end on Sussex Day (16 June) with the launch of a CD at the Weald and Downland Museum. ‘South Downs Songs – live at the Burpham sessions’ was recorded by most of the 250 people who attended workshops run by folk trio Emily and the Hares for the South Downs Society. The two-year project received a grant of £48,000 from the Heritage Lottery Fund. Project Manager Chris Hare said the launch was a great success: “We had upwards of 150 people all coming together to celebrate and to sing,” he explained. “Throughout the day groups of our singers performed for visitors to the museum – part of the Sussex Day celebrations.” ‘South Downs Songs – live at the Burpham sessions’ includes the lyrics of all 21 songs recorded and some cultural and historical background about each song as well. The songs cover all aspects of rural life, including work, trades, drinking, love and songs of wartime. “The Society is very keen to promote the history and heritage of the Downs,” explained Robert Cheesman, Chairman of the South Downs Society. “This wonderful project has surpassed our hopes in achieving this end and reaching out to people of all ages and backgrounds.” Chris Hare believes those that buy the CD will be so impressed they will want to learn the songs themselves.

The CD retails for £10 and is available from the South Downs Society website. Details of all the folk group’s activities, including singing engagements, can be found at www.southdownsfolk­singers.blogspot.com.