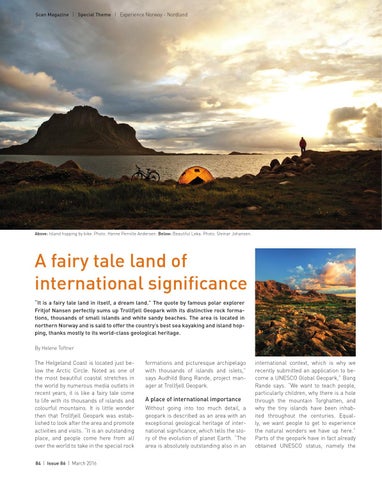 A fairy tale land of international significance “It is a fairy tale land in itself, a dream land.” The quote by famous polar explorer Fritjof Nansen perfectly sums up Trollfjell Geopark with its distinctive rock formations, thousands of small islands and white sandy beaches. The area is located in northern Norway and is said to offer the country’s best sea kayaking and island hopping, thanks mostly to its world-class geological heritage. By Helene Toftner

The Helgeland Coast is located just below the Arctic Circle. Noted as one of the most beautiful coastal stretches in the world by numerous media outlets in recent years, it is like a fairy tale come to life with its thousands of islands and colourful mountains. It is little wonder then that Trollfjell Geopark was established to look after the area and promote activities and visits. “It is an outstanding place, and people come here from all over the world to take in the special rock 84 | Issue 86 | March 2016

A place of international importance Without going into too much detail, a geopark is described as an area with an exceptional geological heritage of international significance, which tells the story of the evolution of planet Earth. “The area is absolutely outstanding also in an

international context, which is why we recently submitted an application to become a UNESCO Global Geopark,” Bang Rande says. “We want to teach people, particularly children, why there is a hole through the mountain Torghatten, and why the tiny islands have been inhabited throughout the centuries. Equally, we want people to get to experience the natural wonders we have up here.” Parts of the geopark have in fact already obtained UNESCO status, namely the