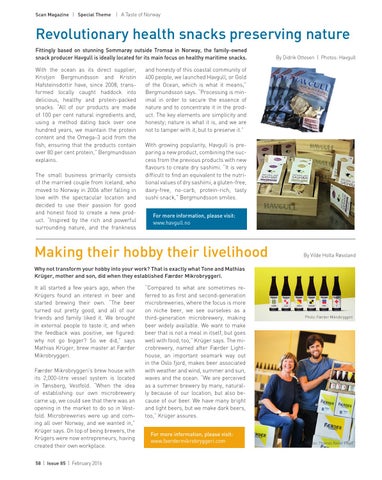 Revolutionary health snacks preserving nature Fittingly based on stunning Sommarøy outside Tromsø in Norway, the family-owned snack producer Havgull is ideally located for its main focus on healthy maritime snacks.

With the ocean as its direct supplier, Kristjon Bergmundsson and Kristin Hafsteinsdottir have, since 2008, transformed locally caught haddock into delicious, healthy and protein-packed snacks. “All of our products are made of 100 per cent natural ingredients and, using a method dating back over one hundred years, we maintain the protein content and the Omega-3 acid from the fish, ensuring that the products contain over 80 per cent protein,” Bergmundsson explains. The small business primarily consists of the married couple from Iceland, who moved to Norway in 2006 after falling in love with the spectacular location and decided to use their passion for good and honest food to create a new product. “Inspired by the rich and powerful surrounding nature, and the frankness

and honesty of this coastal community of 400 people, we launched Havgull, or Gold of the Ocean, which is what it means,” Bergmundsson says. “Processing is minimal in order to secure the essence of nature and to concentrate it in the product. The key elements are simplicity and honesty; nature is what it is, and we are not to tamper with it, but to preserve it.” With growing popularity, Havgull is preparing a new product, combining the success from the previous products with new flavours to create dry sashimi. “It is very difficult to find an equivalent to the nutritional values of dry sashimi, a gluten-free, dairy-free, no-carb, protein-rich, tasty sushi snack,” Bergmundsson smiles. For more information, please visit: www.havgull.no

Making their hobby their livelihood

Why not transform your hobby into your work? That is exactly what Tone and Mathias Krüger, mother and son, did when they established Færder Mikrobryggeri. It all started a few years ago, when the Krügers found an interest in beer and started brewing their own. “The beer turned out pretty good, and all of our friends and family liked it. We brought in external people to taste it, and when the feedback was positive, we figured: why not go bigger? So we did,” says Mathias Krüger, brew master at Færder Mikrobryggeri. Færder Mikrobryggeri’s brew house with its 2,000-litre vessel system is located in Tønsberg, Vestfold. “When the idea of establishing our own microbrewery came up, we could see that there was an opening in the market to do so in Vestfold. Microbreweries were up and coming all over Norway, and we wanted in,” Krüger says. On top of being brewers, the Krügers were now entrepreneurs, having created their own workplace. 58 | Issue 85 | February 2016

“Compared to what are sometimes referred to as first and second-generation microbreweries, where the focus is more on niche beer, we see ourselves as a third-generation microbrewery, making beer widely available. We want to make beer that is not a meal in itself, but goes well with food, too,” Krüger says. The microbrewery, named after Færder Lighthouse, an important seamark way out in the Oslo fjord, makes beer associated with weather and wind, summer and sun, waves and the ocean. “We are perceived as a summer brewery by many, naturally because of our location, but also because of our beer. We have many bright and light beers, but we make dark beers, too,” Krüger assures. For more information, please visit: www.faerdermikrobryggeri.com