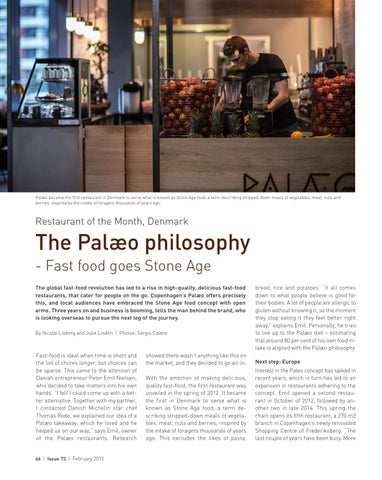 Palæo became the first restaurant in Denmark to serve what is known as Stone Age food, a term describing stripped-down meals of vegetables, meat, nuts and berries, inspired by the intake of foragers thousands of years ago.

Restaurant of the Month, Denmark

The Palæo philosophy - Fast food goes Stone Age The global fast-food revolution has led to a rise in high-quality, delicious fast-food restaurants, that cater for people on the go. Copenhagen’s Palæo offers precisely this, and local audiences have embraced the Stone Age food concept with open arms. Three years on and business is booming, tells the man behind the brand, who is looking overseas to pursue the next leg of the journey. By Nicolai Lisberg and Julie Lindén | Photos: Sergio Calero

Fast-food is ideal when time is short and the list of chores longer, but choices can be sparse. This came to the attention of Danish entrepreneur Peter Emil Nielsen, who decided to take matters into his own hands. “I felt I could come up with a better alternative. Together with my partner, I contacted Danish Michelin star chef Thomas Rode, we explained our idea of a Palæo takeaway, which he loved and he helped us on our way,” says Emil, owner of the Palæo restaurants. Research

bread, rice and potatoes. “It all comes down to what people believe is good for their bodies. A lot of people are allergic to gluten without knowing it, so the moment they stop eating it they feel better right away,” explains Emil. Personally, he tries to live up to the Palæo diet – estimating that around 80 per cent of his own food intake is aligned with the Palæo philosophy.

showed there wasn’t anything like this on the market, and they decided to go all-in.

With the ambition of making delicious, quality fast-food, the first restaurant was unveiled in the spring of 2012. It became the first in Denmark to serve what is known as Stone Age food, a term describing stripped-down meals of vegetables, meat, nuts and berries, inspired by the intake of foragers thousands of years ago. This excludes the likes of pasta,

Interest in the Paleo concept has spiked in recent years, which in turn has led to an expansion in restaurants adhering to the concept. Emil opened a second restaurant in October of 2012, followed by another two in late 2014. This spring the chain opens its fifth restaurant, a 270 m2 branch in Copenhagen’s newly renovated Shopping Centre of Frederiksberg. “The last couple of years have been busy. More