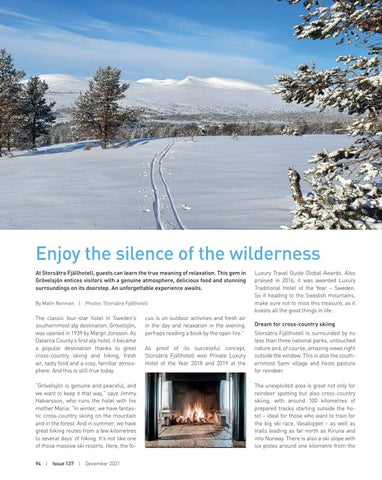 Enjoy the silence of the wilderness At Storsätra Fjällhotell, guests can learn the true meaning of relaxation. This gem in Grövelsjön entices visitors with a genuine atmosphere, delicious food and stunning surroundings on its doorstep. An unforgettable experience awaits. By Malin Norman  |  Photos: Storsätra Fjällhotell

The classic four-star hotel in Sweden’s southernmost alp destination, Grövelsjön, was opened in 1939 by Margit Jonsson. As Dalarna County’s first alp hotel, it became a popular destination thanks to great cross-country skiing and hiking, fresh air, tasty food and a cosy, familiar atmosphere. And this is still true today. “Grövelsjön is genuine and peaceful, and we want to keep it that way,” says Jimmy Halvarsson, who runs the hotel with his mother Maria. “In winter, we have fantastic cross-country skiing on the mountain and in the forest. And in summer, we have great hiking routes from a few kilometres to several days’ of hiking. It’s not like one of those massive ski resorts. Here, the fo94  |  Issue 137  |  December 2021

cus is on outdoor activities and fresh air in the day and relaxation in the evening, perhaps reading a book by the open fire.” As proof of its successful concept, Storsätra Fjällhotell won Private Luxury Hotel of the Year 2018 and 2019 at the

Luxury Travel Guide Global Awards. Also praised in 2016, it was awarded Luxury Traditional Hotel of the Year – Sweden. So if heading to the Swedish mountains, make sure not to miss this treasure, as it boasts all the good things in life. Dream for cross-country skiing Storsätra Fjällhotell is surrounded by no less than three national parks, untouched nature and, of course, amazing views right outside the window. This is also the southernmost Sami village and hosts pasture for reindeer. The unexploited area is great not only for reindeer spotting but also cross-country skiing, with around 100 kilometres of prepared tracks starting outside the hotel – ideal for those who want to train for the big ski race, Vasaloppet – as well as trails leading as far north as Kiruna and into Norway. There is also a ski slope with six pistes around one kilometre from the