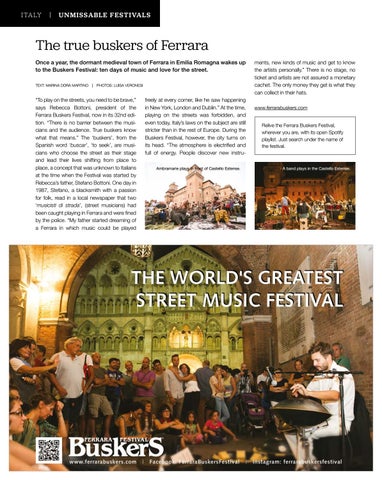 The true buskers of Ferrara Once a year, the dormant medieval town of Ferrara in Emilia Romagna wakes up to the Buskers Festival: ten days of music and love for the street. TEXT: MARINA DORA MARTINO  |  PHOTOS: LUISA VERONESI

“To play on the streets, you need to be brave,” says Rebecca Bottoni, president of the Ferrara Buskers Festival, now in its 32nd edition. “There is no barrier between the musicians and the audience. True buskers know what that means.” The ‘buskers’, from the Spanish word ‘buscar’, ‘to seek’, are musicians who choose the street as their stage and lead their lives shifting from place to place, a concept that was unknown to Italians at the time when the Festival was started by Rebecca’s father, Stefano Bottoni. One day in 1987, Stefano, a blacksmith with a passion for folk, read in a local newspaper that two ‘musicisti di strada’, (street musicians) had been caught playing in Ferrara and were fined by the police. “My father started dreaming of a Ferrara in which music could be played

freely at every corner, like he saw happening in New York, London and Dublin.” At the time, playing on the streets was forbidden, and even today, Italy’s laws on the subject are still stricter than in the rest of Europe. During the Buskers Festival, however, the city turns on its head. “The atmosphere is electrified and full of energy. People discover new instruAmbramarie plays in front of Castello Estense.

ments, new kinds of music and get to know the artists personally.” There is no stage, no ticket and artists are not assured a monetary cachet. The only money they get is what they can collect in their hats. www.ferrarabuskers.com Relive the Ferrara Buskers Festival, wherever you are, with its open Spotify playlist. Just search under the name of the festival.

A band plays in the Castello Estense.