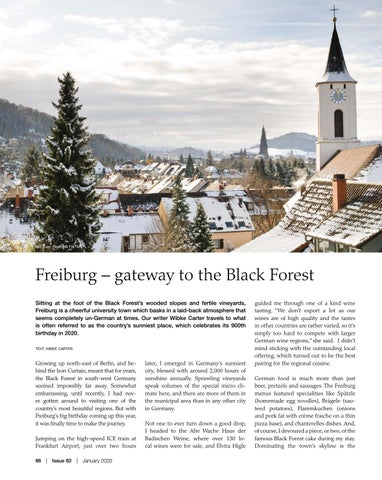 Freiburg – gateway to the Black Forest Sitting at the foot of the Black Forest’s wooded slopes and fertile vineyards, Freiburg is a cheerful university town which basks in a laid-back atmosphere that seems completely un-German at times. Our writer Wibke Carter travels to what is often referred to as the country’s sunniest place, which celebrates its 900th birthday in 2020. TEXT: WIBKE CARTER

Growing up north-east of Berlin, and behind the Iron Curtain, meant that for years, the Black Forest in south-west Germany seemed impossibly far away. Somewhat embarrassing, until recently, I had never gotten around to visiting one of the country’s most beautiful regions. But with Freiburg’s big birthday coming up this year, it was finally time to make the journey. Jumping on the high-speed ICE train at Frankfurt Airport, just over two hours 86  |  Issue 82  |  January 2020

later, I emerged in Germany’s sunniest city, blessed with around 2,000 hours of sunshine annually. Sprawling vineyards speak volumes of the special micro climate here, and there are more of them in the municipal area than in any other city in Germany. Not one to ever turn down a good drop, I headed to the Alte Wache Haus der Badischen Weine, where over 130 local wines were for sale, and Elvira Higle

guided me through one of a kind wine tasting. “We don’t export a lot as our wines are of high quality and the tastes in other countries are rather varied, so it’s simply too hard to compete with larger German wine regions,” she said. I didn’t mind sticking with the outstanding local offering, which turned out to be the best pairing for the regional cuisine. German food is much more than just beer, pretzels and sausages. The Freiburg menus featured specialities like Spätzle (homemade egg noodles), Brägele (sauteed potatoes), Flammkuchen (onions and pork fat with crème fraiche on a thin pizza base), and chanterelles dishes. And, of course, I devoured a piece, or two, of the famous Black Forest cake during my stay. Dominating the town’s skyline is the