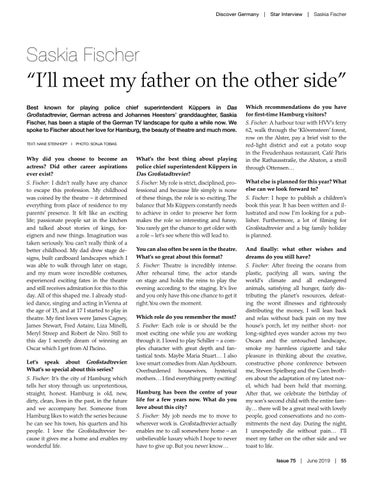 “I’ll meet my father on the other side” Best known for playing police chief superintendent Küppers in Das Großstadtrevier, German actress and Johannes Heesters’ granddaughter, Saskia Fischer, has been a staple of the German TV landscape for quite a while now. We spoke to Fischer about her love for Hamburg, the beauty of theatre and much more. TEXT: NANE STEINHOFF  I  PHOTO: SONJA TOBIAS

Which recommendations do you have for first-time Hamburg visitors? S. Fischer: A harbour tour with HVV’s ferry 62, walk through the ‘Klövensteen’ forest, row on the Alster, pay a brief visit to the red-light district and eat a potato soup in the Freudenhaus restaurant, Café Paris in the Rathausstraße, the Abaton, a stroll through Ottensen…

Why did you choose to become an actress? Did other career aspirations ever exist?

S. Fischer: I didn’t really have any chance to escape this profession. My childhood was coined by the theatre – it determined everything from place of residence to my parents’ presence. It felt like an exciting life; passionate people sat in the kitchen and talked about stories of kings, foreigners and new things. Imagination was taken seriously. You can’t really think of a better childhood. My dad drew stage designs, built cardboard landscapes which I was able to walk through later on stage, and my mum wore incredible costumes, experienced exciting fates in the theatre and still receives admiration for this to this day. All of this shaped me. I already studied dance, singing and acting in Vienna at the age of 15, and at 17 I started to play in theatre. My first loves were James Cagney, James Stewart, Fred Astaire, Liza Minelli, Meryl Streep and Robert de Niro. Still to this day I secretly dream of winning an Oscar which I get from Al Pacino.

S. Fischer: My role is strict, disciplined, professional and because life simply is none of these things, the role is so exciting. The balance that Ms Küppers constantly needs to achieve in order to preserve her form makes the role so interesting and funny. You rarely get the chance to get older with a role – let’s see where this will lead to.

S. Fischer: I hope to publish a children’s book this year. It has been written and illustrated and now I’m looking for a publisher. Furthermore, a lot of filming for Großstadtrevier and a big family holiday is planned.

You can also often be seen in the theatre. What’s so great about this format?

And finally: what other wishes and dreams do you still have?

S. Fischer: Theatre is incredibly intense. After rehearsal time, the actor stands on stage and holds the reins to play the evening according to the staging. It’s live and you only have this one chance to get it right. You own the moment.

S. Fischer: After freeing the oceans from plastic, pacifying all wars, saving the world’s climate and all endangered animals, satisfying all hunger, fairly distributing the planet’s resources, defeating the worst illnesses and righteously distributing the money, I will lean back and relax without back pain on my tree house’s porch, let my neither short- nor long-sighted eyes wander across my two Oscars and the untouched landscape, smoke my harmless cigarette and take pleasure in thinking about the creative, constructive phone conference between me, Steven Spielberg and the Coen brothers about the adaptation of my latest novel, which had been held that morning. After that, we celebrate the birthday of my son’s second child with the entire family… there will be a great meal with lovely people, good conservations and no commitments the next day. During the night, I unexpectedly die without pain… I’ll meet my father on the other side and we toast to life.

Let’s speak about Großstadtrevier: What’s so special about this series? S. Fischer: It’s the city of Hamburg which tells her story through us: unpretentious, straight, honest. Hamburg is old, new, dirty, clean, lives in the past, in the future and we accompany her. Someone from Hamburg likes to watch the series because he can see his town, his quarters and his people. I love the Großstadtrevier because it gives me a home and enables my wonderful life.

Which role do you remember the most? S. Fischer: Each role is or should be the most exciting one while you are working through it. I loved to play Schiller – a complex character with great depth and fantastical texts. Maybe Maria Stuart… I also love smart comedies from Alan Ayckbourn. Overburdened housewives, hysterical mothers… I find everything pretty exciting! Hamburg has been the centre of your life for a few years now. What do you love about this city? S. Fischer: My job needs me to move to wherever work is. Großstadtrevier actually enables me to call somewhere home – an unbelievable luxury which I hope to never have to give up. But you never know…

What else is planned for this year? What else can we look forward to?