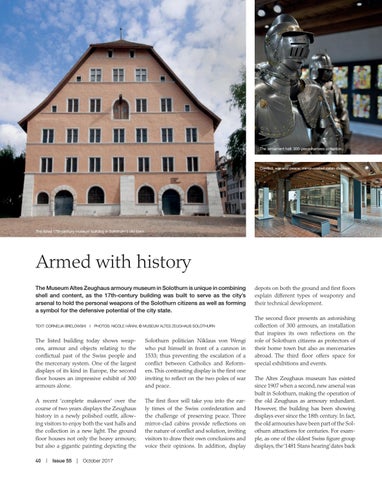 Armed with history The Museum Altes Zeughaus armoury museum in Solothurn is unique in combining shell and content, as the 17th-century building was built to serve as the city’s arsenal to hold the personal weapons of the Solothurn citizens as well as forming a symbol for the defensive potential of the city state. TEXT: CORNELIA BRELOWSKI  I  PHOTOS: NICOLE HÄNNI, © MUSEUM ALTES ZEUGHAUS SOLOTHURN

The listed building today shows weapons, armour and objects relating to the conflictual past of the Swiss people and the mercenary system. One of the largest displays of its kind in Europe, the second floor houses an impressive exhibit of 300 armours alone.

Solothurn politician Niklaus von Wengi who put himself in front of a cannon in 1533; thus preventing the escalation of a conflict between Catholics and Reformers. This contrasting display is the first one inviting to reflect on the two poles of war and peace.

A recent ‘complete makeover’ over the course of two years displays the Zeughaus history in a newly polished outfit, allowing visitors to enjoy both the vast halls and the collection in a new light. The ground floor houses not only the heavy armoury, but also a gigantic painting depicting the

The first floor will take you into the early times of the Swiss confederation and the challenge of preserving peace. Three mirror-clad cabins provide reflections on the nature of conflict and solution, inviting visitors to draw their own conclusions and voice their opinions. In addition, display

depots on both the ground and first floors explain different types of weaponry and their technical development. The second floor presents an astonishing collection of 300 armours, an installation that inspires its own reflections on the role of Solothurn citizens as protectors of their home town but also as mercenaries abroad. The third floor offers space for special exhibitions and events. The Altes Zeughaus museum has existed since 1907 when a second, new arsenal was built in Solothurn, making the operation of the old Zeughaus as armoury redundant. However, the building has been showing displays ever since the 18th century. In fact, the old armouries have been part of the Solothurn attractions for centuries. For example, as one of the oldest Swiss figure group displays, the ‘1481 Stans hearing’ dates back