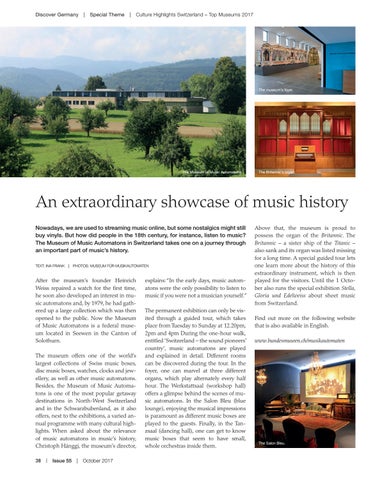 The Museum of Music Automatons.

An extraordinary showcase of music history Nowadays, we are used to streaming music online, but some nostalgics might still buy vinyls. But how did people in the 18th century, for instance, listen to music? The Museum of Music Automatons in Switzerland takes one on a journey through an important part of music’s history. TEXT: INA FRANK  |  PHOTOS: MUSEUM FÜR MUSIKAUTOMATEN

After the museum’s founder Heinrich Weiss repaired a watch for the first time, he soon also developed an interest in music automatons and, by 1979, he had gathered up a large collection which was then opened to the public. Now the Museum of Music Automatons is a federal museum located in Seewen in the Canton of Solothurn. The museum offers one of the world’s largest collections of Swiss music boxes, disc music boxes, watches, clocks and jewellery, as well as other music automatons. Besides, the Museum of Music Automatons is one of the most popular getaway destinations in North-West Switzerland and in the Schwarzbubenland, as it also offers, next to the exhibitions, a varied annual programme with many cultural highlights. When asked about the relevance of music automatons in music’s history, Christoph Hänggi, the museum’s director, 38  |  Issue 55  |  October 2017

explains: “In the early days, music automatons were the only possibility to listen to music if you were not a musician yourself.” The permanent exhibition can only be visited through a guided tour, which takes place from Tuesday to Sunday at 12.20pm, 2pm and 4pm During the one-hour walk, entitled ’Switzerland – the sound pioneers’ country’, music automatons are played and explained in detail. Different rooms can be discovered during the tour. In the foyer, one can marvel at three different organs, which play alternately every half hour. The Werkstattsaal (workshop hall) offers a glimpse behind the scenes of music automatons. In the Salon Bleu (blue lounge), enjoying the musical impressions is paramount as different music boxes are played to the guests. Finally, in the Tanzsaal (dancing hall), one can get to know music boxes that seem to have small, whole orchestras inside them.

Above that, the museum is proud to possess the organ of the Britannic. The Britannic – a sister ship of the Titanic – also sank and its organ was listed missing for a long time. A special guided tour lets one learn more about the history of this extraordinary instrument, which is then played for the visitors. Until the 1 October also runs the special exhibition Stella, Gloria und Edelweiss about sheet music from Switzerland. Find out more on the following website that is also available in English. www.bundesmuseen.ch/musikautomaten