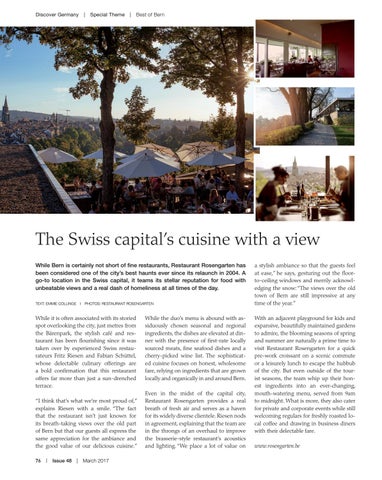 The Swiss capital’s cuisine with a view While Bern is certainly not short of fine restaurants, Restaurant Rosengarten has been considered one of the city’s best haunts ever since its relaunch in 2004. A go-to location in the Swiss capital, it teams its stellar reputation for food with unbeatable views and a real dash of homeliness at all times of the day. TEXT: EMMIE COLLINGE  I  PHOTOS: RESTAURANT ROSENGARTEN

While it is often associated with its storied spot overlooking the city, just metres from the Bärenpark, the stylish café and restaurant has been flourishing since it was taken over by experienced Swiss restaurateurs Fritz Riesen and Fabian Schüttel, whose delectable culinary offerings are a bold confirmation that this restaurant offers far more than just a sun-drenched terrace. “I think that’s what we’re most proud of,” explains Riesen with a smile. “The fact that the restaurant isn’t just known for its breath-taking views over the old part of Bern but that our guests all express the same appreciation for the ambiance and the good value of our delicious cuisine.” 76  |  Issue 48  |  March 2017

While the duo’s menu is abound with assiduously chosen seasonal and regional ingredients, the dishes are elevated at dinner with the presence of first-rate locally sourced meats, fine seafood dishes and a cherry-picked wine list. The sophisticated cuisine focuses on honest, wholesome fare, relying on ingredients that are grown locally and organically in and around Bern. Even in the midst of the capital city, Restaurant Rosengarten provides a real breath of fresh air and serves as a haven for its widely diverse clientele. Riesen nods in agreement, explaining that the team are in the throngs of an overhaul to improve the brasserie-style restaurant’s acoustics and lighting. “We place a lot of value on

a stylish ambiance so that the guests feel at ease,” he says, gesturing out the floorto-ceiling windows and merrily acknowledging the snow: “The views over the old town of Bern are still impressive at any time of the year.” With an adjacent playground for kids and expansive, beautifully maintained gardens to admire, the blooming seasons of spring and summer are naturally a prime time to visit Restaurant Rosengarten for a quick pre-work croissant on a scenic commute or a leisurely lunch to escape the hubbub of the city. But even outside of the tourist seasons, the team whip up their honest ingredients into an ever-changing, mouth-watering menu, served from 9am to midnight. What is more, they also cater for private and corporate events while still welcoming regulars for freshly roasted local coffee and drawing in business diners with their delectable fare. www.rosengarten.be