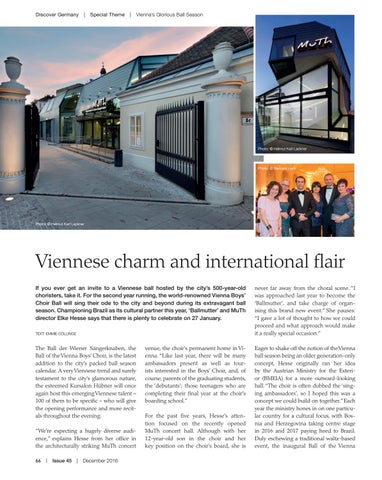 Viennese charm and international flair If you ever get an invite to a Viennese ball hosted by the city’s 500-year-old choristers, take it. For the second year running, the world-renowned Vienna Boys’ Choir Ball will sing their ode to the city and beyond during its extravagant ball season. Championing Brazil as its cultural partner this year, ‘Ballmutter’ and MuTh director Elke Hesse says that there is plenty to celebrate on 27 January. TEXT: EMMIE COLLINGE

The Ball der Wiener Sängerknaben, the Ball of the Vienna Boys’ Choir, is the latest addition to the city’s packed ball season calendar. A very Viennese trend and surely testament to the city’s glamorous nature, the esteemed Kursalon Hübner will once again host this emerging Viennese talent – 100 of them to be specific – who will give the opening performance and more recitals throughout the evening. “We’re expecting a hugely diverse audience,” explains Hesse from her office in the architecturally striking MuTh concert 66  |  Issue 45  |  December 2016

venue, the choir’s permanent home in Vienna. “Like last year, there will be many ambassadors present as well as tourists interested in the Boys’ Choir, and, of course, parents of the graduating students, the ‘debutants’; those teenagers who are completing their final year at the choir’s boarding school.” For the past five years, Hesse’s attention focused on the recently opened MuTh concert hall. Although with her 12-year-old son in the choir and her key position on the choir’s board, she is

never far away from the choral scene. “I was approached last year to become the ‘Ballmutter’, and take charge of organising this brand new event.” She pauses: “I gave a lot of thought to how we could proceed and what approach would make it a really special occasion.” Eager to shake off the notion of the Vienna ball season being an older generation-only concept, Hesse originally ran her idea by the Austrian Ministry for the Exterior (BMEIA) for a more outward-looking ball. “The choir is often dubbed the ‘singing ambassadors’, so I hoped this was a concept we could build on together.” Each year the ministry hones in on one particular country for a cultural focus, with Bosnia and Herzegovina taking centre stage in 2016 and 2017 paying heed to Brazil. Duly eschewing a traditional waltz-based event, the inaugural Ball of the Vienna