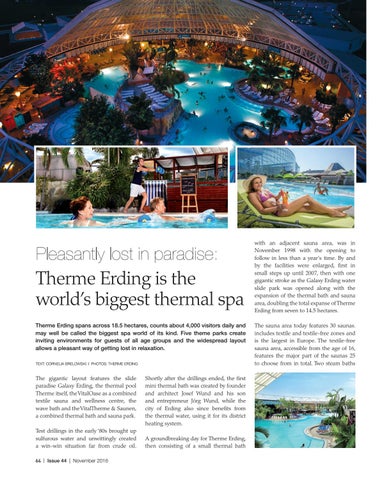 Therme Erding is the world’s biggest thermal spa Therme Erding spans across 18.5 hectares, counts about 4,000 visitors daily and may well be called the biggest spa world of its kind. Five theme parks create inviting environments for guests of all age groups and the widespread layout allows a pleasant way of getting lost in relaxation. TEXT: CORNELIA BRELOWSKI I PHOTOS: THERME ERDING

The gigantic layout features the slide paradise Galaxy Erding, the thermal pool Therme itself, the VitalOase as a combined textile sauna and wellness centre, the wave bath and the VitalTherme &amp; Saunen, a combined thermal bath and sauna park. Test drillings in the early ‘80s brought up sulfurous water and unwittingly created a win-win situation far from crude oil. 64 | Issue 44 | November 2016

Shortly after the drillings ended, the first mini thermal bath was created by founder and architect Josef Wund and his son and entrepreneur Jörg Wund, while the city of Erding also since benefits from the thermal water, using it for its district heating system. A groundbreaking day for Therme Erding, then consisting of a small thermal bath

with an adjacent sauna area, was in November 1998 with the opening to follow in less than a year&#39;s time. By and by the facilities were enlarged, first in small steps up until 2007, then with one gigantic stroke as the Galaxy Erding water slide park was opened along with the expansion of the thermal bath and sauna area, doubling the total expanse of Therme Erding from seven to 14.5 hectares. The sauna area today features 30 saunas. includes textile and textile-free zones and is the largest in Europe. The textile-free sauna area, accessible from the age of 16, features the major part of the saunas 25 to choose from in total. Two steam baths