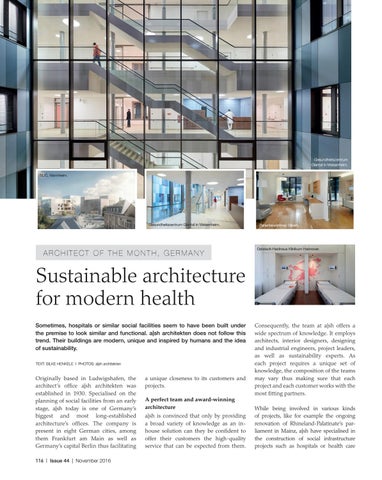 ARCHITECT OF THE MONTH, GERMANY

Sustainable architecture for modern health Sometimes, hospitals or similar social facilities seem to have been built under the premise to look similar and functional. a|sh architekten does not follow this trend. Their buildings are modern, unique and inspired by humans and the idea of sustainability. TEXT: SILKE HENKELE I PHOTOS: a|sh architekten

Originally based in Ludwigshafen, the architect’s office a|sh architekten was established in 1930. Specialised on the planning of social facilities from an early stage, a|sh today is one of Germany’s biggest and most long-established architecture’s offices. The company is present in eight German cities, among them Frankfurt am Main as well as Germany’s capital Berlin thus facilitating 116 | Issue 44 | November 2016

a unique closeness to its customers and projects. A perfect team and award-winning architecture a|sh is convinced that only by providing a broad variety of knowledge as an inhouse solution can they be confident to offer their customers the high-quality service that can be expected from them.

Consequently, the team at a|sh offers a wide spectrum of knowledge. It employs architects, interior designers, designing and industrial engineers, project leaders, as well as sustainability experts. As each project requires a unique set of knowledge, the composition of the teams may vary thus making sure that each project and each customer works with the most fitting partners. While being involved in various kinds of projects, like for example the ongoing renovation of Rhineland-Palatinate’s parliament in Mainz, a|sh have specialised in the construction of social infrastructure projects such as hospitals or health care