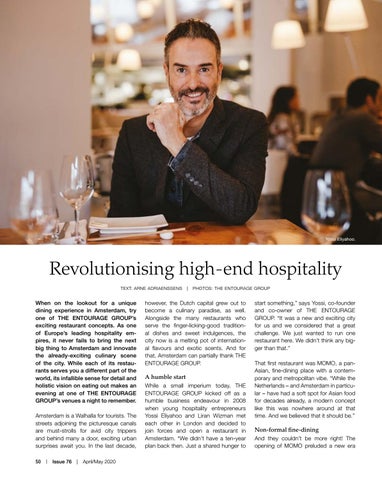 When on the lookout for a unique dining experience in Amsterdam, try one of THE ENTOURAGE GROUP’s exciting restaurant concepts. As one of Europe’s leading hospitality empires, it never fails to bring the next big thing to Amsterdam and innovate the already-exciting culinary scene of the city. While each of its restaurants serves you a different part of the world, its infallible sense for detail and holistic vision on eating out makes an evening at one of THE ENTOURAGE GROUP’s venues a night to remember. Amsterdam is a Walhalla for tourists. The streets adjoining the picturesque canals are must-strolls for avid city trippers and behind many a door, exciting urban surprises await you. In the last decade, 50  |  Issue 76  |  April/May 2020

however, the Dutch capital grew out to become a culinary paradise, as well. Alongside the many restaurants who serve the finger-licking-good traditional dishes and sweet indulgences, the city now is a melting pot of international flavours and exotic scents. And for that, Amsterdam can partially thank THE ENTOURAGE GROUP.

A humble start While a small imperium today, THE ENTOURAGE GROUP kicked off as a humble business endeavour in 2008 when young hospitality entrepreneurs Yossi Eliyahoo and Liran Wizman met each other in London and decided to join forces and open a restaurant in Amsterdam. “We didn’t have a ten-year plan back then. Just a shared hunger to

start something,” says Yossi, co-founder and co-owner of THE ENTOURAGE GROUP. “It was a new and exciting city for us and we considered that a great challenge. We just wanted to run one restaurant here. We didn’t think any bigger than that.” That first restaurant was MOMO, a panAsian, fine-dining place with a contemporary and metropolitan vibe. “While the Netherlands – and Amsterdam in particular – have had a soft spot for Asian food for decades already, a modern concept like this was nowhere around at that time. And we believed that it should be.”

Non-formal fine-dining And they couldn’t be more right! The opening of MOMO preluded a new era