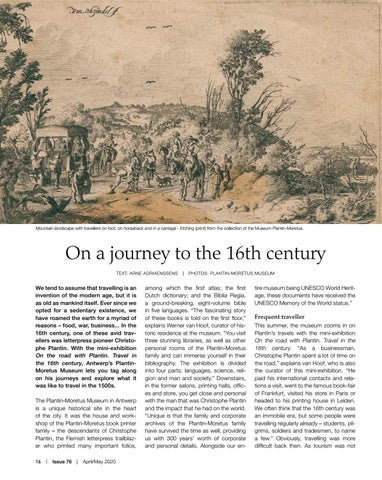 Mountain landscape with travellers on foot, on horseback and in a carriage - Etching (print) from the collection of the Museum Plantin-Moretus.

On a journey to the 16th century TEXT: ARNE ADRIAENSSENS  |  PHOTOS: PLANTIN-MORETUS MUSEUM

We tend to assume that travelling is an invention of the modern age, but it is as old as mankind itself. Ever since we opted for a sedentary existence, we have roamed the earth for a myriad of reasons – food, war, business... In the 16th century, one of these avid travellers was letterpress pioneer Christophe Plantin. With the mini-exhibition On the road with Plantin. Travel in the 16th century, Antwerp’s PlantinMoretus Museum lets you tag along on his journeys and explore what it was like to travel in the 1500s. The Plantin-Moretus Museum in Antwerp is a unique historical site in the heart of the city. It was the house and workshop of the Plantin-Moretus book printer family – the descendants of Christophe Plantin, the Flemish letterpress trailblazer who printed many important folios, 16  |  Issue 76  |  April/May 2020

among which the first atlas; the first Dutch dictionary; and the Biblia Regia, a ground-breaking, eight-volume bible in five languages. “The fascinating story of these books is told on the first floor,” explains Werner van Hoof, curator of historic residence at the museum. “You visit three stunning libraries, as well as other personal rooms of the Plantin-Moretus family and can immerse yourself in their bibliography. The exhibition is divided into four parts: languages, science, religion and man and society.” Downstairs, in the former salons, printing halls, offices and store, you get close and personal with the man that was Christophe Plantin and the impact that he had on the world. “Unique is that the family and corporate archives of the Plantin-Moretus family have survived the time as well, providing us with 300 years’ worth of corporate and personal details. Alongside our en-

tire museum being UNESCO World Heritage, these documents have received the UNESCO Memory of the World status.”

Frequent traveller This summer, the museum zooms in on Plantin’s travels with the mini-exhibition On the road with Plantin. Travel in the 16th century. “As a businessman, Christophe Plantin spent a lot of time on the road,” explains van Hoof, who is also the curator of this mini-exhibition. “He paid his international contacts and relations a visit, went to the famous book-fair of Frankfurt, visited his store in Paris or headed to his printing house in Leiden. We often think that the 16th century was an immobile era, but some people were travelling regularly already – students, pilgrims, soldiers and tradesmen, to name a few.” Obviously, travelling was more difficult back then. As tourism was not