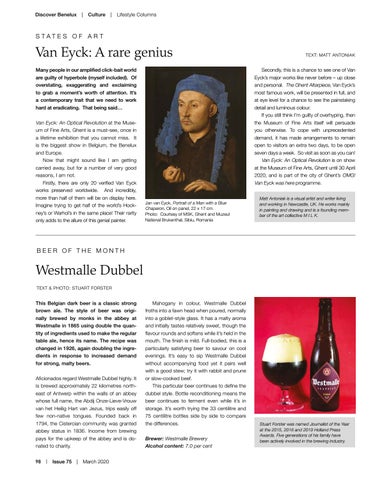 Secondly, this is a chance to see one of Van Eyck’s major works like never before – up close and personal. The Ghent Altarpiece, Van Eyck’s most famous work, will be presented in full, and at eye level for a chance to see the painstaking detail and luminous colour. If you still think I’m guilty of overhyping, then the Museum of Fine Arts itself will persuade you otherwise. To cope with unprecedented demand, it has made arrangements to remain open to visitors an extra two days, to be open seven days a week. So visit as soon as you can! Van Eyck: An Optical Revolution is on show at the Museum of Fine Arts, Ghent until 30 April 2020, and is part of the city of Ghent’s OMG! Van Eyck was here programme.

Many people in our amplified click-bait world are guilty of hyperbole (myself included). Of overstating, exaggerating and exclaiming to grab a moment’s worth of attention. It’s a contemporary trait that we need to work hard at eradicating. That being said…

Van Eyck: An Optical Revolution at the Museum of Fine Arts, Ghent is a must-see, once in a lifetime exhibition that you cannot miss. It is the biggest show in Belgium, the Benelux and Europe. Now that might sound like I am getting carried away, but for a number of very good reasons, I am not. Firstly, there are only 20 verified Van Eyck works preserved worldwide. And incredibly, more than half of them will be on display here. Imagine trying to get half of the world’s Hockney’s or Warhol’s in the same place! Their rarity only adds to the allure of this genial painter.

This Belgian dark beer is a classic strong brown ale. The style of beer was originally brewed by monks in the abbey at Westmalle in 1865 using double the quantity of ingredients used to make the regular table ale, hence its name. The recipe was changed in 1926, again doubling the ingredients in response to increased demand for strong, malty beers. Aficionados regard Westmalle Dubbel highly. It is brewed approximately 22 kilometres northeast of Antwerp within the walls of an abbey whose full name, the Abdij Onze-Lieve-Vrouw van het Heilig Hart van Jezus, trips easily off few non-native tongues. Founded back in 1794, the Cistercian community was granted abbey status in 1836. Income from brewing pays for the upkeep of the abbey and is donated to charity. 98  |  Issue 75  |  March 2020

Mahogany in colour, Westmalle Dubbel froths into a fawn head when poured, normally into a goblet-style glass. It has a malty aroma and initially tastes relatively sweet, though the flavour rounds and softens while it’s held in the mouth. The finish is mild. Full-bodied, this is a particularly satisfying beer to savour on cool evenings. It’s easy to sip Westmalle Dubbel without accompanying food yet it pairs well with a good stew; try it with rabbit and prune or slow-cooked beef. This particular beer continues to define the dubbel style. Bottle reconditioning means the beer continues to ferment even while it’s in storage. It’s worth trying the 33 centilitre and 75 centilitre bottles side by side to compare the differences. Brewer: Westmalle Brewery Alcohol content: 7.0 per cent

Inside the March issue you can enjoy an exclusive interview with Brussels-born comedian Guillermo Guiz, a guide to some of the most delicious Dutch snacks and an inspiring education & training special. There’s also a Rotterdam city special, a bumper guide to Luxembourg and profiles of Belgium’s top breweries, distilleries and winemakers.