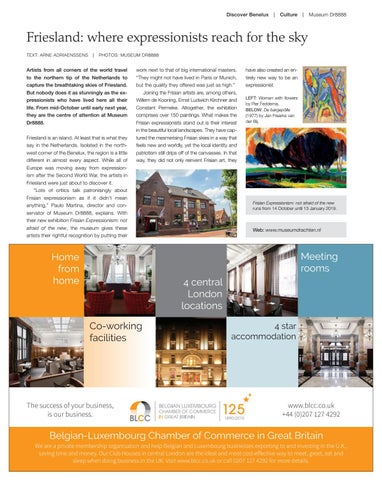 Artists from all corners of the world travel to the northern tip of the Netherlands to capture the breathtaking skies of Friesland. But nobody does it as stunningly as the expressionists who have lived here all their life. From mid-October until early next year, they are the centre of attention at Museum Dr8888. Friesland is an island. At least that is what they say in the Netherlands. Isolated in the northwest corner of the Benelux, the region is a little different in almost every aspect. While all of Europe was moving away from expressionism after the Second World War, the artists in Friesland were just about to discover it. “Lots of critics talk patronisingly about Frisian expressionism as if it didn’t mean anything,” Paulo Martina, director and conservator of Museum Dr8888, explains. With their new exhibition Frisian Expressionism: not afraid of the new, the museum gives these artists their rightful recognition by putting their

work next to that of big international masters. “They might not have lived in Paris or Munich, but the quality they offered was just as high.” Joining the Frisian artists are, among others, Willem de Kooning, Ernst Ludwich Kirchner and Constant Permeke. Altogether, the exhibition comprises over 150 paintings. What makes the Frisian expressionists stand out is their interest in the beautiful local landscapes. They have captured the mesmerising Frisian skies in a way that feels new and worldly, yet the local identity and patriotism still drips off of the canvasses. In that way, they did not only reinvent Frisian art, they

have also created an entirely new way to be an expressionist. LEFT: Woman with flowers by Pier Feddema. BELOW: De bargepôlle (1977) by Jan Frearks van der Bij.

Frisian Expressionism: not afraid of the new runs from 14 October until 13 January 2019.