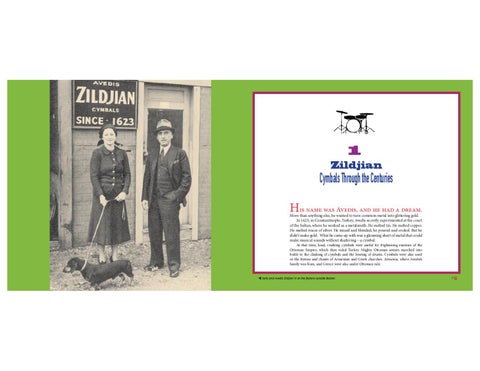 Cymbals Through the Centuries His name was Avedis, and he had a dream.

More than anything else, he wanted to turn common metal into glittering gold. In 1623, in Constantinople, Turkey, Avedis secretly experimented at the court of the Sultan, where he worked as a metalsmith. He melted tin. He melted copper. He melted traces of silver. He mixed and blended, he poured and cooled. But he didn’t make gold. What he came up with was a gleaming sheet of metal that could make musical sounds without shattering—a cymbal.

At that time, loud, crashing cymbals were useful for frightening enemies of the Ottoman Empire, which then ruled Turkey. Mighty Ottoman armies marched into battle to the clashing of cymbals and the beating of drums. Cymbals were also used in the hymns and chants of Armenian and Greek churches. Armenia, where Avedis’s family was from, and Greece were also under Ottoman rule.

Avedis’s cymbal was exceptionally strong, with a clear, powerful sound. Recognizing Avedis as the founder of Turkish cymbal making, the Sultan awarded him eighty gold pieces. He also gave him a last name, Zilciyan, which means “son of a cymbal maker” or “family of cymbal smiths” in Armenian. In English, the name was spelled Zildjian.

years old. Avedis found a job working in a candy factory in Boston. He quickly learned all he could about candy making, and soon started a candy company of his own. One day in 1927, a letter arrived for Avedis from his Uncle Aram in Turkey. The time had come for Avedis to take over the family cymbalmaking business in Turkey, Aram wrote. Avedis wasn’t sure what to do. He was married now, with children. He was already running his own successful company. He didn’t want to return to Turkey. He loved his life in America, where he’d become a citizen in 1916.

With the Sultan’s money, Avedis launched a business making his metal noisemakers. He started a cymbal foundry in Samatya, a suburb of Constantinople, employing his family to help him. For generations, they kept the formula for making cymbals top secret. Only two people knew the process: the head of the company and his eldest son. In the 1700s and 1800s, as European classical composers began incorporating cymbals into their music, the instrument became an important and permanent part of orchestras. Eager to exploit the growing demand for cymbals, Avedis’s descendant, Avedis II, sailed to Europe. There, he displayed his gleaming cymbals at world exhibitions, winning medals in Paris and London for quality and craftsmanship. By the early 1900s, Zildjian was exporting cymbals to Europe and America, where drummers were impressed with their fine, clear sound and unusual strength. In 1909, Avedis II’s grandson, Avedis Zildjian III, immigrated to the United States to escape political unrest in his homeland. He was nineteen

Then Avedis had an idea. Why not move the cymbal company to America? He and his family could make cymbals and stay in the United States. Aram agreed to the plan. He journeyed to America to teach his nephew the ancient family secrets of cymbal smithing. Together, Avedis and Aram opened a cymbal-making factory outside Boston in a small, one-story building with a dirt floor. The factory was near the ocean so that the cymbals could be tempered, or cooled, with seawater, as they had been in Constantinople. Aram wanted the new factory to resemble the one in Turkey in every way possible. Aram and Avedis named their new enterprise the Avedis Zildjian Company. Over the next year, Aram taught Avedis all he knew. Avedis memorized the secret formula for mixing the copper, tin, and traces of silver. He learned the family’s system for melting the metals into a red-hot pancake in the factory’s enormous furnace. He learned how the metal pancake was beaten flat with hammers until the pancake turned into a thin, dark-gray disk. Avedis watched how the cup was stamped into the center by machine, and how the disk went back into the oven, this time to sweeten the cymbal’s tone. He saw how the cymbal was again hammered and its edges trimmed, and how it was then put away to rest for two weeks, a process called seasoning. Then he learned how to test the cymbal to make sure it was the finest it could be. From start to finish, each handcrafted cymbal took a month to make. Opening the new factory was a risky move. In America, there were plenty of drummers using cymbals. They played in symphony orchestras and marching bands, they accompanied vaudeville stage shows and silent movies. But the cymbals they preferred to use were Turkish Zildjians—other family members had reopened the Constantinople factory that Aram had shut down—or fancy cymbals from China. American-made cymbals at the time were of low quality. Not many drummers in the United States wanted another American-made cymbal, even if it had the name Zildjian on it. To make matters worse, the Great Depression hit only months after Avedis opened the factory in 1929. Now, people were more concerned with feeding their families than going to vaudeville shows, movies, and concerts. And fewer drummers could afford cymbals—even if they wanted them. But Avedis didn’t give up. He worked hard alongside his few employees in

every part of the business. He traveled to large cities, meeting with professional drummers and asking them what they wanted in a cymbal. In New York City, he visited the nightclubs of Harlem, staying up all night talking with jazz drummers. Avedis was a good listener. His drummer friends told him what they liked and disliked about the equipment they used. While in New York, Avedis met Gene Krupa, drummer for the Benny Goodman Orchestra. The group, led by clarinetist Goodman, was one of the earliest swing bands and among the first to showcase its drummer. Unlike orchestral or military drummers, jazz percussionists played on sets of drums, usually while seated. They used cymbals mounted on stands. Krupa was a wildly entertaining musician, full of rhythmic energy and crowd-pleasing tricks like twirling his drumsticks. Jazz drummers at that time used traditional marching cymbals, which were big and bulky. One day, Krupa asked Avedis to develop a thinner cymbal, one that would be easier to play, react more quickly, and make its crashing sound faster than a traditional cymbal. Avedis did as Krupa asked, naming his new cymbal the Paper Thin. It was a runaway success; orders poured into Avedis’s factory. Now many American drummers demanded American-made Zildjian cymbals.

As Avedis continued to develop close relationships with drummers, he saw that his friends needed different types of cymbals to make different types of sounds. So he developed a line of special-purpose cymbals. Each could be used in a different way. The hi-hat, for instance, was paired with another on a pedal-operated stand. The cymbals could be closed for playing lighter, more definite sounds. They could be opened for bigger, louder sounds. Or the drummer could alternate open and closed to play interesting patterns. Soon, the top drummers of the day were visiting the Zildjian factory in Boston. They would meet with Avedis, who would help them select the right cymbals. Some of the most famous songs of the swing era were

recorded with Zildjian cymbals, such as Tommy Dorsey’s “Marie,” with Davey Tough on drums; Benny Goodman’s “Sing, Sing, Sing,” with Gene Krupa; and Don Redman’s “Stormy Weather,” with “Big” Sid Catlett. Avedis and Sally’s oldest son, Armand, was very excited to meet the famous drummers. He talked to them, saw them play, and watched them test the cymbals. As Avedis’s oldest son, Armand knew the secret Zildjian family cymbal-making process by the time he was fourteen. During World War II, metals were rationed. Most metal went to making airplanes, tanks, and weapons. The U.S. government allowed the Zildjian company only small amounts of copper and tin. It wasn’t enough to make cymbals for sale. But instead of closing down the factory, Avedis made cymbals for the Army, Navy, and Marine Corps marching bands. He made cymbals for the British military, too. As an American citizen, Avedis was proud to help his country in the war effort.

While Avedis’s sons were off fighting in the war, he finally wrote down the family’s secret cymbal-making process. It was the first time that had been done. He put one copy of the formula in the company vault and another in his home in case his sons didn’t return. When the war was over, Avedis’s sons did come home. Avedis gave responsibility for the manufacturing side of the business to Armand, the most musical of all the Zildjians. Following his father’s lead, Armand developed friendships with top drummers of modern jazz of the 1950s, such as Max Roach, Shelly Manne, and Roy Haynes. Like his father before him, Armand introduced different types of cymbals, expanding Zildjian’s product line and reputation as the world’s finest cymbal manufacturer. When a new British rock band, the Beatles, appeared on American television in 1964, its drummer, Ringo Starr, played Zildjian cymbals. Demand exploded. Zildjian ended the year with back orders for more than ninety thousand cymbals. As rock music evolved and developed, so did the Zildjian cymbal design. Larger, heavier cymbals with deeper cups allowed rock drummers to be heard over the amplified guitars and vocals. In 1977, Avedis named Armand president of the company. Avedis died two years later, but the Avedis Zildjian Company continued to grow, operating on its founder’s beliefs of developing personal relationships with customers, pioneering important new products, and making the finest cymbals possible. Today, Craigie Zildjian, Armand’s daughter and Avedis’s granddaughter, runs the Avedis Zildjian Company. Avedis asked her to join in 1976, breaking the three-hundred-fifty-year-old tradition of males only in the upper ranks at Zildjian. Despite the many changes in cymbal-making technology, cymbal design, and company leadership, one thing has remained the same over the centuries at Zildjian: the unique sound of its cymbals. As Armand, who passed away in 2002, once said, “A Zildjian cymbal just zings.”