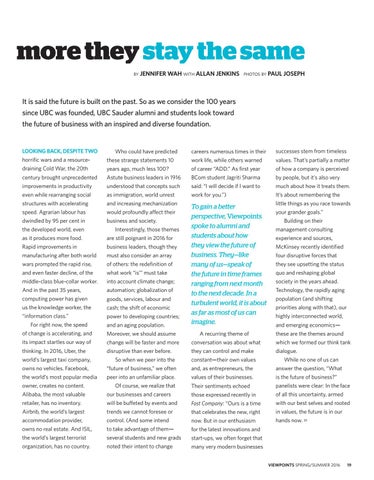 more they stay the same by

It is said the future is built on the past. So as we consider the 100 years since UBC was founded, UBC Sauder alumni and students look toward the future of business with an inspired and diverse foundation.

LOOKING BACK, DESPITE TWO

Who could have predicted

careers numerous times in their

horrific wars and a resource-

work life, while others warned

of career “ADD.” As first year

of how a company is perceived

by people, but it’s also very

understood that concepts such

said: “I will decide if I want to

much about how it treats them.

even while rearranging social

It’s about remembering the

would profoundly affect their

dwindled by 95 per cent in

the developed world, even

as it produces more food.

are still poignant in 2016 for

business leaders, though they

manufacturing after both world

must also consider an array

of others: the redefinition of

and even faster decline, of the

what work “is’” must take

computing power has given

us the knowledge worker, the

cash; the shift of economic

For right now, the speed

and an aging population.

To gain a better perspective, Viewpoints spoke to alumni and students about how they view the future of business. They—like many of us—speak of the future in time frames ranging from next month to the next decade. In a turbulent world, it is about as far as most of us can imagine.

little things as you race towards your grander goals.” Building on their management consulting experience and sources, McKinsey recently identified four disruptive forces that they see upsetting the status quo and reshaping global society in the years ahead. Technology, the rapidly aging population (and shifting priorities along with that), our highly interconnected world, and emerging economics—

of change is accelerating, and

Moreover, we should assume

A recurring theme of

its impact startles our way of

change will be faster and more

conversation was about what

which we formed our think tank

disruptive than ever before.

they can control and make

So when we peer into the

these are the themes around

While no one of us can

“future of business,” we often

and, as entrepreneurs, the

answer the question, “What

the world’s most popular media

peer into an unfamiliar place.

values of their businesses.

is the future of business?”

panelists were clear: In the face

Alibaba, the most valuable

our businesses and careers

those expressed recently in

of all this uncertainty, armed

retailer, has no inventory.

will be buffeted by events and

Fast Company: “Ours is a time

with our best selves and rooted

trends we cannot foresee or

that celebrates the new, right

control. (And some intend

now. But in our enthusiasm

in values, the future is in our hands now. &gt;&gt;

owns no real estate. And ISIL,

to take advantage of them—

for the latest innovations and

start-ups, we often forget that

organization, has no country.

noted their intent to change

Of course, we realize that

The Spring/Summer 2016 of Viewpoints, the alumni magazine for Sauder School of Business at UBC. 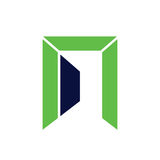