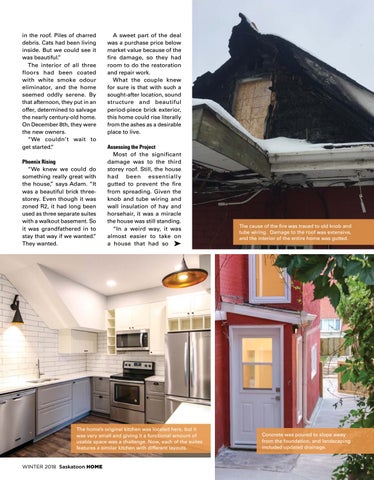 in the roof. Piles of charred debris. Cats had been living inside. But we could see it was beautiful.” The interior of all three floors had been coated with white smoke odour eliminator, and the home seemed oddly serene. By that afternoon, they put in an offer, determined to salvage the nearly century-old home. On December 8th, they were the new owners. “We couldn’t wait to get started.” Phoenix Rising “We knew we could do something really great with the house,” says Adam. “It was a beautiful brick threestorey. Even though it was zoned R2, it had long been used as three separate suites with a walkout basement. So it was grandfathered in to stay that way if we wanted.” They wanted.

A sweet part of the deal was a purchase price below market value because of the fire damage, so they had room to do the restoration and repair work. What the couple knew for sure is that with such a sought-after location, sound structure and beautiful period-piece brick exterior, this home could rise literally from the ashes as a desirable place to live. Assessing the Project Most of the significant damage was to the third storey roof. Still, the house had been essentially gutted to prevent the fire from spreading. Given the knob and tube wiring and wall insulation of hay and horsehair, it was a miracle the house was still standing. “In a weird way, it was almost easier to take on a house that had so

The home’s original kitchen was located here, but it was very small and giving it a functional amount of usable space was a challenge. Now, each of the suites features a similar kitchen with different layouts.

The cause of the fire was traced to old knob and tube wiring. Damage to the roof was extensive, and the interior of the entire home was gutted.

Concrete was poured to slope away from the foundation, and landscaping included updated drainage.