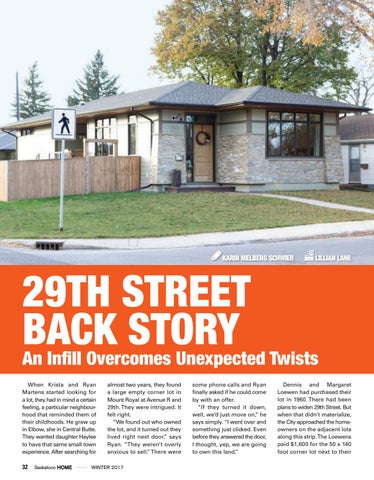 29TH STREET BACK STORY An Infill Overcomes Unexpected Twists When Krista and Ryan Martens started looking for a lot, they had in mind a certain feeling, a particular neighbourhood that reminded them of their childhoods. He grew up in Elbow, she in Central Butte. They wanted daughter Haylee to have that same small town experience. After searching for

almost two years, they found a large empty corner lot in Mount Royal at Avenue R and 29th. They were intrigued. It felt right. “We found out who owned the lot, and it turned out they lived right next door,” says Ryan. “They weren’t overly anxious to sell.” There were

some phone calls and Ryan finally asked if he could come by with an offer. “If they turned it down, well, we’d just move on,” he says simply. “I went over and something just clicked. Even before they answered the door, I thought, yep, we are going to own this land.”

Dennis and Margaret Loewen had purchased their lot in 1960. There had been plans to widen 29th Street. But when that didn’t materialize, the City approached the homeowners on the adjacent lots along this strip. The Loewens paid $1,600 for the 50 x 140 foot corner lot next to their