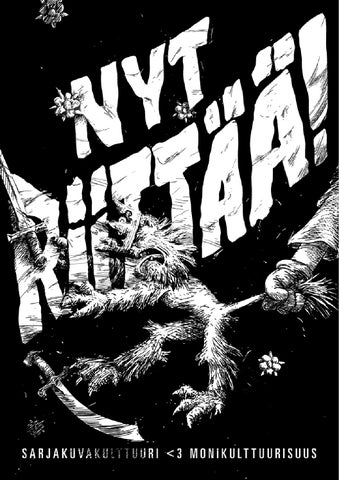 ome weeks ago, I was angry, horrified and fed up with the most recent refugee attacks. I reached out to Kalle Hakkola and suggested we organise a antiracist/multiculturalist zine workshop for the Helsinki Book Fair, to show that the Finnish comics community is united against these dipshits. Kalle had a ton of his own ideas and brought along Tuomas Tiainen. We contacted our dear compatriots in the comics community and the response we got was astounding. So, we will make a 40 page A5 zine at the Helsinki Book Fair. It will be called “Nyt riittää! – Sarjakuvakulttuuri &lt;3 monikulttuurisuus” We were joined by a group of extremely talented people. People such as Pertti Jarla, Milla Paloniemi, Emmi Nieminen, Warda Ahmed, Kivi Larmola, Emmi Valve, Petri Hiltunen, to name a few. There were also artists who delivered their submissions in advance. Brlliant people like Aino Sutinen, Matti Hagelberg, Kaisa Leka, Olli Hietala, JP Ahonen, Aapo Kukko and Ville Pirinen. Being a foreigner in Finland can be a fantastic thing. The country is filled up with clever, talented and kind people, unmoved by fear mongering. The artists participating is a proof of just that. A lot of focus has been given the loud minority focusing on division and fear. They make a lot of noise. Let´s see the ordinary folks make some noise too. Karstein Volle

Verna Kuutti • 4 Tough situation. / Help, friend! 5 I’d like to help, but we do these problems of our own. 6 The boat, bought on credit, is on its last legs. 7 Can’t be pulling just any pirate up! 8 Funny thing, by the way, that it’s always young men asking for help. / Where are the women and children? 9 Call help with your smart phones! 10 Wait, I have a Form for acceptance to the boat here somewhere. 11 Part 1: Quote the first four lines of Runeberg’s ”Hirvenhiihtäjät”. / Part 2: The favourite dish of president Kekkonen? 12 Here’s a Minigrip™ bag of out meal for you to taste. / How many stars, 1–5?

Jussi SeppĂ¤nen &amp; Teppo Manninen â&amp;#x20AC;˘ 1 Demonstrations are disgusting! 2 Like a performance, where likeminded try to affect each other. / You are right! 3 Bystanders are being disturbed.

1 The selfish thought of grownups, that their opinion matters. / Me! Me! I can explain so that you too will understand! 2 Everything is coronated by the chain of misinterpretion. 3 Big masses simply canâ&amp;#x20AC;&amp;#x2122;t agree. / Imprison racists! / Oh, no, not really, no! 4 Media makes their own interpretations. / According to the police there was 500 unemployed present.

Roope Eronen: Racism Contest â&amp;#x20AC;˘ A racism contest was invented this year in Slush. / For it would be stupid not to exploit this inexhaustible Finnish natural resource. / The biggest racist wins! / A cut from the state budget is just one phone call away... / Revenues are directed to companies uncut. / Voters are waiting eagerly for the competition.

Warda Ahmed â&amp;#x20AC;˘ 1 You must have been brave to have been able to draw despite your culture? 2 Oh... Quite the contrary. My community is a power source and digs what I do. / Um... Are you sure? 3 I&#39;m not so sure about this interview... / Good! I have enough material now. The photographer will call you then! Bye! 4 Hello. I will come tomorrow for the photographs. You work at the Comics Center? / Yes. / You have the scarf... 5 Uh...?! Take some of your comics with you so we get a nice contrast when you draw. / What? Contrast? / What the F%&amp;*? / Yeah! 6 Listen. / Can we call this interview off? / You do understand that it is no use for you to ask support from this magazine in the future if you cancel, don&#39;t you? For the sake of your caree... / Okay. A nice day for you, too.

1. Everything we did for the promotion of Finland... lost! 2. The attitude of foreign investors towards Finland and Finnish people is getting sour already. / But that is sheer racism! 3.We have to accept the reality and pursue a new vision based on facts. We’re going to promote Finland as a nazi-friendly investment and tourism target. 4. We’re gonna build fences around refugee centers, and watchtowers,from where the yard can be observed by fascistourists clad in SS-uniforms. (Garments not included in the price) 5. The unemployed, who’ll be forcifully recruited as “kapos”, shall unleash their bitterness and frustration onto the inhabitants... 6....which will provide free entertainment for the visitors./ “Cheap holiday in New Belsen!” Otso Höglund

Pertti Jarla: For: / Against: • 1 Refugees can revitalize municipality’s economy. 2 In Kihniö, Isis blew up a thousand christians. / True or not, it’s a good view on the situation. 3 Our duty as a nation is to help those suffering from humanitarian crises. 4 Kick some Somali ass, goddammit! 5 The refugees have not, uh, weakened the security, uh, situation of our municipality. 6 [Refugee Center] 7 Oh oh, there you go, strong argumentation for and against. What do you think? 8 Next week: The Big Pedophile Discussion

Apila Pepita: How to deal with racism? Tips for the main population (based on Koko Hubara’s blog) • 1 Don’t go too easy on yourself! [Do something concrete] 2 Keep your eyes open! / Keep an eye on situations / When the situation clears, tell the victim: / You are valuable as a human being. I will keep on supporting you! 3 Always intervene / Hey! 4 and transfer your courage to the next generation! 5 Make use of your privileges! / As a representative of the main population you are not a target of racism, / so you can support those who are harmed by racism! 6 Think of whom you vote for!

Kivi Larmola • 1 I&#39;m scared of all this fear, fear of the smallest, rarest, weakest, and different. / Xenophobia, racism. The fear of different is everywhere where the majorities are alike, accustomed to each other. 2 That doesn&#39;t make it any more acceptable. 3 We have all come here from the direction of Zanzibar, Malawi, or thereabouts. 4 That&#39;s where the ”Eve part” of our DNA is from, the part we all share. 5 Humankind should stick together! There is 7 billion of us. Compared to fungi and bacteria we are a puny minority. 6 Are they afraid of us, too?

Emmi Valve: ...but what if you are NOT afraid? â&amp;#x20AC;˘ Fear not, o Aryan maiden! We shall protect the Finnish vagina thou possesseth! / Your maidenhood is safe with us!

Ummyeahrright. It just happens to be MY vagina. And that guy is... what is that supposed to be? Something out of a MV magazine horror story? / I’m not afraid. / But don’t you realize he’ll RAPE you, you whore! / Only WE can rescue you! / WON’T YOU REALIZE YOU OUGHT TO BE AFRAID, YOU DUMB BITCH!!

If you are not afraid, then he’ll rape someone else! Like a three-year-old! A group buttfuck! Up the butt of a little child! And it’ll be YOUR fault! / I fucking hope you’ll be raped! That some NIGGER’ll do it, and not some domestic rapist, we don’t care about those! / (Not that anyone’d really like to fuck you anyway!) / [Thanks for the fod!] / I’m getting sick of this stupid pedestal now! 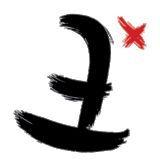