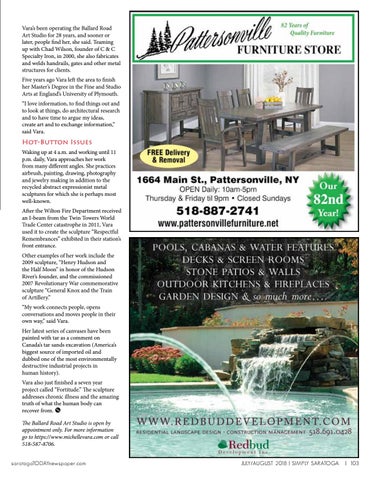 Vara’s been operating the Ballard Road Art Studio for 28 years, and sooner or later, people find her, she said. Teaming up with Chad Wilson, founder of C & C Specialty Iron, in 2000, she also fabricates and welds handrails, gates and other metal structures for clients. Five years ago Vara left the area to finish her Master’s Degree in the Fine and Studio Arts at England’s University of Plymouth. “I love information, to find things out and to look at things, do architectural research and to have time to argue my ideas, create art and to exchange information,” said Vara.

Hot-Button Issues Waking up at 4 a.m. and working until 11 p.m. daily, Vara approaches her work from many different angles. She practices airbrush, painting, drawing, photography and jewelry making in addition to the recycled abstract expressionist metal sculptures for which she is perhaps most well-known. After the Wilton Fire Department received an I-beam from the Twin Towers World Trade Center catastrophe in 2011, Vara used it to create the sculpture “Respectful Remembrances” exhibited in their station’s front entrance. Other examples of her work include the 2009 sculpture, “Henry Hudson and the Half Moon” in honor of the Hudson River’s founder, and the commissioned 2007 Revolutionary War commemorative sculpture “General Knox and the Train of Artillery.” “My work connects people, opens conversations and moves people in their own way,” said Vara. Her latest series of canvases have been painted with tar as a comment on Canada’s tar sands excavation (America’s biggest source of imported oil and dubbed one of the most environmentally destructive industrial projects in human history). Vara also just finished a seven year project called “Fortitude.” The sculpture addresses chronic illness and the amazing truth of what the human body can recover from. SS The Ballard Road Art Studio is open by appointment only. For more information go to https://www.michellevara.com or call 518-587-8706. saratogaTODAYnewspaper.com

The Saratoga TODAY magazine - Simply Saratoga, brings you everything you need for your Saratoga vacation! We cover The Track, Polo, and SPAC...

The Saratoga TODAY magazine - Simply Saratoga, brings you everything you need for your Saratoga vacation! We cover The Track, Polo, and SPAC...