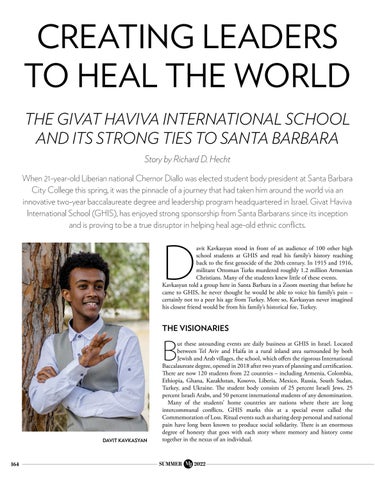 CREATING LEADERS TO HEAL THE WORLD THE GIVAT HAVIVA INTERNATIONAL SCHOOL AND ITS STRONG TIES TO SANTA BARBARA Story by Richard D. Hecht When 21-year-old Liberian national Chernor Diallo was elected student body president at Santa Barbara City College this spring, it was the pinnacle of a journey that had taken him around the world via an innovative two-year baccalaureate degree and leadership program headquartered in Israel. Givat Haviva International School (GHIS), has enjoyed strong sponsorship from Santa Barbarans since its inception and is proving to be a true disruptor in helping heal age-old ethnic conflicts.

avit Kavkasyan stood in front of an audience of 100 other high school students at GHIS and read his family’s history reaching back to the first genocide of the 20th century. In 1915 and 1916, militant Ottoman Turks murdered roughly 1.2 million Armenian Christians. Many of the students knew little of these events. Kavkasyan told a group here in Santa Barbara in a Zoom meeting that before he came to GHIS, he never thought he would be able to voice his family’s pain – certainly not to a peer his age from Turkey. More so, Kavkasyan never imagined his closest friend would be from his family’s historical foe, Turkey.

ut these astounding events are daily business at GHIS in Israel. Located between Tel Aviv and Haifa in a rural inland area surrounded by both Jewish and Arab villages, the school, which offers the rigorous International Baccalaureate degree, opened in 2018 after two years of planning and certification. There are now 120 students from 22 countries – including Armenia, Colombia, Ethiopia, Ghana, Kazakhstan, Kosovo, Liberia, Mexico, Russia, South Sudan, Turkey, and Ukraine. The student body consists of 25 percent Israeli Jews, 25 percent Israeli Arabs, and 50 percent international students of any denomination. Many of the students’ home countries are nations where there are long intercommunal conflicts. GHIS marks this at a special event called the Commemoration of Loss. Ritual events such as sharing deep personal and national pain have long been known to produce social solidarity. There is an enormous degree of honesty that goes with each story where memory and history come together in the nexus of an individual.