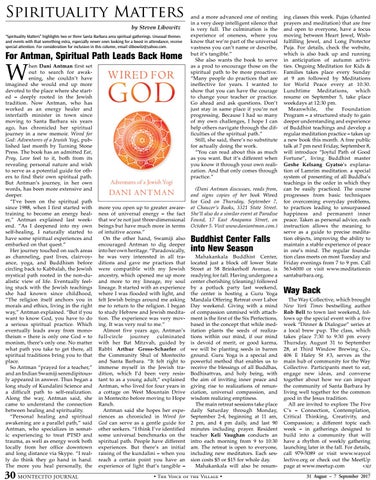 Spirituality Matters by Steven Libowitz “Spirituality Matters” highlights two or three Santa Barbara area spiritual gatherings. Unusual themes and events with that something extra, especially newer ones looking for a boost in attendance, receive special attention. For consideration for inclusion in this column, email slibowitz@yahoo.com.

hen Dani Antman first set out to search for awakening, she couldn’t have imagined she would end up more devoted to the place where she started – deeply rooted in the Jewish tradition. Now Antman, who has worked as an energy healer and interfaith minister in town since moving to Santa Barbara six years ago, has chronicled her spiritual journey in a new memoir. Wired for God: Adventures of a Jewish Yogi, published last month by Turning Stone Press. The book has an admitted Eat, Pray, Love feel to it, both from its revealing personal nature and wish to serve as a potential guide for others to find their own spiritual path. But Antman’s journey, in her own words, has been more extensive and deeper. “I’ve been on the spiritual path since 1988, when I first started with training to become an energy healer,” Antman explained last weekend. “As I deepened into my own self-healing, I naturally started to have some spiritual experiences and embarked on that quest.” Her journey touched on such areas as channeling, past lives, clairvoyance, yoga, and Buddhism before circling back to Kabbalah, the Jewish mystical path rooted in the non-dualistic view of life. Eventually feeling stuck with the Jewish teachings she had known since childhood, “The religion itself anchors you in morals and ethics, living in the right way,” Antman explained. “But if you want to know God, you have to do a serious spiritual practice. Which eventually leads away from monotheism – there is only one God – to monism, there’s only one. No matter what path you take to get there, all spiritual traditions bring you to that place. So Antman “prayed for a teacher,” and an Indian Swamiji serendipitously appeared in answer. Thus began a long study of Kundalini Science and a difficult path to self-realization. Along the way, Antman said, she came to understand the connection between healing and spirituality. “Personal healing and spiritual awakening are a parallel path,” said Antman, who specializes in somatic experiencing to treat PTSD and trauma, as well as energy work both locally from her office downtown and long distance via Skype. “I really do think they go hand in hand. The more you heal personally, the

more you open up to greater awareness of universal energy – the fact that we’re not just three-dimensional beings but have much more in terms of intuitive access.” On the other hand, Swamiji also encouraged Antman to dig deeper into her own heritage. “Paradoxically, he was very interested in all traditions and gave me practices that were compatible with my Jewish ancestry, which opened me up more and more to my lineage, my soul lineage. It started with an experience where I was flooded with light, and felt Jewish beings around me asking me to return to the religion. I began to study Hebrew and Jewish meditation. The experience was very moving. It was very real to me.” Almost five years ago, Antman’s full-circle journey culminated with her Bat Mitzvah, guided by Rabbi Arthur Gross-Schaefer of the Community Shul of Montecito and Santa Barbara. “It felt right to immerse myself in the Jewish tradition, which I’d been very resistant to as a young adult,” explained Antman, who lived for four years in a cottage on West Mountain Drive in Montecito before moving to Hope Ranch. Antman said she hopes her experiences as chronicled in Wired for God can serve as a gentle guide for other seekers. “I think I’ve identified some universal benchmarks on the spiritual path. People have different experiences. But there’s an initial raising of the kundalini – when you reach a certain point you have an experience of light that’s tangible –

and a more advanced one of resting in a very deep intelligent silence that is very full. The culmination is the experience of oneness, where you know that we’re part of the universal vastness you can’t name or describe, but it’s tangible.” She also wants the book to serve as a prod to encourage those on the spiritual path to be more proactive. “Many people do practices that are ineffective for years. I wanted to show that you can have the courage to change your teacher or practice. Go ahead and ask questions. Don’t just stay in same place if you’re not progressing. Because I had so many of my own challenges, I hope I can help others navigate through the difficulties of the spiritual path.” Still, she said, there’s no substitute for actually doing the work. “You can read about this as much as you want. But it’s different when you know it through your own realization. And that only comes through practice.” (Dani Antman discusses, reads from, and signs copies of her book Wired for God on Thursday, September 7, at Chaucer’s Books, 3321 State Street. She’ll also do a similar event at Paradise Found, 17 East Anapamu Street, on October 5. Visit www.daniantman.com.)

Mahakankala Buddhist Center, located just a block off lower State Street at 58 Brinkerhoff Avenue, is readying for fall. Having undergone a center cherishing (cleaning) followed by a potluck party last weekend, the center is hosting a Guru Yoga Mandala Offering Retreat over Labor Day weekend. Giving with a mind of compassion unmixed with attachment is the first of the Six Perfections, based in the concept that while meditation plants the seeds of realizations within our mind, if our mind is devoid of merit, or good karma, we will be planting seeds in barren ground. Guru Yoga is a special and powerful method that enables us to receive the blessings of all Buddhas, Bodhisattvas, and holy being, with the aim of inviting inner peace and giving rise to realizations of renunciation, universal compassion, and wisdom realizing emptiness. The main retreat sessions take place daily Saturday through Monday, September 2-4, beginning at 11 am, 2 pm, and 4 pm daily, and last 90 minutes including prayer. Resident teacher Keli Vaughan conducts an intro each morning from 9 to 10:30 am. The retreat is open to everyone, including new meditators. Each session costs $5 or $15 for whole day. Mahakankala will also be resum-

ing classes this week. Pujas (chanted prayers and meditation) that are free and open to everyone, have a focus moving between Heart Jewel, Wishfulfilling Jewel, and Long Protector Puja. For details, check the website, which is also back up and running in anticipation of autumn activities. Ongoing Meditation for Kids &amp; Families takes place every Sunday at 9 am followed by Meditations for World Peace every at 10:30. Lunchtime Meditations, which resume on September 5, take place weekdays at 12:30 pm. Meanwhile, the Foundation Program – a structured study to gain deeper understanding and experience of Buddhist teachings and develop a regular meditation practice – takes up a new book this month. A free public talk at 7 pm next Friday, September 8, will introduce “Joyful Path of Good Fortune”, living Buddhist master Geshe Kelsang Gyatso’s explanation of Lamrim meditation. a special system of presenting of all Buddha’s teachings in the order in which they can be easily practiced. The course progresses from basic techniques for overcoming everyday problems, to practices leading to unsurpassed happiness and permanent inner peace. Taken as personal advice, each instruction allows the meaning to serve as a guide to precise meditation objects, improving the ability to maintain a stable experience of peace in one’s mind. The regular foundation class meets on most Tuesday and Friday evenings from 7 to 9 pm. Call 563-6000 or visit www.meditationin santabarbara.org.

The Way Collective, which brought New York Times bestselling author Rob Bell to town last weekend, follows up the special event with a five week “Dinner &amp; Dialogue” series at a local brew pup. The class, which takes place 7:30 to 9:30 pm every Thursday, August 31 to September 28, at Third Window Brewing Co., 406 E Haley St #3, serves as the main hub of community for the Way Collective. Participants meet to eat, engage new ideas, and converse together about how we can impact the community of Santa Barbara by living well together for the common good in the Jesus tradition. All are invited to explore The Five C’s – Connection, Contemplation, Critical Thinking, Creativity, and Compassion; a different topic each week – in gatherings designed to build into a community that will have a rhythm of weekly gathering launching later in the fall. For details, call 979-5089 or visit www.waycol lective.org or check out the MeetUp page at www.meetup.com •MJ 31 August – 7 September 2017