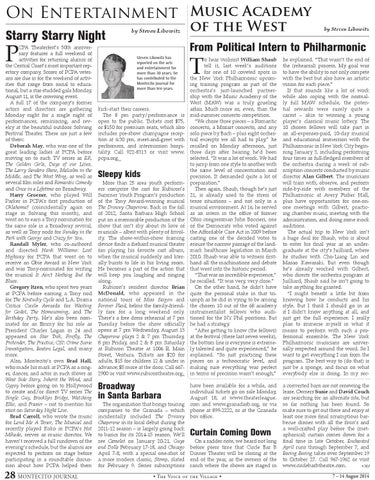 CPA Theaterfest’s 50th anniversary features a full weekend of activities for returning alumni of the Central Coast’s most important repertory company. Scores of PCPA veterans are due in for the weekend of activities that range from social to educational, but a star-studded gala Monday, August 11, is the crowning event. A full 17 of the company’s former actors and directors are gathering Monday night for a single night of performances, reminiscing, and revelry at the beautiful outdoor Solvang Festival Theater. These are just a few of them: Deborah May, who was one of the great leading ladies at PCPA before moving on to such TV series as ER, The Golden Girls, Days of our Lives, The Larry Sanders Show, Malcolm in the Middle, and The West Wing, as well as several film roles and Romantic Comedy and Once in a Lifetime on Broadway. Harry Groener, who played Will Parker in PCPA’s first production of Oklahoma! (coincidentally again on stage in Solvang this month), and went on to earn a Tony nomination for the same role in a Broadway revival, as well as Tony nods for Sunday in the Park with George and Crazy for You. Randall Myler, who co-authored and directed Hank Williams: Lost Highway for PCPA that went on to receive an Obie Award in New York and was Tony-nominated for writing the musical It Ain’t Nothing But the Blues. Gregory Itzen, who spent two years at PCPA before earning a Tony nod for The Kentucky Cycle and L.A. Drama Critics Circle Awards for Waiting for Godot, The Homecoming, and The Birthday Party. He’s also been nominated for an Emmy for his role as President Charles Logan in 24 and appeared on Star Trek, Firefly, The Pretender, The Practice, CSI: Crime Scene Investigation, Boston Legal, and many more. Also, Montecito’s own Brad Hall, who made his mark at PCPA as a singer, dancer, and actor in such shows as West Side Story, Inherit the Wind, and Gypsy before going on to Hollywood to create and/or direct TV series The Single Guy, Brooklyn Bridge, Watching Ellie, and Frasier – not to mention his stint on Saturday Night Live. Brad Carroll, who wrote the music for Lend Me A Tenor, The Musical and recently played Koko in PCPA’s Hot Mikado, serves as music director. We haven’t received a full rundown of the evening’s schedule, but the alumni are expected to perform on stage before participating in a roundtable discussion about how PCPA helped them

From Political Intern to Philharmonic Steven Libowitz has reported on the arts and entertainment for more than 30 years; he has contributed to the Montecito Journal for more than ten years.

kick-start their careers. The 8 pm party/performance is open to the public. Tickets cost $75, or $150 for premium seats, which also includes pre-show champagne reception at 6:30 pm, meet-and-greet with performers, and intermission hospitality. Call 922-8313 or visit www. pcpa.org.

More than 25 area youth performers comprise the cast for Rubicon’s Summer Youth Program’s production of the Tony Award-winning musical The Drowsy Chaperone. Back in the fall of 2012, Santa Barbara High School put on a memorable production of the show that isn’t shy about its love of musicals – albeit with plenty of frivolity. The show-within-show framing device finds a diehard musical theater fan playing his favorite cast album, when the musical suddenly and literally bursts to life in his living room. He becomes a part of the action that will keep you laughing and singing along. Rubicon’s resident director Brian McDonald, who appeared in the national tours of Miss Saigon and Forever Plaid, helms the family-friendly fare for a long weekend only. There’s a free dress rehearsal at 7 pm Tuesday before the show officially opens at 7 pm Wednesday, August 13 Chaperone plays 2 & 7 pm Thursday, 8 pm Friday, and 2 & 8 pm Saturday at Rubicon Theatre at 1006 E. Main Street, Ventura. Tickets are $20 for adults, $15 for children 12 & under in advance; $5 more at the door. Call 6672900 or visit www.rubicontheatre.org.

The organization that brings touring companies to the Granada – which incidentally included The Drowsy Chaperone in its local debut during the 2011-12 season – is largely going back to basics for its 2014-15 season. We’ll see Camelot on January 20-21, Guys and Dolls February 17-18, and Chicago April 7-8, with a special one-shot of a more modern classic, Stomp, slated for February 9. Series subscriptions

o hear violinist William Shaub tell it, last week’s auditions for one of 10 coveted spots in the New York Philharmonic upcoming training program as part of the orchestra’s just-launched partnership with the Music Academy of the West (MAW) was a truly grueling affair. Much more so, even, than the mid-summer concerto competition. “We chose three pieces – a Romantic concerto, a Mozart concerto, and any solo piece by Bach – plus eight orchestral excerpts we all had to play,” he recalled on Monday afternoon, just three days after hearing he’d been selected. “It was a lot of work. We had to jump from one style to another with the same level of concentration and precision. It demanded quite a lot of preparation.” Then again, Shaub, though he’s just 21, is already used to the stress of tense situations – and not only in a musical environment. At 16, he served as an intern in the office of former Ohio congressman John Boccieri, one of the Democrats who voted against the Affordable Care Act in 2009 before casting one of the decided votes to ensure the narrow passage of the landmark healthcare legislation in March 2010. Shaub was able to witness firsthand all the machinations and debate that went into the historic period. “That was an incredible experience,” he recalled. “It was very, very close.” On the other hand, he didn’t have quite the personal stake in that triumph as he did in vying to be among the chosen 10 out of the 68 academy instrumentalist fellows who auditioned for the NY Phil positions. But he had a strategy. “After getting to know (the fellows) at the festival (these last seven weeks), the bottom line is everyone is extremely talented and quite experienced,” he explained. “So just practicing these pieces on a technocratic level, and making sure everything was perfect in terms of precision wasn’t enough,”

he explained. “That wasn’t the end of the (rehearsal) process. My goal was to have the ability to not only compete with the best but also have an artistic vision for each piece.” If that sounds like a lot of work while also coping with the normally full MAW schedule, the potential rewards were surely quite a carrot – akin to winning a young player’s classical music lottery. The 10 chosen fellows will take part in an all-expenses-paid, 10-day musical and educational immersion with the Philharmonic in New York City beginning January 3, including performing four times as full-fledged members of the orchestra during a week of subscription concerts conducted by music director Alan Gilbert. The musicians will train with, observe, and perform side-by-side with members of the Philharmonic at Avery Fisher Hall, plus have opportunities for one-onone meetings with Gilbert, practicing chamber music, meeting with the administration, and doing some mock auditions. The actual trip to New York isn’t a huge deal for Shaub, who is about to enter his final year as an undergraduate at the city’s Juilliard, where he studies with Cho-Liang Lin and Masao Kawasaki. But even though he’s already worked with Gilbert, who directs the orchestra program at Juilliard, Shaub said he isn’t going to take anything for granted. “I might benefit a little bit from knowing how he conducts and his style. But I think I should go in as if I didn’t know anything at all, and just get the full experience. I really plan to immerse myself in what it means to perform with such a professional ensemble. The New York Philharmonic musicians are universally respected around the word. So I want to get everything I can from the program. The best way to (do that) is just be a sponge, and focus on what everybody else is doing. In my sec-

have been available for a while, and individual tickets go on sale Monday, August 18, at www.theaterleague. com and www.granadasb.org, or via phone at 899-2222, or at the Granada box office.

a converted barn are not renewing the lease. Owners Susie and David Couch are searching for an alternate site, but so far nothing has been found. So make sure to get out there and enjoy at least one more final scrumptious barbecue dinner with all the fixin’s and a well-crafted play before the (metaphorical) curtain comes down for a final time in late October. Enchanted April runs through September 7, and Boeing Boeing takes over September 19 to October 27. Call 967-1962 or visit www.circlebarbtheatre.com. •MJ

On a sadder note, we heard not long before press time that Circle Bar B Dinner Theater will be closing at the end of the year, as the owners of the ranch where the shows are staged in

• THE VOICE OF THE VILLAGE •