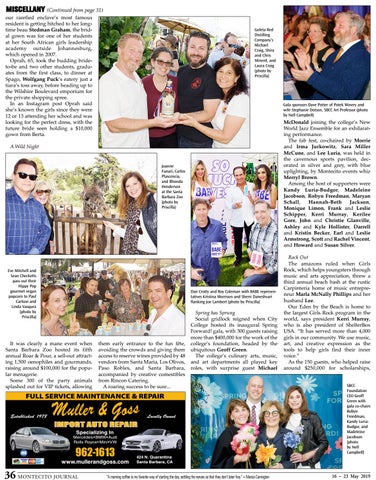 our rarefied enclave’s most famous resident is getting hitched to her longtime beau Stedman Graham, the bridal gown was for one of her students at her South African girls leadership academy outside Johannesburg, which opened in 2007. Oprah, 65, took the budding brideto-be and two other students, graduates from the first class, to dinner at Spago, Wolfgang Puck’s eatery just a tiara’s toss away, before heading up to the Wilshire Boulevard emporium for the private shopping spree. In an Instagram post Oprah said she’s known the girls since they were 12 or 13 attending her school and was looking for the perfect dress, with the future bride seen holding a $10,000 gown from Berta.

It was clearly a mane event when Santa Barbara Zoo hosted its fifth annual Roar &amp; Pour, a sell-out attracting 1,500 oenophiles and gourmands, raising around $100,000 for the popular menagerie. Some 300 of the party animals splashed out for VIP tickets, allowing

them early entrance to the fun fête, avoiding the crowds and giving them access to reserve wines provided by 48 vendors from Santa Maria, Los Olivos, Paso Robles, and Santa Barbara, accompanied by creative comestibles from Rincon Catering. A roaring success to be sure...

Spring has Sprung Social gridlock reigned when City College hosted its inaugural Spring Forward! gala, with 300 guests raising more than $400,000 for the work of the college’s foundation, headed by the ubiquitous Geoff Green. The college’s culinary arts, music, and art departments all played key roles, with surprise guest Michael

“A morning coffee is my favorite way of starting the day, settling the nerves so that they don’t later fray.” – Marcia Carrington

Rock Out The amazons ruled when Girls Rock, which helps youngsters through music and arts appreciation, threw a third annual beach bash at the rustic Carpinteria home of music entrepreneur Marla McNally Phillips and her husband Lee. Our Eden by the Beach is home to the largest Girls Rock program in the world, says president Kerri Murray, who is also president of ShelterBox USA. “It has served more than 4,000 girls in our community. We use music, art, and creative expression as the tools to help girls find their inner voice.” As the 150 guests, who helped raise around $250,000 for scholarships, SBCC Foundation CEO Geoff Green with gala co-chairs Robyn Freedman, Kandy LuriaBudgor, and Madeleine Jacobson (photo by Nell Campbell)