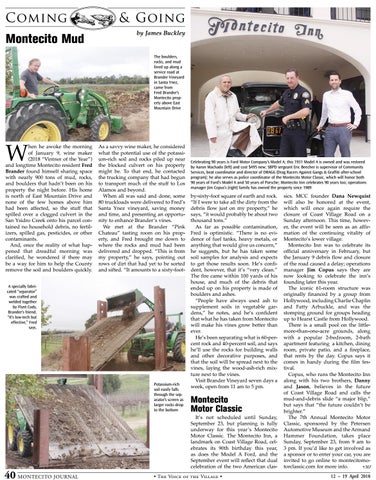 The boulders, rocks, and mud lined up along a service road at Brander Vineyard in Santa Ynez, came from Fred Brander’s Montecito property above East Mountain Drive

hen he awoke the morning of January 9, wine maker (2018 “Vintner of the Year”) and longtime Montecito resident Fred Brander found himself sharing space with nearly 900 tons of mud, rocks, and boulders that hadn’t been on his property the night before. His home is north of East Mountain Drive and none of the few homes above him had been affected, so the stuff that spilled over a clogged culvert in the San Ysidro Creek onto his parcel contained no household debris, no fertilizers, spilled gas, pesticides, or other contaminants. And, once the reality of what happened that dreadful morning was clarified, he wondered if there may be a way for him to help the County remove the soil and boulders quickly.

As a savvy wine maker, he considered what the potential use of the potassium-rich soil and rocks piled up near the blocked culvert on his property might be. To that end, he contacted the trucking company that had begun to transport much of the stuff to Los Alamos and beyond. When all was said and done, some 80 truckloads were delivered to Fred’s Santa Ynez vineyard, saving money and time, and presenting an opportunity to enhance Brander’s vines. We met at the Brander “Pink Chateau” tasting room on his property, and Fred brought me down to where the rocks and mud had been delivered and dropped. “This is from my property,” he says, pointing out rows of dirt that had yet to be sorted and sifted. “It amounts to a sixty-foot-

A specially fabricated “separator” was crafted and welded together by Flynt Cody, Brander’s friend. “It’s low-tech but effective,” Fred says.

Celebrating 90 years is Ford Motor Company’s Model A; this 1931 Model A is owned and was restored by Aaron Machado (left) and cost $495 new; SBPD sergeant Eric Beecher is supervisor of Community Services, beat coordinator and director of DRAGG (Drag Racers Against Gangs &amp; Graffiti after-school program); he also serves as police coordinator of the Montecito Motor Classic, which will honor both 90 years of Ford’s Model A and 50 years of Porsche; Montecito Inn celebrates 90 years too; operations manager Jim Copus’s (right) family has owned the property since 1989

by-sixty-foot square of earth and rock. “If I were to take all the dirty from the debris flow just on my property,” he says, “it would probably be about two thousand tons.” As far as possible contamination, Fred is optimistic. “There is no evidence of fuel tanks, heavy metals, or anything that would give us concern,” he suggests, but he has taken some soil samples for analysis and expects to get those results soon. He’s confident, however, that it’s “very clean.” The fire came within 100 yards of his house, and much of the debris that ended up on his property is made of boulders and ashes. “People have always used ash to supplement soils in vegetable gardens,” he notes, and he’s confident that what he has taken from Montecito will make his vines grow better than ever. He’s been separating what is 60-percent rock and 40-percent soil, and says he’ll use the rocks for building walls and other decorative purposes, and that the soil will be spread next to the vines, laying the wood-ash-rich mixture next to the vines. Visit Brander Vineyard seven days a week, open from 11 am to 5 pm.

It’s not scheduled until Sunday, September 23, but planning is fully underway for this year’s Montecito Motor Classic. The Montecito Inn, a landmark on Coast Village Road, celebrates its 90th birthday this year, as does the Model A Ford, and the September event will reflect that dual celebration of the two American clas• The Voice of the Village •

sics. MCC founder Dana Newquist will also be honored at the event, which will once again require the closure of Coast Village Road on a Sunday afternoon. This time, however, the event will be seen as an affirmation of the continuing vitality of Montecito’s lower village. Montecito Inn was to celebrate its official anniversary in February, but the January 9 debris flow and closure of the road caused a delay; operations manager Jim Copus says they are now looking to celebrate the inn’s founding later this year. The iconic 61-room structure was originally financed by a group from Hollywood, including Charlie Chaplin and Fatty Arbuckle, and was the stomping ground for groups heading up to Hearst Castle from Hollywood. There is a small pool on the littlemore-than-one-acre grounds, along with a popular 2-bedroom, 2-bath apartment featuring a kitchen, dining room, private patio, and a fireplace, that rents by the day. Copus says it comes in handy during the film festival. Copus, who runs the Montecito Inn along with his two brothers, Danny and Jason, believes in the future of Coast Village Road and calls the mud-and-debris slide “a major blip,” but says that “the future couldn’t be brighter.” The 7th Annual Montecito Motor Classic, sponsored by the Petersen Automotive Museum and the Armand Hammer Foundation, takes place Sunday, September 23, from 9 am to 3 pm. If you’d like to get involved as a sponsor or to enter your car, you are invited to go online to montecitomotorclassic.com for more info. •MJ 12 – 19 April 2018