Who is Sean Kenney 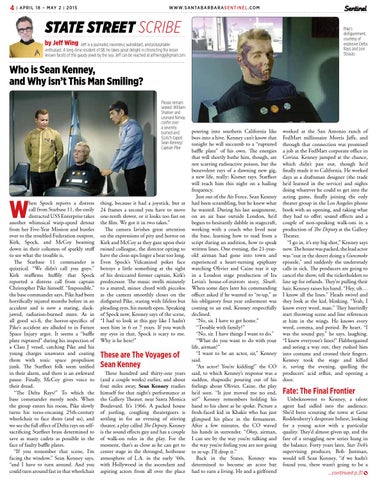 Jeff is a journalist, raconteur, autodidact, and polysyllable enthusiast. A long-time resident of SB, he takes great delight in chronicling the lesser known facets of this gaudy jewel by the sea. Jeff can be reached at jeffwingg@gmail.com

Who is Sean Kenney, and Why isn’t This Man Smiling? Please remain seated: William Shatner and Leonard Nimoy confer over a severely burned and Scotch-taped Sean Kenney/ Captain Pike

hen Spock reports a distress call from Starbase 11, the easily distracted USS Enterprise takes another whimsical warp-speed detour from her Five-Year Mission and hustles over to the troubled Federation outpost, Kirk, Spock, and McCoy beaming down in their columns of sparkly stuff to see what the trouble is. The Starbase 11 commander is quizzical. “We didn’t call you guys.” Kirk reaffirms huffily that Spock reported a distress call from captain Christopher Pike himself. “Impossible,” the base commander says. Pike had been horrifically injured months before in an accident and is now a staring, slackjawed, radiation-burned mute. As in all good sci-fi, the horror-specifics of Pike’s accident are alluded to in Future Space Injury argot. It seems a “baffle plate ruptured” during his inspection of a Class J vessel, catching Pike and his young charges unawares and coating them with toxic space propulsion junk. The Starfleet folk seem unified in their alarm, and there is an awkward pause. Finally, McCoy gives voice to their dread. “The Delta Rays?” To which the base commander merely nods. When the group enters his room, Pike slowly turns his torso-encasing 25th-century wheelchair to face them (and us), and we see the full effect of Delta rays on selfsacrificing Starfleet brass determined to save as many cadets as possible in the face of faulty baffle plates. “If you remember that scene, I’m facing the window,” Sean Kenney says, “and I have to turn around. And you could turn around fast in that wheelchair

thing, because it had a joystick, but at 24 frames a second you have to move one-tenth slower, or it looks too fast on the film. We got it in two takes.” The camera lavishes great attention on the expressions of pity and horror on Kirk and McCoy as they gaze upon their ruined colleague, the director opting to have the close-ups linger a beat too long. Even Spock’s Vulcanized poker face betrays a little something at the sight of his desiccated former captain, Kirk’s predecessor. The music swells minutely to a muted, minor chord with piccolos as the camera smoothly closes on the disfigured Pike, staring with lifeless but pleading eyes, his mouth open. Speaking of Spock now, Kenney says of the scene, “I had to look at this guy like I hadn’t seen him in 6 or 7 years. If you watch my eyes in that, Spock is scary to me. Why is he here?”

These are The Voyages of Sean Kenney

Three hundred and thirty-one years (and a couple weeks) earlier, and about four miles away, Sean Kenney readies himself for that night’s performance at the Gallery Theater, near Santa Monica Boulevard. It’s 1966. A packed house of jostling, coughing theatergoers is settling in for an evening of stirring theater, a play called The Deputy. Kenney is the sound effects guy and has a couple of walk-on roles in the play. For the moment, that’s as close as he can get to center stage in the thronged, hothouse atmosphere of L.A. in the early ‘60s, with Hollywood in the ascendant and aspiring actors from all over the place

pouring into southern California like bees into a hive. Kenney can’t know that tonight he will succumb to a “ruptured baffle plate” of his own. The energies that will shortly bathe him, though, are not scarring radioactive poison, but the benevolent rays of a dawning new gig, a new life, really; Kismet rays. Starfleet will reach him this night on a hailing frequency. Just out of the Air Force, Sean Kenney had been scrambling, but he knew what he wanted. During his last assignment, on an air base outside London, he’d begun to hesitantly dabble in stagecraft, working with a coach who lived near the base, learning how to read from a script during an audition, how to speak written lines. One evening, the 21-yearold airman had gone into town and experienced a heart-turning epiphany watching Olivier and Caine tear it up in a London stage production of Ira Levin’s house-of-mirrors story, Sleuth. When some days later his commanding officer asked if he wanted to “re-up,” as his obligatory four year enlistment was coming to an end, Kenney respectfully declined. “No, sir. I have to get home.” “Trouble with family?” “No, sir. I have things I want to do.” “What do you want to do with your life, airman?” “I want to be an actor, sir,” Kenney said. “An actor? You’re kidding!” the CO said, to which Kenney’s response was a sudden, rhapsodic pouring out of his feelings about Olivier, Caine, the play he’d seen. “It just moved me no end, sir!” Kenney remembers holding his hand to his chest as he spoke. Picture a fresh-faced kid in Khakis who has just glimpsed his place in the firmament. After a few minutes, the CO waved his hands in surrender. “Okay, airman, I can see by the way you’re talking and the way you’re feeling you are not going to re-up. I’ll drop it.” Back in the States, Kenney was determined to become an actor but had to earn a living. He and a girlfriend

worked at the San Antonio ranch of FedMart millionaire Morris Jaffe, and through that connection was promised a job at the FedMart corporate office in Covina. Kenney jumped at the chance, which didn’t pan out, though he’d finally made it to California. He worked days as a draftsman designer (the trade he’d learned in the service) and nights doing whatever he could to get into the acting game, finally joining the only theater group in the Los Angeles phone book with an opening, and taking what they had to offer; sound effects and a couple of non-speaking walk-ons in a production of The Deputy at the Gallery Theater. “I go in, it’s my big shot,” Kenney says now. The house was packed, the lead actor was “out in the desert doing a Gunsmoke episode,” and suddenly the understudy calls in sick. The producers are going to cancel the show, tell the ticketholders to line up for refunds. They’re pulling their hair. Kenney raises his hand. “Hey, uh… I know all the lines.” Heads swivel and they look at the kid, blinking. “Yeah, I know every word, man.” They hurriedly start throwing scene and line references at him in the wings. He knows every word, comma, and period. By heart. “I was the sound guy,” he says, laughing. “I knew everyone’s lines!” Flabbergasted and seeing a way out, they rushed him into costume and crossed their fingers. Kenney took the stage and killed it, saving the evening, quelling the producers’ acid reflux, and opening a door.

Unbeknownst to Kenney, a talent agent had sidled into the audience. She’d been scouring the town at Gene Roddenberry’s desperate behest, looking for a young actor with a particular quality. They’d almost given up, and the fate of a struggling new series hung in the balance. Forty years later, Star Trek’s supervising producer, Bob Justman, would tell Sean Kenney, “if we hadn’t found you, there wasn’t going to be a ...continued p.31

Who is Sean Kenney

MICHAEL CAINE AND LAURENCE OLIVIER TURNED A YOUNG AIRMAN INTO A HORRIBLY DISFIGURED STARSHIP CAPTAIN. AND HE LOVES IT!