Welcome to the Lark 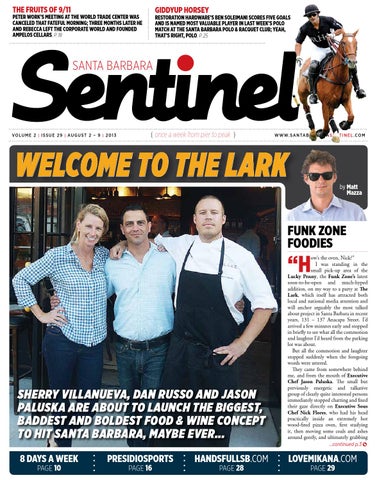 once a week from pier to peak

WELCOME TO THE LARK

Sherry Villanueva, Dan Russo and Jason Paluska are about to launch the biggest, baddest and boldest food &amp; wine concept To hit Santa Barbara, maybe ever... 8 DAYS A WEEK PAGE 10

ow’s the oven, Nick?” I was standing in the small pick-up area of the Lucky Penny, the Funk Zone’s latest soon-to-be-open and much-hyped addition, on my way to a party at The Lark, which itself has attracted both local and national media attention and will anchor arguably the most talked about project in Santa Barbara in recent years, 131 – 137 Anacapa Street. I’d arrived a few minutes early and stopped in briefly to see what all the commotion and laughter I’d heard from the parking lot was about. But all the commotion and laughter stopped suddenly when the foregoing words were uttered. They came from somewhere behind me, and from the mouth of Executive Chef Jason Paluska. The small but previously energetic and talkative group of clearly quite interested persons immediately stopped chatting and fixed their gaze directly on Executive Sous Chef Nick Flores, who had his head practically inside an extremely hot wood-fired pizza oven, first studying it, then moving some coals and ashes around gently, and ultimately grabbing ...continued p.3

Welcome to the Lark

Sherry Villanueva , Dan Russo and Jason Paluska are about to launch the biggest, baddest and boldest food & wine concept to hit Santa Bar bara , maybe ever...