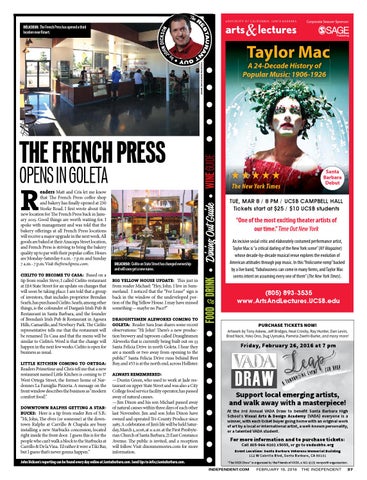 CIELITO TO BECOME TU CASA: Based on a

tip from reader Steve, I called Cielito restaurant at 1114 State Street for an update on changes that will soon be taking place. I am told that a group of investors, that includes proprietor Brendan Searls, has purchased Cielito. Searls, among other things, is the cofounder of Dargan’s Irish Pub & Restaurant in Santa Barbara, and the founder of Brendan’s Irish Pub & Restaurant in Agoura Hills, Camarillo, and Newbury Park. The Cielito representative tells me that the restaurant will be renamed Tu Casa and that the menu will be similar to Cielito’s. Word is that the change will happen in the next few weeks. Cielito is open for business as usual. LITTLE KITCHEN COMING TO ORTEGA:

Readers Primetime and Chris tell me that a new restaurant named Little Kitchen is coming to 17 West Ortega Street, the former home of Nardonnes La Famiglia Pizzeria. A message on the front window describes the business as “modern comfort food.” DOWNTOWN RALPHS GETTING A STARBUCKS: Here is a tip from reader Rex of S.B.:

“Hi, John, The elves (or someone) at the downtown Ralphs at Carrillo & Chapala are busy installing a new Starbucks concession, located right inside the front door. I guess this is for the people who can’t walk a block to the Starbucks at Carrillo & De la Vina. I’d rather it were a Tiki Bar, but I guess that’s never gonna happen.”

DELICIOSO: Cielito on State Street has changed ownership and will soon get a new name.

from reader Michael: “Hey, John. I live in Summerland. I noticed that the “For Lease” sign is back in the window of the undeveloped portion of the Big Yellow House. I may have missed something — maybe no Pace?” DRAUGHTSMEN ALEWORKS COMING TO GOLETA: Reader Sara Jean shares some recent

observations: “Hi John! There’s a new production brewery and taproom called Draughtsmen Aleworks that is currently being built out on 53 Santa Felicia Drive in north Goleta. I hear they are a month or two away from opening to the public!” Santa Felicia Drive runs behind Best Buy, and #53 is at the north end, across Hollister. ALWAYS REMEMBERED:

—Dustin Green, who used to work at Jade restaurant on upper State Street and was also a City College food service facility operator, has passed away of natural causes. — Jim Dixon and his son Michael passed away of natural causes within three days of each other last November. Jim and son John Dixon have owned and operated Tri-County Produce since 1985. A celebration of Jim’s life will be held Saturday, March 5, 2016, at 11 a.m. at the First Presbyterian Church of Santa Barbara, 21 East Constance Avenue. The public is invited, and a reception will follow. Visit dixonmemories.com for more information.

eaders Matt and Cris let me know that The French Press coffee shop and bakery has finally opened at 250 Storke Road. I first wrote about this new location for The French Press back in January 2015. Good things are worth waiting for. I spoke with management and was told that the bakery offerings at all French Press locations will receive a major upgrade in the next week. All goods are baked at their Anacapa Street location, and French Press is striving to bring the bakery quality up to par with their popular coffee. Hours are Monday-Saturday 6 a.m.-7 p.m. and Sunday 7 a.m. - 7 p.m. Visit thefrenchpress.com.

DÉLICIEUX: The French Press has opened a third location near Kmart.

“One of the most exciting theater artists of our time.” Time Out New York An incisive social critic and elaborately costumed performance artist, Taylor Mac is “a critical darling of the New York scene” (NY Magazine) whose decade-by-decade musical revue explores the evolution of American attitudes through pop music. In this “frolicsome romp” backed by a live band, “fabulousness can come in many forms, and Taylor Mac seems intent on assuming every one of them” (The New York Times).

Support local emerging artists, and walk away with a masterpiece!

At the 3rd Annual VADA Draw to benefit Santa Barbara High School’s Visual Arts & Design Academy (VADA) everyone is a winner, with each ticket buyer going home with an original work of art by a local or international artist, a well-known personality, or a talented VADA student. 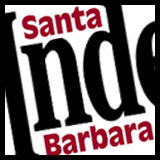