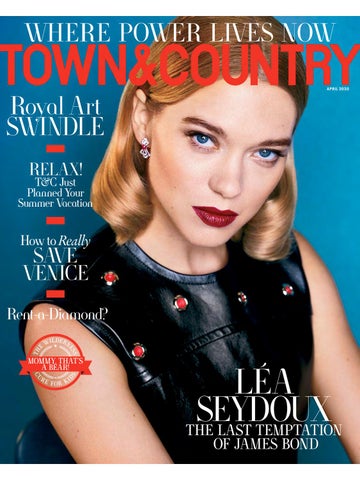 You Can’t Repeat THE PAST

Unless you use Golconda diamonds and Colombian emeralds and make them new. BY JILL NEWMAN

infusing his designs with colorful gems and a sense of movement that didn’t exist in the floral and bow shapes of the Edwardian era. Cartier’s iconic Tutti Frutti collection, with its playful explosion of cabochon and carved emeralds, rubies, and sapphires, was born of this India obsession. The stylistic mingling went in both directions. Indian royals brought trunks of gemstones to Paris for maisons to reimagine in a fusion of Eastern and Western styles, such as when the maharajah of Patiala arrived at the Place Vendôme in 1928 with 566 carats of diamonds and 7,800 carats of emeralds and commissioned Boucheron to make 149 elaborate pieces. Today the Indian style has evolved in the hands of a new generation. Delhi-based Hanut Singh uses Indian stones in Art Deco–esque designs inspired by his own family jewels. Bina Goenka modernizes traditional motifs;

she set her floral ruby earrings in red rhodium gold, creating the illusion of stones floating in space. Sabyasachi Mukherjee’s jewelry, which is now at Bergdorf’s, alludes to his childhood in culture-rich Calcutta. Siddharth Kasliwal, the ninth-generation steward of Munnu the Gem Palace, pairs old Indian stones with bold enamel, while Jaipur’s Krishna Choudhary, whose family has been trading Golconda diamonds for more than a century, designed his first collection, Santi, using historic gems purchased from India’s noble families. Sanjay Kasliwal’s children are carrying on the family legacy with eclectic designs (think bohemian necklaces dripping with cabochon stones), and Chand Bihari Saboo’s sons are evolving the company founded by their father in 1935 by procuring the rarest gems from mines around the world. The flamboyant history, the mouthwatering color, the striking design—how can anyone, then or now, resist?�

en and a half million dollars: That’s how much a rare ruby and diamond ring by Viren Bhagat fetched at a Sotheby’s auction in October 2017. As with most of his pieces, that was way above the estimate. Hailed as India’s greatest modern-day jeweler, Bhagat is famous for tracking down historic stones—rare pigeon’s-blood rubies, Kashmir sapphires, Colombian emeralds, Golconda diamonds—to set in his masterpieces. So coveted are his creations (he makes only 60 a year) that loyal clients go to his appointment-only Mumbai workshop and purchase designs based on sketches alone. Last month, at TEFAF Maastricht, the sprawling art, design, and antiques fair in the Netherlands, the elusive jeweler expanded his fan base. In his first public show ever, Bhagat unveiled 25 pieces that reflect his signature aesthetic—classic Indian motifs of lotus flowers and paisleys rendered in Art Deco–style lines—but that, for the first time, featured semiprecious stones such as lapis, opal, and turquoise. “Our pieces are feather-light because we make the platinum metal evaporate, allowing the stones to capture the light and shimmer,” says the jeweler, who was one of two contemporary designers (the other being JAR by Joel A. Rosenthal) featured in the Al Thani collection, the Qatari royal family’s exceptional trove of jewelry and artifacts spanning the last 500 years. Christie’s sold 400 pieces from that collection last fall for more than $100 million. Since the early 20th century, European jewelry houses have been captivated by the Indian aesthetic. Jacques Cartier was so enamored of what he saw on a visit to Delhi in 1911 that he returned to Paris and began

April will be volatile, full of opportunities, power struggles, and breakthroughs. Mars, your ruler, will be traveling through the most individualistic sign of the zodiac, so be true to yourself no matter what. Just remember that being reasonable and logical will be the ticket to success; after the 25th you’ll have a clearer idea how crucial situations are going to unfold.

With mighty Mars in Aquarius, you’ll be feeling assertive and daring. But with the Sun in the most hidden angle of your chart until the 19th, be ready to lay groundwork before leaping into action. You’re entering a new cycle in which you’ll be in a better position to go after your goals, and the new Moon of the 23rd spurs you toward new success.

With heavenly Venus entering your sign on the 3rd and remaining—most unusually—until early August, you seem to be on a roll. The Sun in Aries accents new horizons until the 19th, so this is a time when you should cover new ground and explore opportunities. After the 20th life is likely to quiet down, although travel and romance beckon.

The Sun is at the top of your chart for most of April, putting you on display and giving your actions more impact. Whatever is going on in close relationships and business partnerships is a game changer, and you can get your life on a more fulfilling track. It’s time to have those frank discussions you’ve been avoiding—so don’t hold back.

With Mars, the god of war, in your opposite sign of Aquarius, others will be more inclined to oppose you than usual. Your worklife, on the other hand, is full of brilliant opportunities, and travel is accented until the 20th, when the Sun touches the zenith of your solar chart, attracting attention your way. Try to postpone difficult choices near the 28th.

Being bold and entrepreneurial is a theme for Virgos now that Jupiter has moved into Capricorn, and this month you appear to be hitting the jackpot—or at least coming up with brilliant plans. April will be a time when you need to sort out your priorities and make discriminating choices. Venus at your zenith enhances your charm.

The Sun in Aries intensifies your desire to keep the right balance between your needs and others’, and Jupiter is opening your eyes to new lifestyle options. Be ready, too, to tap into your creative talents and splash out socially as adrenalizing Mars speeds through Aquarius. The new Moon of the 23rd emphasizes sensible financial decisions.

With aggressive Mars out of harmony with your sign, you’ll be charged up, especially around lifestyle issues. With all the energy you’re expending, you’ll accomplish much and get a grip on your affairs. Once the Sun enters Taurus on the 20th, be prepared to hear others out. Compromise will prove to be the only way to avoid time-wasting standoffs.

Intriguing options abound this month, so pursue your visions and dare to be different. Romantic Venus is waltzing through your relationship angle, which sweetens all your contacts, and the Sun highlights entertainment and entrepreneurial endeavors. The challenge is to know when to set limits, especially on the financial front.

Jupiter’s presence in your birth sign is all about confidence, and Venus is urging you to put creative ideas into play. Home and lifestyle issues are also in the spotlight, and it’s time to find new solutions to old problems. Aspects involving Mercury, the mind planet, indicate that you need to do some careful finetuning before you make commitments.

Powerful Mars in your sign energizes you to assert your will this month. And you will be thinking very clearly and getting others’ attention. Jupiter’s presence in Capricorn is like having an angel sitting on your shoulder, and you can make some extremely well-timed moves this month and be helpful and supportive in situations that demand finesse.

Exploring new venues and options will take you in the right direction this month, and this is also the time to make savvy financial moves. Be sure, though, to resist attempts to control you, especially near the 14th; refuse to take a passive role. With heavenly Venus at the foundation of your chart, it’s also time to strengthen the ties that bind.

FOR ADDITIONAL READINGS BY KATHARINE MERLIN, GO TO TOWNANDCOUNTRYMAG.COM AND KATHARINEMERLIN.COM