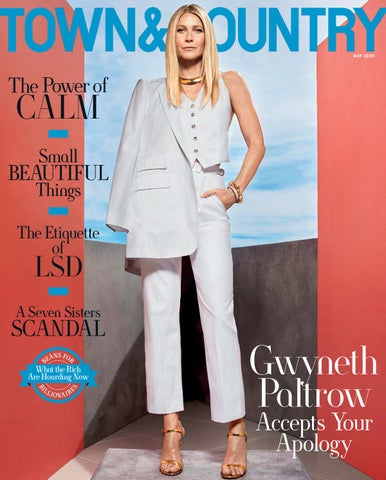 What the Rich Are Hoarding Now IO NA I R

A certain amount of back-and-forth with others is in the air this month, but you’ll also be creating an inspiring path forward. You will be thinking very clearly and making wellinformed decisions, especially near the 9th. Financial details may be elusive, because others are wavering, but by the new Moon of the 22nd, you’ll be ready to move ahead with your plans.

Early this month, behind-the-scenes strategizing will set the scene for success. Once feisty Mars hits the top of your solar chart on the 13th, you’ll be entering a demanding period. Venus’s long voyage through your sign makes you a magnet for others’ admiration right now, but with Venus out of sync by midmonth, mutual plans may stall.

May will start on a lively note, with the Sun highlighting the most outgoing part of your chart and a full Moon in passionate Scorpio on the 7th. You have opportunities to reach agreements with associates, but with several planets going out of sync by midmonth, and the Sun in hiding, don’t resist the urge to go private.

Mars in Aquarius has been whipping up energy—and sometimes antagonism— in various relationships, but your aspects point to chances to talk things out. And with charming Venus in Gemini, your social horizons are full of sparkle. After the 15th, though, it’s time to put on the brakes and reassess; follow-through will be crucial.

Until midmonth, communication with those near and far is in the spotlight, and Mars in Aquarius means your dynamic presence will make you a star at work. Once Mars enters your relationship angle on the 13th, though, you’ll have to make an effort to be diplomatic. Still, the new Moon of the 22nd gives your plans a thumbs-up.

Libras are less obsessed with money than most, but with the Sun in earthy Taurus until the 20th, it’s time to get finances on a promising new track. Talk to experts and scrutinize your options. Travel may beckon during the latter part of the month, and you’re entering a period when you need to follow through on what you’ve started.

Your closest relationships demand attention early this month. Adrenalizing Mars at the foundation of your chart whips up pressure to complete work projects, but after the 13th don’t hesitate to throw yourself into creative and social endeavors. The new Moon of the 22nd promises to be a financial and emotional page turner.

With your ruling planet changing direction midmonth, you need to shift gears. As May begins you should focus on completing projects and reaching agreements. But after the 16th it’s all about relating, connecting, and communicating. Business and personal ties are in a positive state of transition, so be optimistic and diplomatic. ARMAN SARKISYAN �$14,560�, BERGDORF GOODMAN.COM

With driven, feisty Mars in your sign until the 12th, you’ll be unstoppable, and with the Sun in the part of your solar chart that’s all about your personal life until the 20th, you’ll also be ready to make changes. The most interesting developments in your planetary picture, though, seem to involve your social life and tapping into your talents.

Whatever is going on in your personal life in May, stop and think instead of rushing ahead; patience will pay off. In the meantime travel is briefly in the spotlight this month, as are opportunities to explore new options and associations. Don’t be shy about demanding details, and be ready to put your expectations on the table.

A lot of positive planetary energy is in the air early this month, so make the most of opportunities to pursue cherished plans. Be ready to take stock once Jupiter goes out of sync on the 14th. Taking on as much as you can handle could become an issue if you aren’t comfortable saying no. The 22nd is all about closing some doors and opening others.

Mars in Aquarius has been encouraging you to explore new venues and situations. But with the Sun in practical Taurus this month, you’ll also need to do some reality testing and careful fine-tuning. It’s time to pursue your ambitions, but with Venus, the planet of love, turning tail on the 13th, be careful not to neglect those who matter.

FOR ADDITIONAL READINGS BY KATHARINE MERLIN, GO TO TOWNANDCOUNTRYMAG.COM AND KATHARINEMERLIN.COM